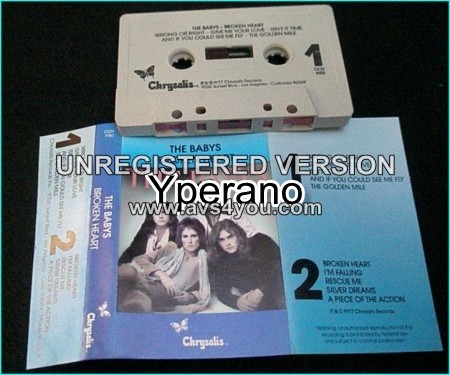 On Broken Heart, the Babys make good on the sense of potential that was only hinted at on their debut release. The band found a sympathetic producer this time out in Ron Nevison, who applied the same basic production strategy he used on Lights Out for UFO: He gives the band a sharp, precise recording that fully brings out their power while balancing out the heavier elements of their sound with sophisticated orchestrations that broaden their sound into a cinematic realm. The Babys live up to this ambitious style of production by stepping up to the plate with a collection of songs that are tight, catchy, and full of rock & roll conviction. Highlights include “”Give Me Your Love,”” a steamy mid-tempo rocker that shows off Michael Corby skill at the keyboards, and the title track, which balances its hard-hitting attack with catchy pop hooks to create an effective, guitar-driven slab of power pop. Broken Heart also gave the Babys their first taste of singles chart success with one its few outside contributions: “”Isn’t It Time”” is an effective power ballad that alternates lush, orchestrated verses with a fiery chorus driven by female backup vocals and a punchy horn arrangement. The end result is an album that is a quantum leap forward from The Babys in every way. Broken Heart is undoubtedly one of the crown jewels in the Babys’ catalogue and a worthwhile listen for any fan of big-production AOR rock.

Broken Heart, has a much more polished sound to it with string overdubs added to some songs, and is their best album in my opinion. The big hit, “”Isn’t It Time””, “”Wrong or Right””, “”A Piece of the Action””, and the title cut, “”Broken Heart”” are good listens.

Song Titles:
Wrong Or Right
Give Me Your Love
Isn’t It Time
And If You Could See Me Fly
Golden Mile

Silver Dreams
A Piece Of The Action

Broken Heart is a fine alblum. The Best …though…..you never burn out on ……It just gets better! B.Heart…part of my Vision…. of The Golden Mile

Subject: The Babys – a correction.

FYI:
You have me listed as ‘Rhythm Guitar’ on your Babys product which is our 1st Chrysalis album. On this album, I played the Lead Guitar on:
Looking For Love
If You’ve Got The Time
Read My Stars.

An understandable error, as I played no solos on our 2nd Chrysalis album and therefore declared myself to be rhythm guitarist on that album.
However, before that, as on your product, The Babys was a 2 x lead guitarist band.

Hopefully, I have been able to straighten this one out.

Respectfully yours ever ,
Michael Corby
The Babys.”