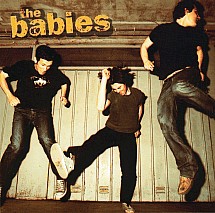 Babies from Zagreb, Croatia are definitely one of the best surprises I got for review this year. Supercool mix of late 70s rockin’ punk and garage punk, just the way I like. If you like Slaughter And The Dogs, Real Kids and similar stuff – you will love The Babies. Great vocal, loud punk guitars, cool riffs, pumpin’ rhythm section and simply fantastic songs – do you need more?! 14 songs – 12 originals (all in English) and 2 covers (Jonathan Richman and Slaughter And The Dogs). Some of my favorites: ‘Want You’, ‘Hard Rock Asshole’, ‘1973 Kicks’, ‘Burn This Town’, ‘Not Your Lil’ Doll’ and shes Gone’. Highly recommended!!!!!!!!!!

THE BABIES (named after 1977 punk classic song: ”Boston Babies” – SLAUGHTER & THE DOGS) are garage punk’n’roll trio from Zagreb/Vinkovci, Croatia. They’re playing furious screamin’ punk’n’roll in style like THE STOOGES, THE DEAD BOYS, THE SAINTS…
Known as energetic and wild live performers, in this moment one of the most perspective bands in their country, honestly addored by local rock-press and audience. Their debut CD album “The Babies” (Dancing Bear Records, 2003) is finally available!
Also shared stage with bands like: NEW BOMB TURKS, NASHVILLE PUSSY, THE CYNICS, ZEKE, THE COSMIC PSYCHOS, THE DIRTYS, SPEEDBALL BABY, WANDA CHROME AND THE LEATHER PHARAOHS, STREET WALKIN’ CHEETAS, THE BAMBI MOLESTERS and many many others…

“Babies from Zagreb, Croatia are definitely one of the best surprises I got for review this year.Great vocal, loud punk guitars, cool riffs, pumpin’ rhythm section and simply fantastic songs – do you need more?!” [NO BRAINS ZINE – Holland]

“Unlike most of our bands, THE BABIES are one of rare bands who know whats rock’n’roll, how the guitars scream, how to pump the rythm section, how to roar on the microphone… In these parts, the last time when this kind of pure r’n’r debut album was released, were the times of debut albums of bands like PARTIBREJKERS and MAJKE.” [VIP MUSIC]

Johnatan Richman cover (NOT one of their best songs though)

A mix of both
Woods’ indie melodies meet Vivian Girls’ fuzz in this collaboration of Kevin Morby of the former and Cassie Ramone of the latter. The Babies’ first record truly is a mix of both bands; 60s sped-up harmonies sung in a Titus Andronicus style over Sonic Youth Daydream Nation and Experimental Jetset chord changes. Kevin and Cassie are `Partners in Crime’ in this interesting side-project that never reaches the level of the parent bands, but is still worth a few spins.

Great from beginning to end
It is fairly common to buy an album and only like one or three songs on it. That is not the case here. Every song is reallllllly good! And, I must say, it is not because they found a formula that appeals to me and repeat it on every track. No. This is a very varied musical album. Some songs are poppy, some are folky, a couple are surfy, and one is straight up punk rock (Personality). I was already a fan of Woods and Vivian Girls, and other bands oft promoted to be of similar ilks, like Ty Segall, Coasting, Strange Boys, Best Coast, Dum Dum Girls, Iron & Wine, Thee Oh Sees, etc., but this album is definitely one of my favorites. And my 4 year old even likes it and sings along.