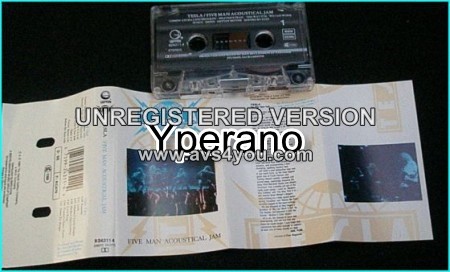 Five Man Acoustical Jam is a live album released in 1990 by the band Tesla, using acoustic guitars instead of the electric guitars for which hard rock/heavy metal bands such as Tesla are traditionally known. The biggest hit from the album was the song “Signs”, a cover version originally from the band Five Man Electrical Band, who also had a hit with the song (Tesla’s version included a use of “fuck” not in the original version). Other songs included “Love Song” and “The Way It Is” (hits from their previous album The Great Radio Controversy) and covers of The Rolling Stones’ “Mother’s Little Helper“, Creedence Clearwater Revival‘s “Lodi“, and The Beatles’ “We Can Work It Out“. It was recorded live in Philadelphia, Pennsylvania, at the Trocadero Theatre during a short run of acoustic shows organised to fill downtime while supporting Mötley Crüe on a leg of their Dr. Feelgood tour.

It may have started as a happy accident but Tesla’s Five Man Acoustical Jam ushered in the MTV Unplugged era. No biggie…

It was the biggest hit of Tesla’s career, a live acoustic album that sold more than a million in America, and yielded a Top 10 single with a cover of a great old song from the early 70s; an album that was praised, from on high, by Jimmy Page.

“The funny thing about Five Man Acoustical Jam,” says Tesla’s bassist Brian Wheat, “is that it was really kind of an accident.” And funniest of all was what the band’s co-manager Peter Mensch told them to get the ball rolling. “You’d have to be really great musicians to pull this off,” Mensch said, “and you’re probably not good enough…” As Wheat says now: “Peter was challenging us. And thank God he did.”

The happy accident of Five Man Acoustical Jam was the result of a number of small things falling into place. In the late 80s, the band, from Sacramento, California, had made a flying start. Their debut album Mechanical Resonance – ballsy, all-American hard rock – had gone platinum. They had toured in arenas, opening for Poison, David Lee Roth and Def Leppard; the latter also managed by Peter Mensch and Cliff Burnstein’s company Q Prime. And in the summer of 1990, following a second platinum album, The Great Radio Controversy, Tesla were booked on another huge tour as support to Mötley Crüe. The problem for the young band was that they were still heavily in debt to their record company, Geffen.

“Mötley Crüe were playing three days a week,” Wheat says, “but we couldn’t afford too many days off. On a purely economic level, we needed to fill those days.”

Mensch offered a solution. In early 1990, Tesla had performed at the Bammys – the California Bay Area’s answer to the Grammys – at which they played an acoustic version of the ballad Love Song, a Top 10 hit in the US. A few days later, Mensch received a letter from the owner of a club in San Francisco, named Slim’s, asking if Tesla would do an acoustic show there. When Mensch put the suggestion to the band, it was not, Wheat recalls, well received. “Fuck no!” they said. “We’re a hard rock band, man!”

Frank Hannon picked The Grateful Dead’s Truckin’, which was incorporated into a slow boogie rendition of the band’s own Cumin’ Atcha Live. Tommy Skeoch chose the Rolling Stones’ ode to pill-poppers, Mother’s Little Helper. Drummer Troy Luccketta chose a song about the town in California where he was born, Lodi, by Creedence Clearwater Revival. For Wheat, it had to be a number by his favourite band, The Beatles. He picked We Can Work It Out. There was also, Wheat says, a Beatles influence applied to one of the band’s own songs: a new arrangement of Paradise, simplified in the style of Golden Slumbers from Abbey Road.

It was Wheat who suggested to Mensch that one of the six shows should be recorded and filmed. “I wasn’t thinking about an album,” he says. “I just thought we should record one for the archives. So we looked at what fit the schedule, and it was Philadelphia on July 2.” In hindsight, Wheat wishes they had been able to record their very first acoustic show, the opening night at Slim’s. It was, he says, “the best of the six”. Better, certainly, than the second night in that place, where all the band were, by Wheat’s admission, “fucking drunk”. And better, in his opinion, than the Philadelphia show, which was squeezed in between Mötley Crüe gigs in New York state and Pennsylvania.

“The venue in Philly was the Trocadero,” Wheat says. “A little theatre club, kind of rundown. Not a real nice place, and not very big. Maybe held a thousand people. The audience was great, but the actual performance was the least tight of all those shows. In fact, we all felt that show was the worst of the bunch.” It was only later, when they listened back to the recording, that they realised what they had. What was captured on tape that night in Philly had, in Wheat’s words, “an incredible vibe to it”.

Those tapes lay untouched for two months until Cliff Burnstein got a call from rock radio station WAAF in Boston, telling him that Tesla’s acoustic performance of Signs, recorded live to air at the station, had become one of the top five most requested songs among WAAF listeners. Once Burnstein had relayed the news to Geffen, the label gave the green light for a live EP to be made from the Philadelphia tapes. But when the band played them again, they had a different idea. “It sounded so cool,” Wheat says. “Not technically brilliant, but it had this energy and rawness. So we thought, let’s mix the whole show and make it a full album.”

Opinion within the band was divided. “Jeff and I were into it,” Wheat says. “Tommy and Frank said it didn’t sound good. But I said, ‘It sounds as good as Aerosmith’s Live! Bootleg, and we all love that.’ So that was kind of the clincher.”

There was an instruction from Geffen to clean up the recordings: to add a little polish with overdubs, as was the case with successful live rock albums such as Thin Lizzy’s Live And Dangerous. This request was rejected flat out.

“They asked if we could fix some vocals,” Wheat says. “But we said no. It’s not a live album if you do that.”

The success of this album and single was not entirely without precedent. Many other rock groups before Tesla had hits with acoustic songs, such as Poison with Every Rose Has Its Thorn, and Guns N’ Roses with Patience. But at a time when MTV Unplugged was still in its infancy – years before Nirvana and Alice In Chains had hit Unplugged albums – Tesla did it without the power of MTV’s branding. Wheat laughs off the notion that his band were, in this sense, pioneers.

“I’ve had people tell me that we started that whole thing,” he says. “But MTV Unplugged was already going before Five Man Acoustical Jam. So really, we didn’t start shit.”

He does, however, speak with great pride about a conversation he had with Jimmy Page just after the album was released.

“It was the first time I met him,” Wheat says. “A big deal for me, as I’m a huge Led Zeppelin fan. He said, ‘I love your acoustic album.’ I went, ‘Man, I didn’t think you knew who I was!’ And he told me, ‘You didn’t make the first acoustic album, but you made the first acoustic live album.’ When Jimmy Page deemed it cool – the guy that wrote so many great acoustic songs, especially on Led Zeppelin III – that was about as big a compliment as one could get, you know?”

For Wheat, it’s the energy in the band’s performance that really elevated the album; an energy that is also apparent in the accompanying video, Five Man Video Band. “You see us sitting on those bar stools,” he says, “and we’re all pretty fidgety. It wasn’t like we were all stoned and just sitting there. We’re really bouncing around. And part of that is nervous energy, because when you’re playing acoustic, whatever you play has got to count. You don’t have the luxury of a big-ass Marshall stack at the back of you with a bunch of distortion. You’re kind of out there naked.”

What that album also proved, in its raw state, was that Tesla were one of the great American rock bands of that era. The best of the band’s original songs – Modern Day Cowboy, The Way It Is, Love Song– had the same classic feel as the old hits they played. And Jeff Keith sang them all brilliantly, no more so than in the intro to Gettin’ Better.

“In the late eighties/early nineties there were a lot of image-driven bands,” Wheat says. “Bands that had a lot of hairspray. People tend to throw Tesla into that bag but we weren’t like that. For one thing, we weren’t very good-looking guys! What I’m most proud of about that acoustic record is that it set us apart from those image bands. People realised, hey, these guys can play!”

Looking back on Five Man Acoustical Jam, Brian Wheat has only one regret. “We should have done a Zeppelin song.” Other than that, this happy accident, in its ragged glory, turned out pretty much perfect. “We didn’t set out to make this big statement,” he says, “but that record had something to it, a charm, that connected with people. It was such a cool thing to do, and it became this classic acoustic album.”