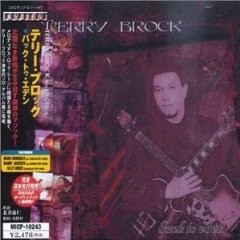 The talent of singer Terry Brock is beyond question. His rich, soaring tenor has been part of Strangeways, The Sign, and (as backup vox) projects from Kansas, Britny Fox, Michael Bolton, and many others. Now, with “”Back To Eden,”” he delivers the same expressive singing on his own brand of deep, atmospheric A.O.R. Some of the tracks have a Strangeways-ish, keyboard-polished feel. Some have a Midwestern AOR depth to them, like the strong, Jim Peterik-penned title track. Others are even more ambitious, with the pomp majesty of The Sign. Throughout, the album’s energy and sound are wonderful, aimed perfectly for fans of Brock’s past bands. Despite (or perhaps because of) the practiced proficiency that pervades the album, “”Back To Eden”” feels more like a return to familiar sounds than anything distinctive or new.

5.0 out of 5 stars The Greatest Voice In Melodic Rock Today!!,
You need to get this one! Terry Brock is the most “”in demand”” voice in melodic rock today. He has just been announced as the new frontman for “”Giant””! He has backed up everyone from Kansas to Giant to Seventh Key to danny vaughn, as well as being lead singer for mike slamer and strangeways (if you have never heard of some of these bands, you need to get them too!) Now he has his first solo album, and it’s a real gem! Terry also sings with the band “”the sign””, which you need to get too. It’s almost as good as this one. Terry Brock has written the 3 best songs in rock history with “”Jaded”” from Slamer’s “”No-Where Land””, “”Love Lies Dying”” from Strangeways, and the very best rock song EVER right here on this album, “”Coming Home.”” Terry probably has no “”pure voice”” rival outside of steve perry. (and that is a mouthful)

5.0 out of 5 stars AOR Modern Classic!!!,
Terry Brock is the Ex Strangeways & The Sign singer. He has worked or backed up artists such as Michael Bolton, Seventh Key, Michael Gleason and Mike Slammer. His most notable work was his Strangeways CD and Michael Bolton’s – Everybody’s Crazy. His voice is very unique and very strong. He sings with passion and you love to listen to his CD’s. This CD is in the vein of the Strangeways sound and he delivers yet again. This was one of the best CD’s in 2001 in this genre and you will soon tell why. From beginning to end, there are no fillers and the song writing is very good. If you love bands like Journey, Strangeways, Alias, Survivor and Bad English this CD is for you.

5.0 out of 5 stars Wow, what a great Melodic Rock CD….
Terry Brock’s vocals soar on this masterpiece. Add in
heavy, catchy guitar riffs and classic melodies and you
have one hell of a CD. If you like Survivor, Journey
or any type of melodic rock, you will love this CD.
“”Forever Now””, “”Waiting””, “”Need someone to Love”” are stand outs.
You will feel the Survivor influence on “”Back to Eden””.

One of the best CDs I have bought.”