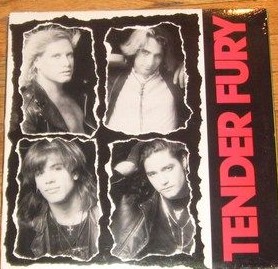 dimension: 10 track album
label: Posh Boy Records 1988
Tender Fury featured two founding members of T.S.O.L., Jack Grisham and Todd Barnes. Robbie Allen and Daniel Root were the other original members. Obviously, by the time Tender Fury signed to Posh Boy in 1987, Fields and Grisham had resumed their friendship; the punk public was to believe for many more years that Posh Boy had ripped off T.S.O.L.. The truth was rather more complex. This album was released in 1988, initially bearing the Posh Boy logo and Posh Boy catalog number. After receiving support from the late Rick Carroll, program director at KROQ-FM, the album was re-released through CEMA (Capitol Records) distribution and promptly died and went to the cut-out bins.

SIDE B: *What We Got, *Running Around Again, *Let It Go, *Mercy Ride, *Look Back In Anger