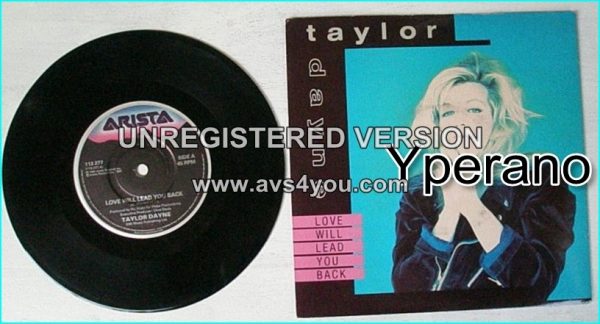 Taylor DAYNE: Love Will lead you back 7″ UK with different cover and B side Check video

“Love Will Lead You Back” is a song performed by Taylor Dayne. Released as the second single from Daynes second album Can’t Fight Fate (following the more uptempo “With Every Beat of My Heart”), the ballad debuted on the Billboard Hot 100 chart on January 27, 1990. It reached number one on April 7 that same year and spent 15 weeks in the Top 40. It also reached number one on the Billboard Adult Contemporary chart and was certified Gold in the U.S. by the RIAA.

Diane Warren
The song, written by Diane Warren, is about a woman who is willing to set her lover free because she is confident that one day his love will lead him back to her: “Sometimes it takes some time out on your own now / to find your way back home”. Warren has stated that she began writing the song while in a hotel in Russia, and that she had originally intended the song to be offered to R&B singer Whitney Houston, but Arista Records president Clive Davis wanted to let Dayne record the song. It became Daynes only Number One single.

Music video
The video was very simple; it shows Dayne and her band in a studio performing the song. The video was released both in black-and-white and sepia tones. In the video, Dayne holds in her hand what seems to be the lyrics of the song, or possibly a letter from her lover.