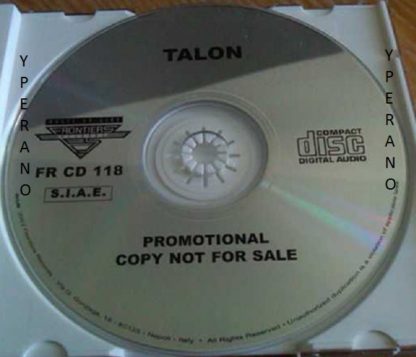 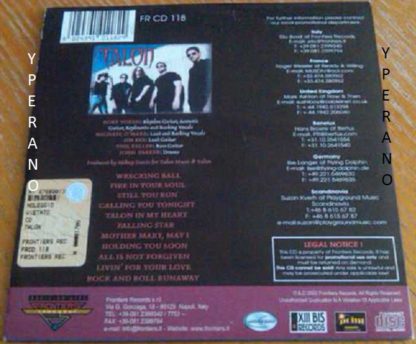 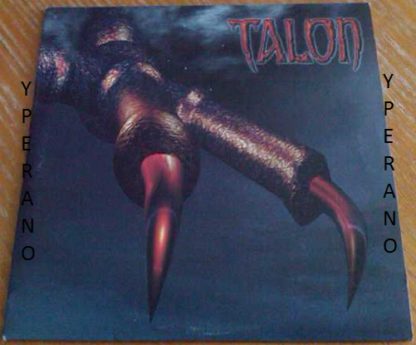 TALON sounds a bit heavier than Melodic Rock and songs like “Wrecking Ball” or “Talon In My Heart” further strengthen this impression, appears to be in the more crunchy Metal-drawer, contrary to most that Frontiers Records usually has to offer.The songs are very catchy (maybe just because of that), you can hum along most of the tracks at first listen. Michael O’Mara has a good voice, the songs are nice to hear and a “Fire In Your Soul” (reminds us a bit of RADAKKA or RIOT ACT to name two a bit newer bands) or “Talon In My Heart” are good ones.

Talon (formerly known as Voxen) is a five piece hard rock band from Northern California whose sound has been described as a cross between Dokken & the Scorpions. 11 tracks including, ‘Wrecking Ball’, ‘Fire In Your Soul’ & still You Run’.
——————————————————————–
5.0 out of 5 stars New metal…you bet.
One of the best new metal/rock bands I have heard from in a long time. Great guitar, reminds me of the crunchy, tap your feet groove of the Scorpions, along with excellent vocals make this a great effort. The songs stick with you from Wrecking ball to the end. Great hooks and nice lyrics. If you yearn for a better time, when music was fun and made you want ot whip out your air guitar…Talon Rocks.
——————————————————————–
5.0 out of 5 stars 3.5 stars – an upbeat modern melodic rock album
This 2002 self-titled album is the début from Northern California melodic rockers Talon; the band did release an album (1995s Sacrifice) under the name Voxen. Anyway, Talon is a melodic rock band that that seems to take influence from Dokken and the Scorpions. I hear some Bonfire in the bands sound as well.

This isn’t particularly ground breaking stuff, but it is a Frontiers release, so the quality level is pretty high. There are some great guitar hooks, memorable melodies, and the kind of rock choruses that you want to sing along with. The songs are all well written and have a strong 80s rock vibe, plus the inevitable mix of upbeat rockers and sappy ballads. I would have preferred a heavier overall sound, but this is still a totally decent melodic rock album.
If you’re a serious melodic rock fan and run across the album, by all means pick it up.
——————————————————————–

5.0 out of 5 stars Fun music with an edge
‘Talon’ (both the band and their self-titled album) definitely has all the key elements of good 80s hard rock – lyrics about angst-filled love, solid clean guitar riffs, interesting musical arrangements, screaming melodic vocals and rhythm thats both rockin’ and danceable. Vocalist Michael O’Mara at times is reminiscent of noted Quiet Riot front man Kevin DuBrow (when O’Mara is singing from the back of his throat). At other times, the tenor sounds like a combination of Sebastian Bach, Vince Neil and Jon BonJovi. Guitarist Jim Lee (or Kee, depending on which part of the album sleeve you read) demonstrates an influence by George Lynch and Matthias Jabs with a nod to Eddie Van Halen on occasion. Talons first album is one you can play at parties amongst friends who share in your joy, pain and love for good beer.