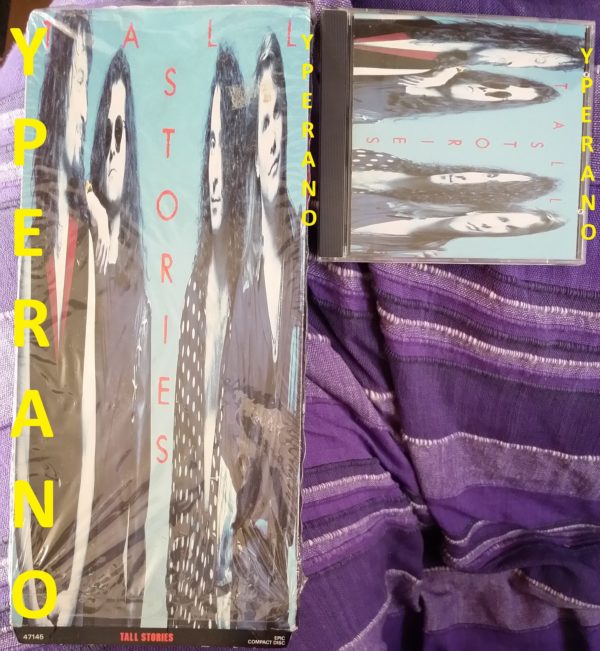 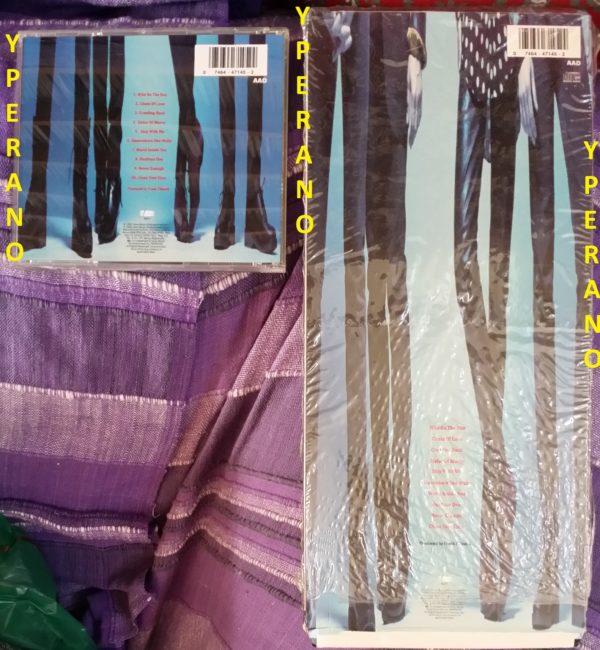 A longbox is a form of exterior paperboard packaging for musical compact discs in widespread use in the 1980’s and early 1990’s in North America.
When compact discs first began to appear in the retail stores, the longbox packaging served a transitional purpose, allowing shops to file new compact discs in the same bins originally used for vinyl records. Longboxes were 12″ tall, and capable of containing two separate discs when necessary

Tall Stories first rose to prominence upon the release of their self-titled debut album in 1991. At the vocal helm is Steve Augeri who previously provided the lead vocals for Journey, following Steve Perrys departure from the band.

Formed by Augeri with Jack Morer on guitars, Kevin Totoian on bass, and Tom DeFaria on drums, Tall Stories represents a group of musicians who were exposed and inspired by diverse sounds. Signed by Bud Pragers ESP Management, Tall Stories first album was produced by Frank Filipetti. While the musical climate in the United States in 1991 was going through a metamorphosis of its own, Tall Stories debut album was a breath of fresh air in the melodic rock scene at the time. The bands unique musical core immediately became a sensation with rock fans and critics alike.

A tour with Mr. Big followed, but despite the great response from fans, the evolving musical climate forced the band to take a step back and hibernate during that period. Steve Augeri went on to join Tyketto and then Journey but, along the way, the band continued to collaborate and write songs, while waiting for the right time to regroup as a band.

5.0 out of 5 stars You don’t have this??, Let me first say as a matter of perspective, I own over 66600 CDs and this one is in my top 10. You probably have never heard of this band or even their single (“Wild on the Run”) from 1991, but that is a crying shame. I worked in a record store back then and I can tell you that these guys did not get the label support they deserved. We’re talking real musicianship here. People have compared them to Journey but I have to say that Tall Stories stands alone. Journey is one of my favorite bands of all time (I own every CD they did with Perry and they’re in heavy rotation in my CD player) so I think I’m qualified to say no way. Tall Stories was not a Journey rip-off or a rip-off of any band. You’ve never heard such catchy tunes and emotion-charged vocals. Steve Augeri doesn’t sound like Steve Perry at all but he does do a fantastic job of singing his songs, and an even better job of singing Tall Stories’ songs. If you enjoyed the pop/rock of the late 80s/early 90s, this CD is a critical purchase. This is one of those few albums that is great from start to finish. “Wild on the Run” is a firecracker of a song with a really catchy tune. Many of the songs have a distinct blues and classic R&B influence all within the pop/rock frame of reference. And Steve Augeris vocals ooze sex appeal and heart on songs like “Restless One”. If you enjoy passionate, soulful singing like Steve Perry and Sam Cooke, you’re going to love Steve Augeri. As a side note, I had the pleasure of meeting Mr. Augeri while he was on tour with Journey and this guy is the sweetest, most humble, most down-to-earth rock star you could ever meet. He comes from humble beginnings, is truly grateful for the success hes found and for his fans, and is committed to delivering a powerhouse performance every time — you can feel it all the way back to Tall Stories. If you’ve never heard their music, you are in for a real treat. Its getting scarce these days so don’t procrastinate — BUY this fantastic CD. You won’t be disappointed!

5.0 out of 5 stars WOW! What a great cd!,
I bought this cd because I knew nothing of Steve Augeris works before Journey and I wanted to get a feel for his “sound”…boy this is great stuff. Its powerful and edgy with super musicianship. What a find! I really think all Journey fans should buy this cd to get a preview of what they can expect from the new singer. I wonder why this group never merited another album? Too bad.

5.0 out of 5 stars The best
Unfortunately, Tall Stories turns out to be a sad story about how the music industry is not interested in talented musicians and good music, but rather pretty boys and sexy chicks that can prance around the stage and have a good marketing imagine. While I am happy for the success of Steve Augeri as Journeys new frontman, I am sad for the other members of Tall Stories who never got the recognition they deserve.

5.0 out of 5 stars One of My Top 10 CDs, Ever
I first heard these guys when they opened a Mr. Big concert in San Francisco in ’92 or ’93. I loved their show and it took me forever just to find the tape. If you like Journey, Survivor, etc., you’ll like this. “Stay With Me” is my fave track, but I love the whole album. I finally got it on CD and I highly recommend it.

5.0 out of 5 stars Perfect album!!!!,
I am an avid music collector, toured nationally in bands, and am extremely “forensic” about music. Most bands in history, regardless of music style, issue albums that include good or great songs, and then “filler songs” that just don’t cut it. Very rarely does a band release an album where EVERY song is great! Loverboy achieved that goal last year with there “Just Getting Started” CD. Tall Stories achieved that mission with their s/t release. Their first single titled “Wild on the Run” was very catchy and popular on the radio. They also released a second radio cut titled “Chains of Love” which is a fabulous song. So why did the band suddenly disappear? Allow me to solve the mystery. The same record label that released the Tall Stories s/t CD is the same label that was going to release the debut record from Peal Jam. The label had to decide which band to largely-promote. The label chose Pearl Jam and suddenly Tall Stories had no label support. This has happened to MANY bands. What a waste it was in THIS case because the Tall Stories record/tape/CD is full of gems. Buy it!!!!!!!!!!!!!!!!!

5.0 out of 5 stars Steve Augeri Back In 1990,
Steve Augeri a Journey vocalist since 1998 has amazing voice having both traits of Steve Perry and Jimi Jamison(Survivor). He is also known as the vocalist of legendary early 90s band TALL STORIES. I am really lucky that I could get that rare piece of gem!

Debut album of TALL STORIES sounds a bit like TWO FIRES debut a melodic rock classic by STORMs KEVIN CHALFANT. And the latter part sounds similar to HARDLINE. First four tracks really is classic early 80s JOURNEY sound. Particularly I love CRAWLING BACK which should have been their signature hit. Also I love the hard-edged guitar riff of CLOSE YOUR EYES. Guitar solo by Jack Morer in STAY WITH ME is just brilliant.

5.0 out of 5 stars Fabulous Lead Singing from Journeys current Frontman!!!,
I had the pleasure of listening to the self-titled release by Tall Stories. I was curious to see what Steve Augeri (lead vocals and current Journey Frontman) sounded like and boy, was I ever surprised…..pleasantly! The man has soul and can really belt out the tunes. For those of you that are Journey fans, this is a great addition to your collection. For those of you that are just fans of good rock, this is a must!!

5.0 out of 5 stars Nothing fictional here!,
An Extremely underrated cd. This is classic American rock with a New York edge. You will start to sing along after the first listen and not want to stop! This band would have been huge if the record companies would not have been shoving Nirvana and the Seattle/grunge sound down Everyones throats. For the money spent this cd is a bargain, all great songs with no filler. It could be re-released today and still sounds fresh. Take the chance and order Yourself a copy, You definitely won’t regret it! Tall Stories kick Ass!!!!

5.0 out of 5 stars GREAT!! If you wanna know why Journey chose Steve Augeri as a replacement, this CD will tell ya!! BUY IT!!