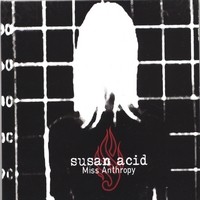 USAN ACID Miss Anthropy Alternative Industrial Metal act Susan Acid were formed out of the ashes of the critically acclaimed Italian underground act Hangin’ On A Thread. M and Joba relocated to London, and formed the dark, complex sound of Susan Acid and recruiting new members to develop the live show – in true Genin tradition, this is a mult-cultural, outward looking band of multiple influences and accompanying feistiness. The new live incarnation played its first shows at venues such as The Garage and The Mean Fiddler and was received so well that it was decided to put out the self-funded record on a national scale.
1 The Pincushion Queen
2 Humbledrome
3 Enter The Hero
4 The Toy Of God
5 The Failure
6 Erika&Omar
7 Influx
8 Homology
“