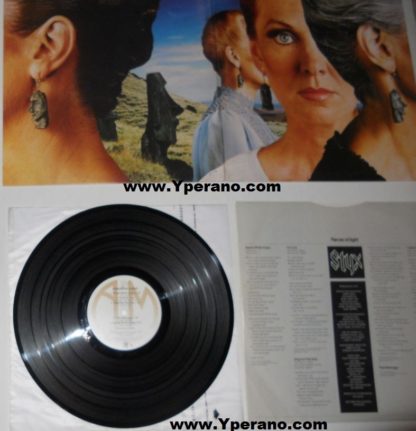 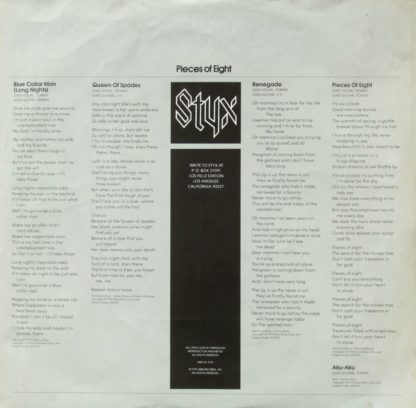 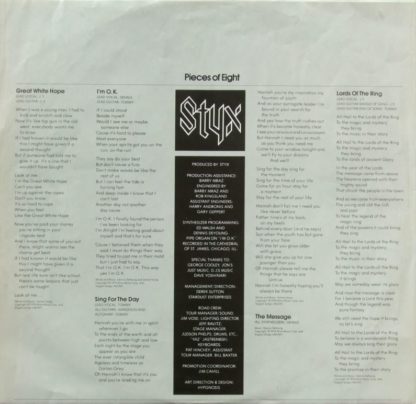 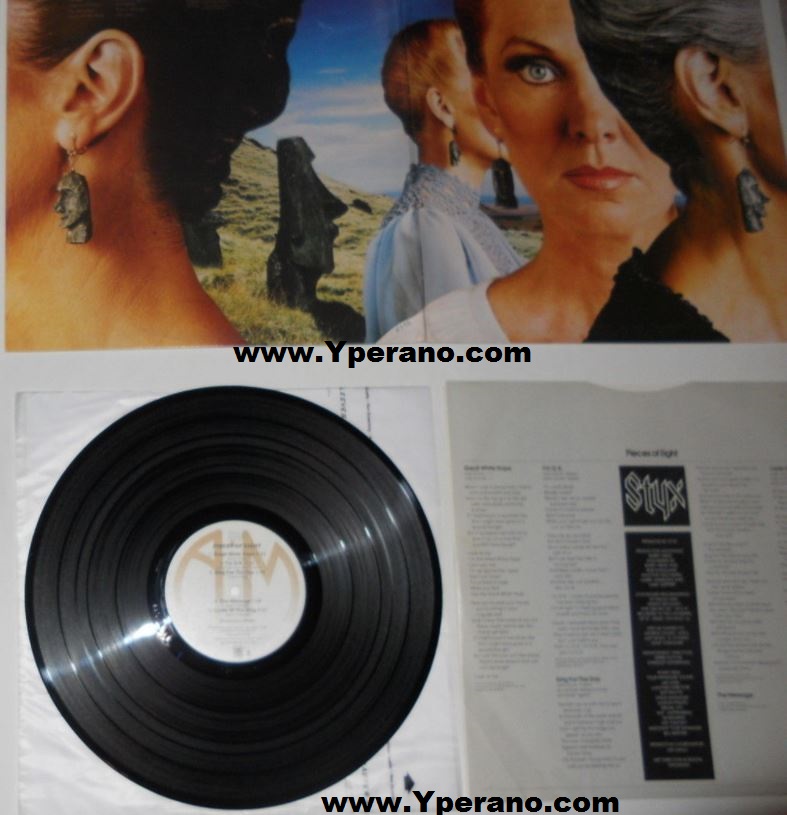 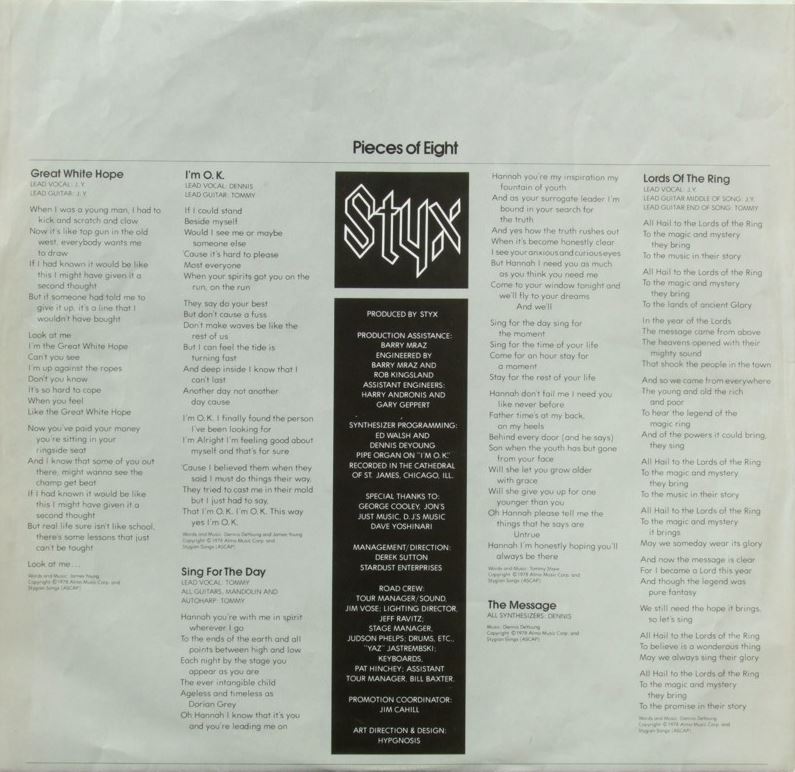 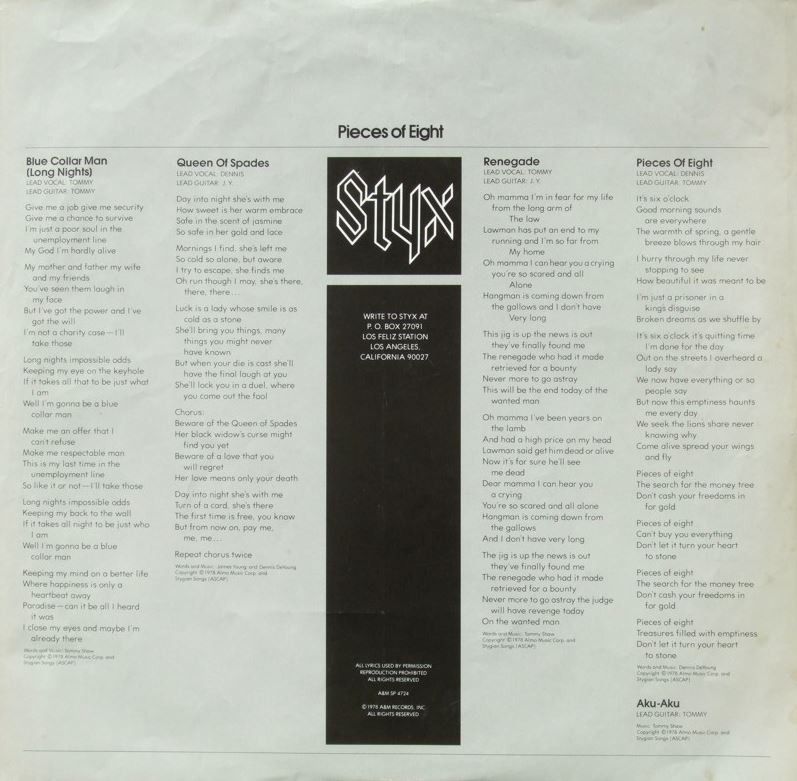 Pieces of Eight is the eighth studio album and second concept album by Styx,released September 1, 1978. The album was the bands follow-up to their Triple Platinum selling The Grand Illusion album. The band members produced the album and recorded it (like their previous three efforts) at Paragon Studios in Chicago with recording engineer Barry Mraz and mixing engineer Rob Kingsland. Im O.K was recorded at Paragon and St. James Cathedral, because of the pipe organ. This would be the last album to be produced at Paragon Studios.

The theme of the album, as Dennis DeYoung explained on In the Studio with Redbeard which devoted an entire episode to Pieces of Eight, was about not giving up your dreams just for the pursuit of money and material possessions.

Eight of the albums ten tracks have vocals, and it features two instrumentals, the DeYoung synthesizer showcase The Message and Tommy Shaws closing Aku-Aku (although for the latter, there was one lyric spoken, the title of the song).

The albums cover was done by Hipgnosis. DeYoung stated in the same 1991 interview with Redbeard on the In the Studio episode that he initially hated the cover but grew to like it as he got older.

The album peaked at #6 on the Billboard album chart, and like its predecessor would go Triple Platinum.
———————————————————-
Styx fulfilled a Midwestern American hunger for high-flown fantasy typified on Pieces of Eight with songs like Dennis DeYoung and James Young’s “I’m Okay” and “Lords of the Rings,” with their elaborate arrangements, soaring vocal harmonies, and lyrical pretensions. In quite another direction, guitarist Tommy Shaw writes about basic human needs and working-class values in “Blue Collar Man,” while his song “Sing for the Day” is a pleasant air, and “Renegade” a hard-charging rocker. Styx may have seemed somewhat schizophrenic on Pieces of Eight but their legions of fans diminished not a whit, making the album the bands second multi-platinum effort in a row.
——————————————————
5.0 out of 5 stars Styx’ Finest Work,
From a purely musical standpoint, “Pieces of Eight” is the more complete work and shows the talents of the band at their prime. It is a complete work, one that lends itself to listening to it in its entirety, almost as if the individual songs were intended as movements in a symphony.
The album begins with the fast, hard-driving “Great White Hope”. This song really gets your attention and gets the album going. This is contrasted with the slower, more majestic “I’m OK” which features a pipe organ solo performed by Dennis DeYoung recorded in a cathedral. If there is a weak link on the album, it is the third cut, “Sing for the Day”, a lighter tune in 6/8. While a nice, sparsely textured and upbeat follow up to “I’m OK”, it doesn’t seem to demonstrate the same level of compositional talent as the rest of the album. The tour de force of the album is “The Message/Lord of the Rings”. Here Styx continues its exploration of fantasy and storytelling, just as it had in earlier days with tracks such as “Jonas Psalter”, and “Castle Walls”. “The Message” demonstrates Dennis DeYoungs mastery of the synthesizer, both in technique and in creativity with timbres. “Lord of the Rings” is simply majestic and inspiring, and is probably the best example of all the voices within the band working together. If you aren’t motivated by listening to this cut, you must not be a Styx fan. Incidentally, this first side consists entirely of songs in major keys. Side one is clearly uplifting both in musical mood, texture, and in lyrics.

Side 2 takes us on a journey into the minor keys. “Blue Collar Man” may be Tommy Shaw’s finest work- one of those rare moments of inspired genius. Musically the song perfectly depicts the lyrical content of a desperate man fighting against all odds to make ends meet and the determination and will to get the job done. “Queen of Spades” is a minor-key soliloquy on the dangers of gambling addictions (or is it?). The vocal harmonies on this song (as throughout the album) really serve to bring home the message. “Renegade” is another song in a minor key and features blazing guitar work. I can remember being ten years old and hearing this song booming out of a chevy camaro going down the street- exciting! We end the album with the title track, which again starts out in a minor key as Dennis DeYoung recounts the events of a day with accoustic guitar accompaniment- we hear two stanzas of this, the second complimented with a bass countermelody, building anticipation. Psychologically, we’ve been in minor keys for an awfully long time, so when the chorus comes in in major, it is the perfect release of tension which has built up over eleven minutes. But they don’t end there! We are treated to a developmental section where a melody is played by Dennis on the Piano, and each other voice enters sucessively with accompanying material including another bass countermelody. Dennis really out-does himself at the conclusion of this section with a rapid virtuosic passage. A majestic guitar solo (JY I believe?) ushers us back to the chorus, which repeats in all its glory until a cadence which ends on a suspension, resolves, and then Dennis plays a cadenza which ends leaving just one lone synthesizer note- this leads into the “Coda” of the album, a hauntingly relaxing Shaw composition entitled “Aku Aku”. One is left with a feeling of completeness. “Pieces of Eight” is a true harmonic journey, THE masterwork of real musicians at the height of their compositional abilities.
———————————————————-
5.0 out of 5 stars Catchy, unflinching art rock,
Another great effort from one of rocks most underrated acts. Some may find the lyrics to a couple of the songs to be a little corny(I’m OK, Lords of the Ring), but the music is absolutely gorgeous throughout. One thing thats always puzzled me about Styx is how little notice Dennis DeYoung has gotten for his keyboard playing. I’m not a keyboard player, so I can’t really speak as to the difficulty of his parts; all I know is, his arrangements were beautiful and his solos rocked, and to be perfectly honest, I’ve never heard anyone who sounds anything like him. Some of you keyboardists out there are probably sneering and thinking “Keith Emerson”(of ELP); but I would say that while he may have been an amazing player and a great showman, most of his music is just flat out boring. Anyway, Dennis is in top form on this album. The synth solo on “Sing for the Day” is so joyous it practically brings tears to my eyes. Lest I forget, let me add that the guitars of Tommy Shaw and James Young are also great as usual. The bottom line is this: Pieces of Eight is one of the best albums by a unique band at the height of their powers. No one else has sounded like this before or since.
——————————————————–
5.0 out of 5 stars Buying a Styx album? Buy this one!
Styxs 1978 release of “Pieces Of Eight” is a masterpiece in the word of progressive pop/rock. Sure, nearly every Styx album has hits, but there are a select four or five that mix the glory of pop and progressive rock in such a way that it stands the test of time as a true album rock record, without any throw-away tracks. “Pieces Of Eight” presents Styx at their absolute best; constructing a tight album for progressive rockers and pop lovers alike.
People will remember this album for its radio hits the most – “Blue Collar Man” and “Renegade”. The hits are fantastic songs, but the album tracks are what makes this album such a gem. Songs like “Sing for the Day”, “Lords of the Ring” and the epic “Queen of Spades” are just as good if not better than the hits.
I own about 9 Styx albums, and I feel this is their most seminal work. If your looking for a second album to buy, I would recommend “The Grand Illusion”. I’ve seen them live twice; incredible both times; so I got to show love for Styx.

Pieces Of Eight  was  a hit record. Pieces Of Eight which once again featured Tommy Shaw (Guitar/Vocals), Dennis DeYoung (Vocals/Synths/Keys), Chuck Panozzo (Bass), and John Panozzzo (Drums) and it was the band’s eight studio album and arguably the band’s second concept album they had ever made. Just like The Grand Illusion, Pieces Of Eight also managed to sell over three million copies giving it triple platinum status. According to DeYoung, the album’s concept was about, “not giving up your dreams just for the pursuit of money and material possessions.” The album would peak at number six on the Billboard Top 200 charts and it produced one top 20 single with Renegade. Dennis DeYoung at first hated the album cover, but grew to love it eventually. The album cover was designed by Hipgnosis, a group that designed covers for the likes of 10CC, Led Zeppelin, UFO, AC/DC, Scorpions, and many more.

1. Great White Hope– The first track on the record that was written and sung by James Young. A blistering rock track whose intro sounds like it comes out of a boxing match, but none the less James Young is a rockin in a sound very similar to The Who in sound. 4/5

2. I’m O.K– The next track on the record that was written by both DeYoung and Young, but sung by DeYoung. I love the beginning of the track which starts off with a cool drum beat from Panozzo before the synths come in along with the guitars. I love Tommy Shaw’s playing on this track and the solo is cool as well. 4/5

3. Sing For The Day– The second single off the record and a truly an amazing song to hear live. The beginning of the song starts off sounding like a medieval carnival song, but a great sing along track. Tommy Shaw uses the name Hannah in the song to represent his fans. 5/5

4. The Message– A synth heavy instrumental track. The track is essentially a prelude to Lords of the Ring.

5. Lords of the Ring– a track sung by James Young about what I believe is the Lord Of The Rings book. I never thought I would say this, but I enjoyed DeYoungs synth solo. 4/5

6. Blue Collar Man (Long Nights)– according to wikipedia, the track is in, “The song is in D natural minor, with moments of D harmonic minor due to the use of the V chord, A major.” This was the first single off the album that was sung and the lead guitar played by Tommy Shaw. One of my favorite live tracks to hear from the band. 5/5

7. Queen of Spades– One person made a great observation about this track and it’s possible meaning. Int he lyrics they mention Black Widow, Lady Luck, and guys and dolls which in poker Queen Of Spades represents an unlucky card in the game of hearts. So, what does this say about women and the track. It’s a rocking track anyways. 4/5

8. Renegade– My all time favorite Styx song and a story of a an outlaw whose getting hung from his perspective. The harmonies on this track are flawless and give me goosebumps every time I hear it. 5/5

9. Pieces Of Eight– The title track starts with a nice piano piece from DeYoung and it’s mostly a ballad from the band. Once again another track where I love Tommy Shaw’s guitar playing on the song. 4/5

10. Aku-Aku– An instrumental track that is the postlude for the album. 4/5 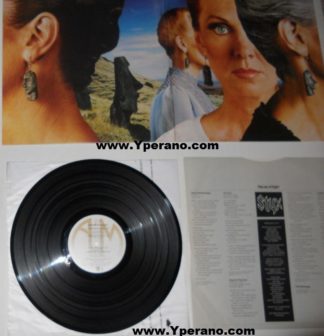