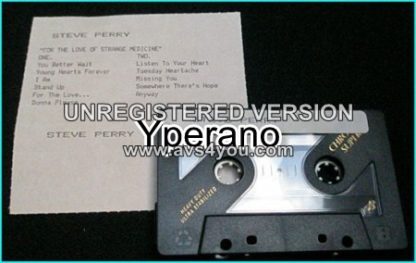 Divinely perfect. Steve, you are amazing! 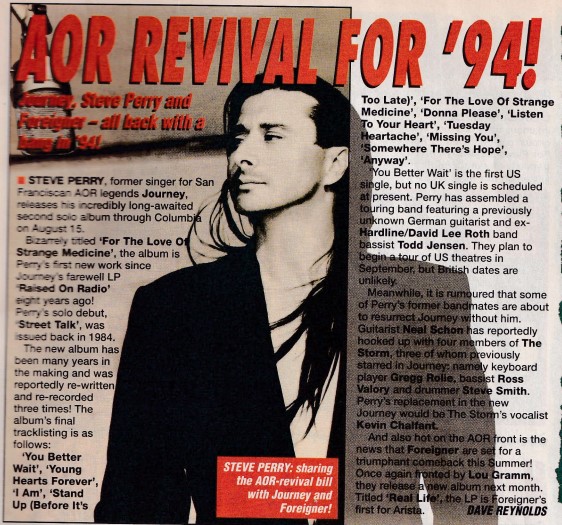 Is it me, or did Steve Perry seem like he felt more free to let his vocal range loose on his solo? projects? In Journey Steve was just unbelievably gifted, but on solo projects he soars even above gifted to being a vocal phenomena.
For the Love of Strange Medicine is the second solo album by Steve Perry released in 1994. After a lengthy 8-year hiatus following the breakup of Journey, and a shelved solo effort later titled Against the Wall, Perry returned to the spotlight with this album. The first single “”You Better Wait”” received major radio airplay and made the top 30 on the Billboard charts in the U.S.

Between his smash hits with Journey and his Street Talk solo record, Steve Perry spent much of the ’80s dominating radio’s rock and Top 40 formats, not to mention MTV. So when he lapsed into a prolonged hiatus following Journey’s breakup after 1986’s Raised on Radio LP, it came as something of a surprise. As the ’80s wore on into the ’90s, Perry went from arena-filling rock star to rarely seen recluse. But even if he was working at a slower pace than fans may have liked, Perry hadn’t walked away from music, and he proved it with the July 19, 1994, release of his second solo effort, For the Love of Strange Medicine.

The record’s long-awaited arrival came only after a lengthy period in which Perry completed, then scrapped, an album’s worth of material — some of which would only surface with the release of the Greatest Hits + Five Unreleased compilation in 1998. “I wrote 13 songs,” he explained in a 1991 interview. “Then I started the ‘record thing,’ you know, tracking, overdubs, vocals, mixing, etc. During this time, my life began to change and when I finished, I realized that some of the things I feel today were not reflected in the total picture as I looked back at the project. So … here I am on another wave of creativity.”

“I can only continue to work on the record like a painting,” he added in a separate interview. “When it’s done you pull back and say, ‘I’m dropping the brush. I don’t want to put any more paint on this.’ That’s the balance, to know when to stop. I understand that, but at the same time I’m really enjoying the making of this record and when you do something you enjoy doing, it’s kind of hard to stop.”

The sessions found Perry working with a new band whose ranks included keyboardist Paul Taylor, late of Winger. “He’s a very creative guy. He comes up with some of the most beautiful chord changes I’ve heard in a long time,” Perry said in a 1993 interview with the Journey Force newsletter. “We call him ‘bridges while you wait’ because he can come up with a bridge just like that. I’ll go, ‘We need something right here. Don’t think, just play it’ and he’ll do something great. It’s been fantastic writing with him.”

Lincoln Brewster, Perry’s guitarist for the album, was plucked from obscurity through his association with Perry’s friend and former bassist Randy Jackson. “There were so many people in this town that could play a lot of chops but they really had no feel. The more I looked, the more disappointing it felt. There wasn’t a whole lot of heart in their playing,” Perry recalled. “Randy called and said he was given this tape a kid had made in his home studio. The songs were unfinished, but they stood on their own; they were so pretty. I was standing here in this room listening to the tape and I could feel that there was something behind his playing. There was soul there. I called him and we talked for a long time. He was living at home with his mom at the time.”

Perry found his new drummer, Moyes Lucas, Jr., through similarly fortuitous circumstances. “Paul, Link and I were at a rehearsal place here in Los Angeles and we were just jamming and having a lot of fun. We were thinking we might put something together, but nothing was for sure. We were going through some drummers trying to find someone who would click with us. We went through quite a few drummers, but no one was right,” he explained. “One day we were jamming and trying people out when this guy, Moyes, knocks on the door and says he would like to audition. I looked over at the drummer that was playing at the moment and I realized that if I cut him a little short and then pushed the next guy back a little bit, we could work Moyes in. He came in and set up and we could tell from watching him tune up his kit that he was different. We knew right away. We started jamming and writing a song.”

“It was very collaborative,” he later reflected of the songwriting process. “There were so many songs on the record that were written in a group rehearsal situation, because that was the best place to test drive them — like a fast car.”

Even if it bore the stamp of outside influences, the heart of the album was very much Perry’s. “The lyrics on this record are all about truthful experiences — things that are going on in my life,” he insisted. “Each song is different. Paul, Link, Moyes and I did most of the writing. Sometimes Paul and I will start with a lyric and Link would come in and add something. Sometimes Lincoln and Paul would do the chord changes and the melody and then I will come in and start singing over it. I wrote some of the lyrics by myself, and one with [’70s soft rock hitmaker] Stephen Bishop.”

After so long between albums, and so much time spent with the material, Perry was understandably reluctant to put a bow on the album and let it out in the wild. “Each song’s like a child to me. They become my kids it’s so hard to let them go,” he admitted. “Once I’m done, they’re grown up. They’re gonna fall down; they’re gonna make mistakes out there, some people are gonna love ’em and some are gonna hate ’em. It’s out of my hands. Out of my hands.”

Ultimately, the overall reaction to For the Love of Strange Medicine ended up being somewhere between those two extremes. Although the single You Better Wait broke the Top 40 and the album was certified gold for sales of over half a million copies, it wasn’t anywhere near the level of chart-topping, multi-platinum success he’d enjoyed during the previous decade, and its release did little to quell the constant question of a Journey reunion.

Those thoughts were only furthered by the record’s pensive closing track, “Anyway,” a song Perry admitted was inspired by the band’s demise, particularly “my participation in some of the things we did to each other as people.” Saying it was “difficult to write,” he continued, “It was also difficult to put on the record, but I included it for no other reason than me wanting to say how things were from my side of the street […] I felt this song was something I needed to say […] I’m not pointing a finger anywhere except at me. If someone else wants to talk about their side of things, they’ll do that when it’s their time.”

One presumes there was plenty of talking about the various sides of the Journey breakup when the band reconvened for 1996’s Trial by Fire LP, but in the meantime, Perry remained focused on his solo career — and grateful for the fact that an audience was still willing to listen. As he put it in the promotional making-of video for Strange Medicine, “I’m just fortunate to be able to sing and express myself in a way that other people like to hear.”

5.0 out of 5 stars What a Voice!,
Great album, if you love Journey, Soft Rock and great vocalists like Rod Stewart, Michael Bolton… then you will love this album. My favourite track is the beautiful “”Somewhere There Hope””. A Great mix of ballads and rockers, Go Steve!

5.0 out of 5 stars What a voice!
For those of you who love Steve Perry’s voice, you will love this album. The former Journey frontman is at his melodic best here. Stand out track, for me, is “I Am” which could easily have fitted onto the end of the last Journey album Steve Perry sang on, “Trail By Fire”. Try this, it’s worth it!

5.0 out of 5 stars
This is a brilliant album and I absolutely love it – but I didn’t expect any less than that from Steve Perry. I actually prefer his solo work to that of his work with Journey – his voice is richer, more mature and soulful in my opinion – (I also love listening to the Steve Perry era of Journey but his solo stuff is my preference). If you are a fan of his, this should be in your collection if you don’t have it already. I really hope he blesses us with more some day in the not-too-distant future.

5.0 out of 5 stars Five Stars
Good delivery what can you say about one of the greatest rock singers of all time

5.0 out of 5 stars What a Voice!
Great album, if you love Journey, Soft Rock and great vocalists like Rod Stewart, Michael Bolton… then you will love this album. Brilliantly re-mastered with bonus tracks. My favourite track is the beautiful “Somewhere There’s Hope”. A Great mix of ballads and rockers, Go Steve!
Everything I expected this Steve Perry album to be! Pure gold! I’m a big fan.

5.0 out of 5 stars What a Voice!
Great album, if you love Journey, AOR, Great vocalists like Rod Stewart, Michael Bolton… then you will love this album. A Great mix of ballads and rockers, Go Steve!
There are no words to describe the majesty of Steve Perry. If by some bizarre quirk you have never heard of him then I am jelaous of what you are about to discover. The world’s finest singer bar none.

'Oh Sherrie' Quarantine Qover Tribute to Steve Perry He is the Man!!🎤 For all you audiophiles out there, what you are… 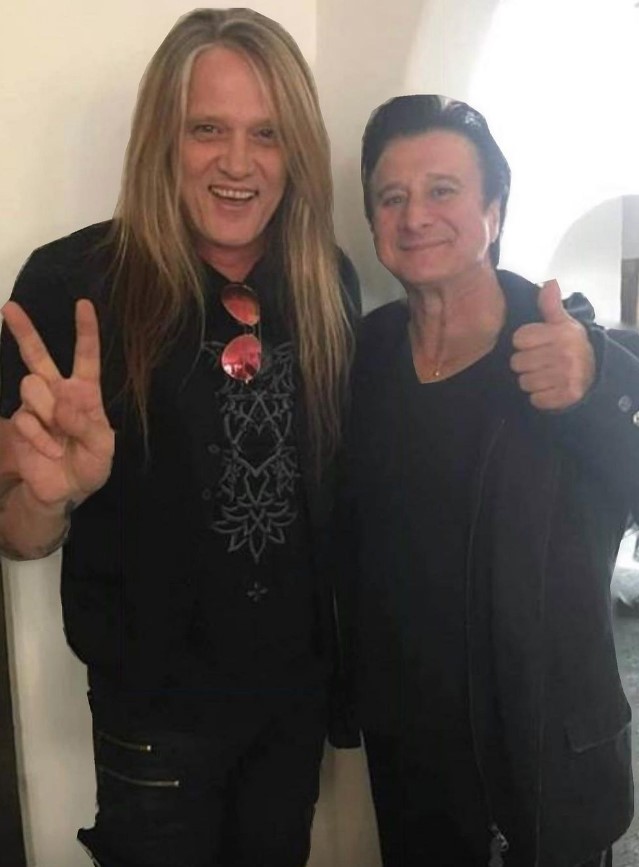 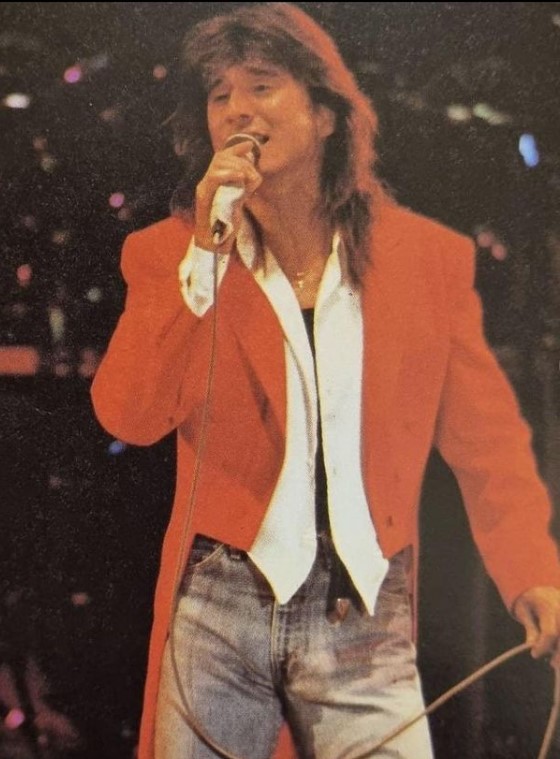