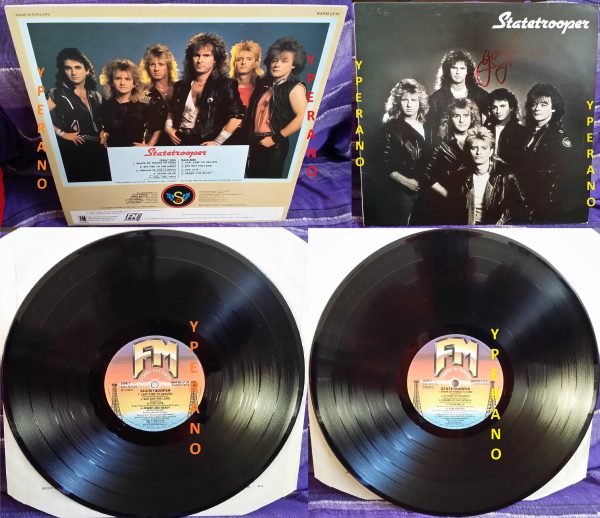 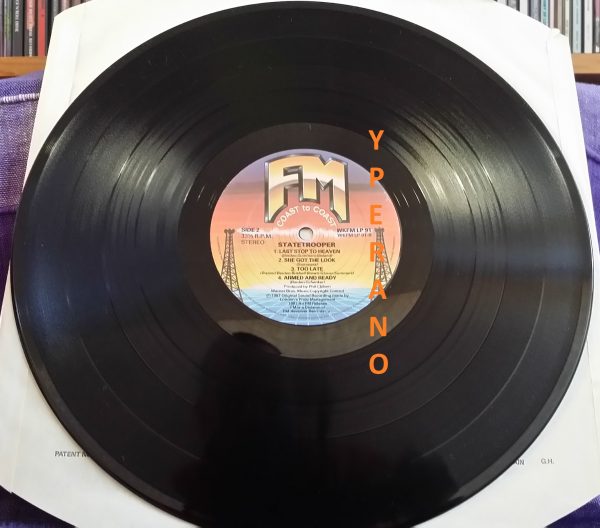 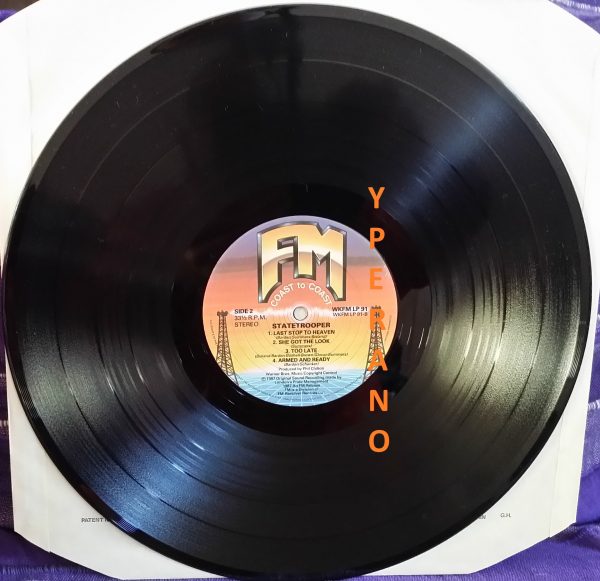 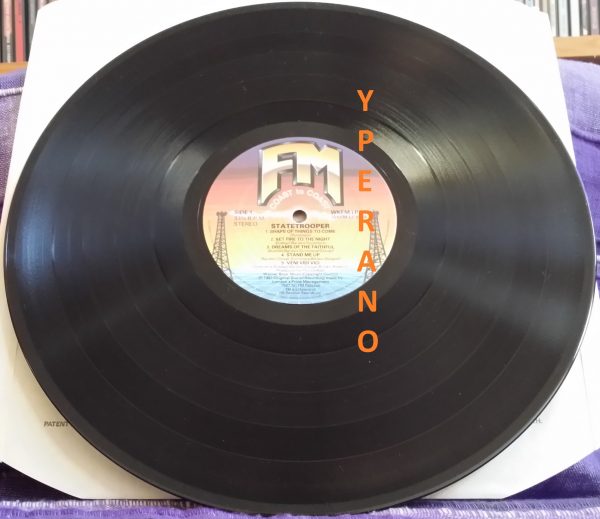 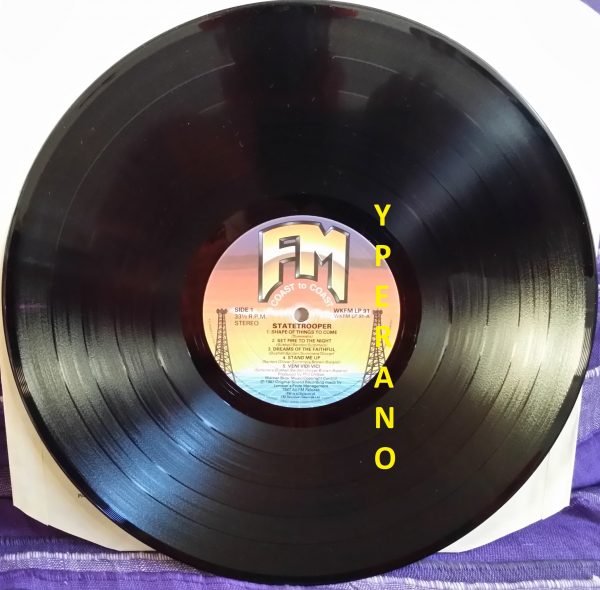 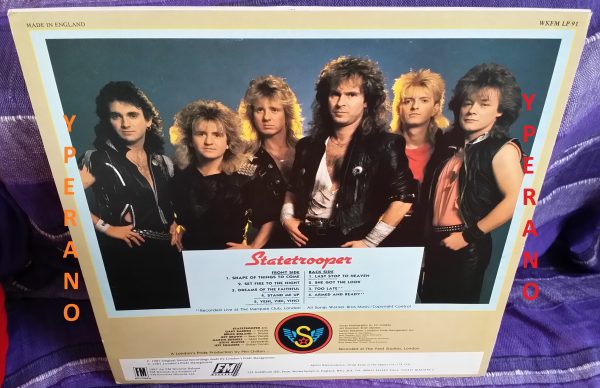 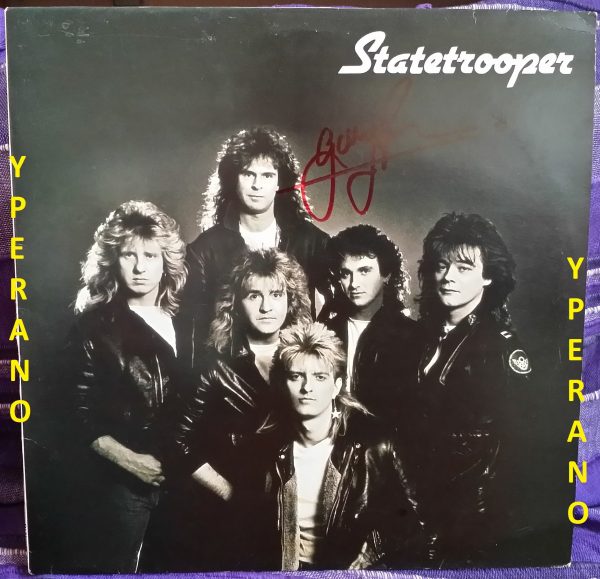 Statetrooper first put pedal to the metal in the summer of 1985. The new outfit was originally envisioned as the solo venture for the legendary Gary Barden following his departure from highly-successful Michael Schenker Group. Having left MSG at the top of its game and after a short-lived, yet spectacular, history with that band, Barden emerged from a six-month hiatus with the brothers Steve and Paul Johnson in tow to lay the foundations for a new band, namely Statetrooper.

This line-up would lay down several tracks at various sessions. In particular, the songs Hot Daze and For Good Or Bad would affirm Barden spectacular voice and presence. In spite of this early accomplishment, Steve and Paul soon departed and Statetrooper would instead see the addition of the highly-regarded and dynamic drummer Bruce Bisland. Fans recognized him from NWOBHM stalwarts Weapon and Mausoleum recording artists Wildfire. Being impressed by the manifest talents of Bisland, Barden would soon take advantage of the opportunity and recruit the former Wildfire colleagues: guitarists Martin Bushell and Jeff Summers, bassist Jeff Brown as well as earlier-discovered keyboardist Steve Glover. This line-up would become the squad known as Statetrooper. They released a 12″” EP entitled She Got The Look and another called Set Fire To The Night in 1986. The London-based Pride Management took over the band business affairs.

The seminal and self-titled Statetrooper album was unleashed in 1987. It was recorded at producer Phil Chiltern The Yard recording studio during several intermittent sessions. The tracks were originally meant to be high quality demos highlighting the talents of the band in order to garner major label interest. Yet, as cruel fate would have it, the prevailing musical trend had translated into a lethargy for genuine rock music by the major record labels. Furthermore, the potential investment required to expose Statetrooper to the world coincided with the inept management to insure that the album was released only in limited fashion, as a distribution-only product by FM Records. The limited nature of the release coupled with the bombastic quality of the album would guarantee a treasured status for the album for years to come.

Armed with outstanding songs like the hook-laden Shape Of Things To Come, the hard-driving and catchy Veni Vidi Vinci and even a live version of MSG Armed And Ready Statetrooper album had generated very favourable reviews from some of the most influential music commentators of the time. One journalist had claimed that Statetrooper were “”the saviours of British Rock Music.”” Comments like this would be borne out by the passage of time. With the album release in full swing and sales figures climbing Statetrooper was soon invited onto the road as very special guests to the legendary Blue Oyster Cult in 1986. Fans were not surprised when, despite opening for a very successful and renowned act, Statetrooper managed to steal the show at many of the large and sold-out venues across the United Kingdom. The immediate effect of the tour was the word of mouth which had travelled faster than the band. Rock, hard rock and heavy metal fans would turn up at the shows clutching the recently-released album demanding autographs and more information about the band. Journalists had caught the buzz as well and consequently Barden and the boys were invited to many print, radio and TV interviews. It was therefore astonishing that despite all this interest and the numerous appearances around Europe (including several sold-out shows at the original and now defunct Marquee Club on London Wardour Street), the day musical climate had conspired to hinder Statetrooper from ascending to the next level. This, even though by 1987, original lead guitarist Martin Bushell had been replaced by former Wild Horses, Thin Lizzy and Motorhead guitar hero Brian Robertson.

The new line-up successfully conquered several festivals on the European continent and continued to pen newer songs. In the summer of 1987 Statetrooper demoed gems like, Juliet and How Does It Feel at London Trident Studio. Sadly, the songs would remain unreleased for not only Statetrooper would fire its management, but more importantly Barden would decide against resisting the unfavourable tides of trendiness. With typical dignity he called for the ‘trooper to hang its hat for the time being.

Statetrooper was gone, but never forgotten. Despite the limited time that the band had shared together and with its fan base, interest in Statetrooper was still phenomenally strong. Case in point, fans had turned the original Statetrooper LP a rare and sought-after masterpiece and even besieged Barden personal web site the moment it had kicked off its door to his devout fans. Barden had returned at the tail end of the century to amaze all by a new musical project called Silver which so far has released three albums.. And oh, there were the independent web sites springing up in several countries in order to demand the re-release of the band sole album

The line-up was Gary Barden on vocals, Jeff Summers on guitars, Jeff Brown on bass and Bruce Bisland on drums. As Summers would explain, “”All four of us have a great sense of spirituality about Statetrooper. We love the band!”” Funny, the fans might have said, for they felt exactly the same way!
———————————————————-
Signed, Autographed

You are right, that is a? fantastically constructed and played solo!!!the solo from 2:25 is world class, esp the part from 2:55

5.0 out of 5 stars 80 Classic,
The kicks off with the great “”Shape Of Things To Come””, a driving 80s rock tune with a big chorus, melodic harmony guitars and loads of fluffy keyboards. 80s rock didn’t get much better than this. The up-tenpo rocker “”Set Fire To The Night”” oozes of party atmosphere with great guitar riffing over a steady foot stomping beat and a Barden in great form howling out another huge catchy chorus. The same vibe can be found on “”Last Stop To Heaven”” another up-tempo party rocker. “”She Got The Look”” is pure pop heaven with great keyboard work.

5.0 out of 5 stars Statetrooper is on fire!!,
I was able to listen to some samples of this and couldn’t wait to get it. Gary Barden has a very powerful voice. Jeff Brown and Bruce Bisland play a strong and tight rhythm section. I really love this. It too bad that Statetrooper weren’t given what they deserved. I would recommend this to anyone who likes Michael Schenker, Scorpions,etc.

5.0 out of 5 stars I agree with them,
I have to agree with the others on this…This is infectious, the songs and the band performance are Hard melodic rock masters and I would suggest that anyone who enjoys listening to the likes of Van Halen (at there very best) Thin Lizzy, Deep Purple et al, will enjoy this investment very much!! As a side note, this CD features the excellent vocals of Gary Barden (ex MSG) I am a big fan of MSG and Gary voice has never sounded better than on this!

5.0 out of 5 stars Fantastic,
That was my generation. That was my music. But, I never heard of these guys. I stumbled onto this by accident. Being that melody is my game this band Rocks. They have got lots of power but the melodies are to die for. Every solo is packed with a fantastic array of tricks and technique which every headbanger longed for at that time. I still do; long for new music from my generation. I would buy every album these guys put out. Hats off!!!”