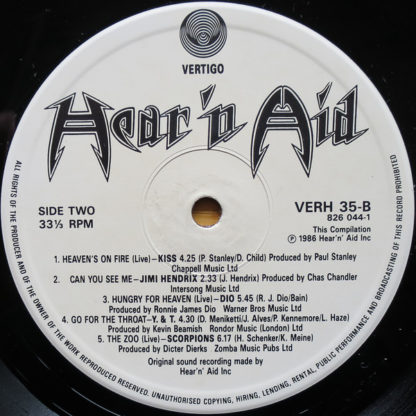 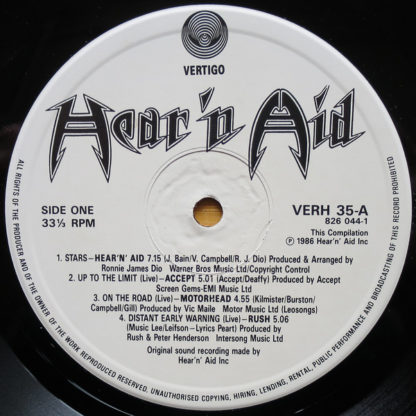 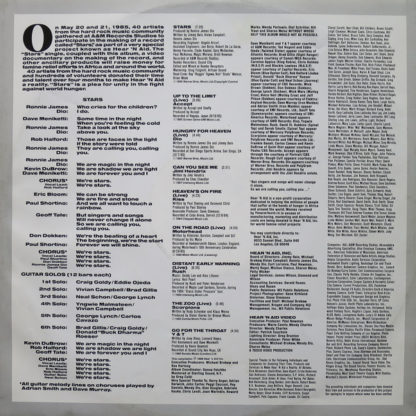 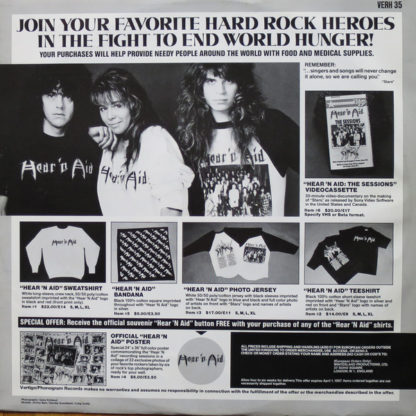 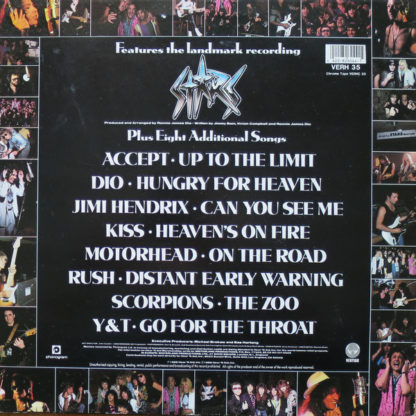 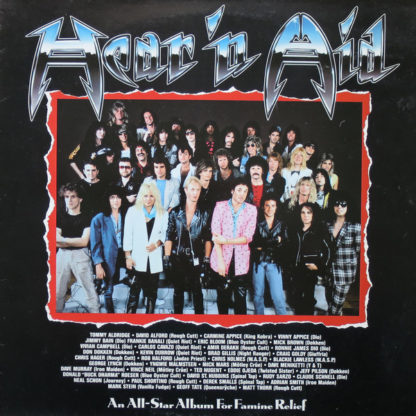 Hear ‘n Aid was a one-off project of the hard rock/heavy metal scene of the 1980s to raise money for famine relief in Africa. According to Ronnie James Dio MySpace profile, the project raised $1 million within a year.

While attending a 48 hour charity Radiothon at the radio station KLOS, Dio members Jimmy Bain and Vivian Campbell noticed that representation from hard rock or heavy metal stars was low. In light of the success of Band Aid “”Do They Know It Christmas?”” and USA for Africa “”We Are the World””, they forwarded an idea to Ronnie James Dio, also attending the Radiothon, and together decided to create a similar project exclusively built around artists from the hard rock/heavy metal scene. Together the three co-wrote the song “”Stars.””
The song was recorded on May 20 and 21 1985 at the A&M Records Studio in Hollywood, California. The project included contributions from Ted Nugent, Yngwie Malmsteen, Tommy Aldridge and members of Dio, Judas Priest, Iron Maiden, Quiet Riot, Dokken, Motley Crue, Twisted Sister, Queensryche, Blue oyster Cult, Vanilla Fudge, Y&T, Rough Cutt, Giuffria, Journey, W.A.S.P. and Night Ranger as well as the parody band Spinal Tap. Lead vocals were shared between Ronnie James Dio, Rob Halford, Kevin DuBrow, Eric Bloom, Geoff Tate, Dave Meniketti, Don Dokken and Paul Shortino. Vivian Campbell, Carlos Cavazo, Buck Dharma, Brad Gillis, Craig Goldy, George Lynch, Yngwie Malmsteen, Eddie Ojeda and Neal Schon all added guitar solos. Iron Maiden Dave Murray and Adrian Smith were in the middle of their ‘World Slavery Tour’ at the time and flew in to attend the main session. A documentary was shot of the recording process and released simultaneously.
The project also released a compilation album headed by “”Stars””, and also including live tracks by Kiss, Motorhead, Dio, Accept, Rush and Scorpions, as well as studio recordings by Y&T and Jimi Hendrix.
Dio had originally intended the song and album to be released shortly after its recording, but contractual issues with the different artists’ record labels delayed the release until January 1, 1986, somewhat diminishing the impact of its release.

Notes
On May 20 and 21, 1985, 40 artists from the hard rock music community gathered at A&M Records Studios to participate in the making of a record called “”Stars”” as part of a very special project known as Hear’N Aid. The “”Stars”” single, coupled with the album, a video documentary on the making of the record, and other ancillary products will raise money for famine relief efforts in Africa and around the world.
40 artists and hundreds of volunteers donated their time and talent over four months to make Hear’N Aid a reality. “”Stars”” is a plea for unity in the fight against world hunger.
Recorded at: A&M Records Studios, Rumbo Recorders, Sound City.
Edited and mixed at: Rumbo Recorders
Mastering: Artisan Sound
Interviews recorded live at A&M, May 20 1985.
Edited and mixed at KLOS Sound City.
Special Thanks to Tim Kelly.