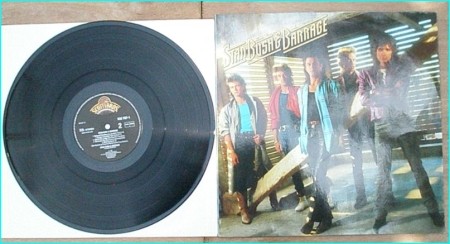 Stan Bush started his career in 1979 with the band Boulder. Later he scored a solo deal with Columbia Records, and released his self-titled debut in 1983. Then Bush put together a backing band; Barrage. Their self-titled debut was released in 1987.
The album opens with a pulsing keyboard riff on “”Temptation.”” As the song moves forward you can picture yourself riding along with Crocket and Tubbs on Miami Beach. Next, the band throws in the obligatory ballad, “”Love Don’t Lie.”” It could easily be the love theme to any of your favorite eighties movies. Speaking of eighties movies, Stan Bush & Barrage have two songs on this album that appeared in films. “”The Touch”” is the most notable, having appeared first in The Transformers Movie, and most recently in Boogie Nights (being butchered by Dirk Diggler). Come on, you know the song – â€œYou got the touch / you got the power.â€ A lot of people think Sammy Hagar did that song. The other song, “”Heart vs. Head,”” appeared in the Charlie Sheen race car flick, The Wraith (the cheese factor of that movie is off the chart, a must see!)

The album is about as good as melodic rock gets. The riffs are just excellent on “”Primitive Love”” and “”Crank That Radio.”” They’re not too heavy, but strong enough to have you strumming your air guitar. The song structure is your typical verse / chorus / solo / verse, the choruses are catchy and Bush has an excellent melodic, often raspy voice throughout the album. The guitar solos are just as precise as any metal guitar hero. This is evident on “”Do You Remember.”” Stan Bush isn’t trying to get any deep meaning across on this album. He sings of the typical eighties rock staples: music, love, girls, and heartbreak. Sadly, Stan follow-up releases were not as well-received as this one. Stan was unfairly classified as AOR (Adult Oriented Rock). Of course, every kid in America was listening to stuff like this, go figure!

The Verdict
He not the flashiest guy, and doesnât have the coolest rock and roll name, but Stan Bush can sing his ass off! Not to mention shred on the guitar. Stan Bush and Barrage is a melodic rock classic.
Rating: 5 out of 5 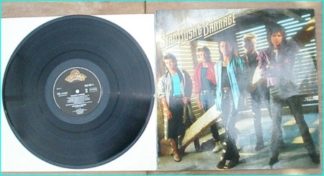