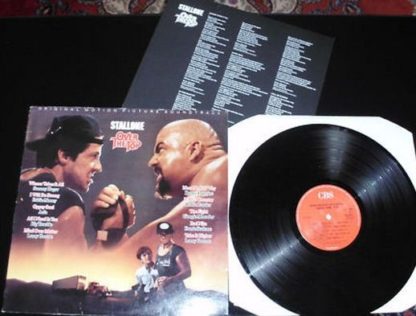 STALLONE OVER THE TOP – ORIGINAL SOUNTRACK LP 1987. Check the “Winner Takes It All” Sylvester Stallone vs. Sammy Hagar video.

Genius! Overlooked soundtrack.The music is perfect to use with work-outs. Sylvester Stallone is a trucker who fights to have his child’s custody and arm wrestles for money! The absolute best 80s music is orchestrated in this beautifully made motion picture artefact!
Next to “Rocky” this music “will take you HIGHER”!!!
The nice thing is, the soundtrack comes with an insert that HAS the lyrics to every song, except “The Fight”, which is the only instrumental song on the LP. “Winner Takes It All”, is a great song. So too are the songs “Take It Higher” (very cool), “Bad Nite” and “Meet Me Halfway”, by Kenny Loggins. This soundtrack has some very inspiring songs to me.
Released in 1987 it contains music from Frank Stallone, Kenny Loggins (who performs the films central theme, “Meet Me Half Way”), Eddie Money, and Sammy Hagar. John Wetton, lead singer of the rock group Asia, sang “Winner Takes It All” for the movie, but after performing the song, it was felt that his voice wasn’t “mean” enough, so the song was offered to Sammy Hagar, whose version, featuring a bass guitar solo from Hagars then-bandmate Edward Van Halen, ended up being the one on the soundtrack.

Back in the old 80s days we had movies about winning obstacles and having infinity bounds with friends or family. So all the songs were motivational to feed the power of the stories.

SIDE 1:
WINNER TAKES ALL – SAMMY HAGAR  Beautiful and energetic song. It recharge my heart and soul. Stallone is an innovative man in the film industry. Without a doubt.
IN THIS COUNTRY – ROBIN ZANDER [Cheep Trick]
TAKE IT HIGHER – LARRY GREENE
ALL I NEED IS YOU – BIG TROUBLE
BAD NITE – FRANK STALLONE
SIDE 2:
MEET ME HALF WAY – KENNY LOGGINS
GYPSY FOOL – ASIA
THE FIGHT (INSTRUMENTAL) – GIORGIO MORODER
MIND OVER MATTER – LARRY GREENE
I WILL BE STRONG – EDDIE MONEY
CBS

5.0 out of 5 stars Over the Top is the best
Over the top is such an emotionally moving film. The music that runs throughout the entire movie just adds to the effect.

Be the first to review “STALLONE OVER THE TOP – ORIGINAL SOUNTRACK LP 1987. Check the “Winner Takes It All” Sylvester Stallone vs. Sammy Hagar video.” Cancel reply