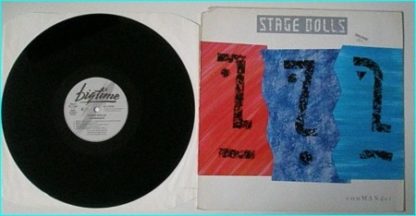 Summarise Stage Dolls, in a sentence? Well think Bryan Adams if he was Norwegian; any mention of Stage Dolls is followed by Bryan Adams, and that they are from Trondheim.

The Big Time Records edition of the album was remixed by Eddie DeLena and is well worth tracking down if you’re a fan of “Commandos”. It’s slightly more ambient sounding and Torstein Flakne’s vocals come across like they have more room around them in the mix.  The original mix is the one you’ll find on CD these days – the one with the drawing of the band on the front. The US edition only exists on vinyl, although a certain German online store embarrassed itself utterly and completely by carrying bad quality bootleg copies of the US version some years back, and were rightly reprimanded by the band management within days.

The Songs
Here with their second album. They employ a more laid back approach to their work; some might call it shirking possibly? No that would be harsh, more of a thinking man’s attitude, a coolness. But the output is first class, and write some super AOR hooks, take the opening ‘Heart To Heart’, this is an excellent example of the absolute in AOR finery, epic even, while the chorus in ‘Commandos’ comes across like Honeymoon Suite, on their wedding night. ‘Young Hearts’ is another pulsing AOR flag waving success. ‘Rock You’ is a real change, more plugged in, hair backcombed, traces of Def Leppard and a definite twirl of the silk scarves of Aerosmith, adopting a swagger of many a US hair band. ‘Magic’ begins much more low key, back to that ‘electronic’ drum beat, a mild criticism? Yes possibly, but overall quality with Cutting Crew and Wang Chung influences, adds enough good points to bring it way above the threshold. More stabbing with those AOR ‘steely’ knives is ‘Who’s Lonely Now’. Wasn’t it the Vikings that first got to the Americas? Well anyway, Stage Dolls always seemed to be obsessed with the all-conquering USA, and with the track ‘America’, they are probably touring the minor roads rather than highways. Nevertheless a catchy tune, pop even, but really a trademark that Stage Dolls still could be translated as going nowhere, as it’s so remarkable safe. ‘Don’t Look Back’ brings up the rear; it does try to encompass the more AOR moments of John Cougar Mellencamp and rockier moments of John Kilzer.

In Summary
It was on their next release, simply called ‘Stage Dolls’ that the group quickly became the darlings of the British music press, especially with Kerrang and Raw, and even managed to secure a highly lucrative support slot with Mr Big, who at the time were riding high on the success of ‘To Be With You’. At times this has some great AOR moments, like ‘Heart To Heart’ and ‘Commandos. I can understand the group looking to those mid-western skies for influence and wishing to have been born in the US and the majority of the time they successfully achieve this, it’s perfect AOR.

Commandos is the second studio album by Norwegian hard rock band Stage Dolls. Like the first album it was recorded at Nidaros Studios in Trondheim, Norway using the same producer, Bjorn Nessje, and engineer, Rune Nordahl. Commandos has a more mature sound and it charted for 11 weeks, peaking at no.8 on the Norwegian album charts. Making the band one of the most popular rockbands in Norway in 1986. The band also started to get attention outside of Norway and ‘Commandos’ was released in the US by BigTime Records. The title track gained considerable airplay on college-radio in the US.

This is a really great. I love it! Hard Rock but with an almost poppy feel or should i say it vice versa…anyway a pleasant one and that what is the important thing…tracks???…i’d go for these ones ‘Heart To Heart’,’Commandos'(catchy),’Young Hearts'(catchy)& ‘Don’t Look Back’ 86/100″

Utterly great band!! Period.. Great band and great album! I simply love this record still today! For me, a classic from the golden age!

great band and great album, this band is like a long lost Bryan Adams brainchild – and then some!…

While I expect many Stage Dolls fans would point to the self-titled album from 1989 as the band’s finest hour, “Commandos” is my personal favourite. I recall that there was a definitive buzz surrounding the band at the time, and I imagine that the fans who had hung around since “Soldier’s Gun” will have been fairly surprised at the quantum leap in the professionalism of the band and the product they delivered with their second album. Opener “Heart to Heart” was a real shot in the arm when I first heard it (it might even be the ultimate Stage Dolls tune, as far as I’m concerned!), and the that monster riff kicking in after Flakne’s “Stop it!” cry may well be the essence of my teenage years captured in a brief couple of seconds!