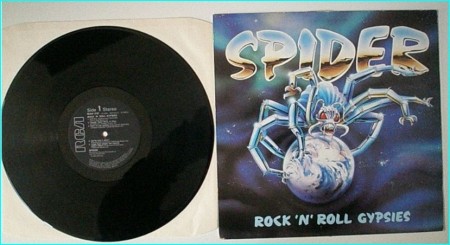 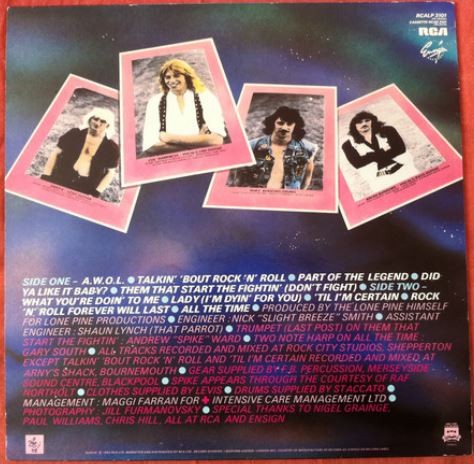 all songs in 5 minutes.

Spider actually had a decent career compared to most of their compadres of the NWOBHM era. They released several singles and two full length albums. The low-down on this band is that they were totally a Rock N Roll party band. However, their music is very cool. Pouncing with rhythm and very easy to remember tunes which sort of captured the vibrant and fun NWOBHM scene. Not that Spider had any kind of super grasp on ability or music theory, but they, like most Metal bands, strived for some level of technical proficiency.

5.0 out of 5 stars A real boogie fest….,
I got this album when it was first released and loved it
I saw the band both as headliners and as support (to Gillan) and they were always rockin’ and always superb. Rock ‘N’Roll Gypsies is a real boogie fest from start to finish, produced by the great Tony Wilson (Friday Rock Show producer – for whom Spider recorded a few jingles). In fact the band were managed by Maggi Farran who was of course Mrs Wilson (Tony wife).
Although they were always labelled as Status Quo clones this was way off the mark. Sure they were influenced by the mighty Quo, but they were also influenced by a host of others too – Slade for example (anyone who saw Spider live will attest to this), they even used to cover Get Down And Get With on stage. The problem Spider had wasn’t the Quo comparisons it was their own image – they seemed to be content to be a club band rather than push forward to bigger and better things.
Be that as it may Rock ‘N’ Roll Gypsies is a corker of an album which sounds as energetic and fresh now as it did all those years ago. If you’re a fan of BOOGIE what are you waiting for???

5.0 out of 5 stars TAKES ME RIGHT BACK,
This band knew how to work an audience. One of the most hardworking outfits on the scene at the time. Never stopped touring. No frills. No airs and graces, just no nonsense rock & roll. Great stuff.

5.0 out of 5 stars More! More! More!,
I bought this LP on 12″” way back in the days when men were men and dragons still breathed fire. I spent so long in ‘Our Price’ agonizing over the decision as to whether or not to invest – and it was one of my better decisions ever. I love this LP. As someone else just said ‘ if you like boogie, you must have this’. Just like early Quo, only with knobs on. Simple, basic 12-bar brilliance.

5.0 out of 5 stars Don’t make ’em like these any more,
It is incredible how fresh and inspired these recordings still sound after almost 30 years. I was too young (and living in the wrong country) to enjoy Spider during their heyday and only discovered their music by picking up scratched copies of their LPs at the local lost & found in the late eighties, long after the band had disbanded.
The music is still as driving and rousing as it used to be when I first heard it. If I had to decide between a single Spider album and most of what has been released in the genre after the band demise there would be no question how I would decide. If I would have to choose ten albums to take with me on a lonely island… there would be at least two albums by Spider. Every time I listen to Col melody lines or Sniffa blistering solos the sun goes up!