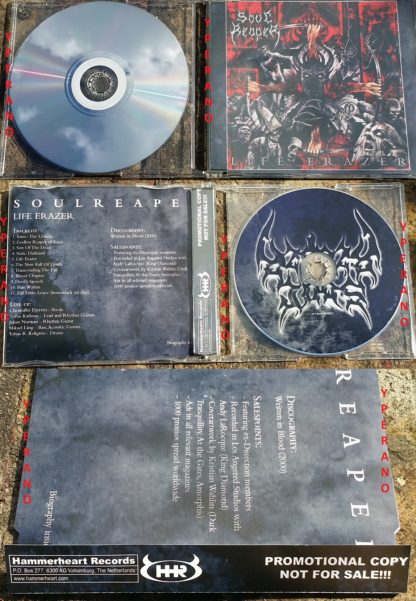 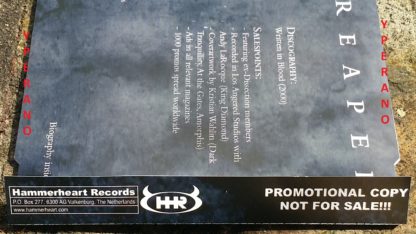 After drummer Tobias R. Kjellgren and guitarist Johan Norman had left the legendary DISSECTION, they founded the band REAPER, to play an even more brutal kind of Death Metal. 1998 Nuclear Blast got a 4-track demo of REAPER into their hands and signed them right away. The result was the debut “Written In Blood”. The name had to be changed into SOUL REAPER because of another band of the same name. The album received good to great reviews everywhere, but could not even come close to DISSECTION. They didn’t want to either as the sound had been a lot more American and more brutal.
Four years later I now have the follow up “Life Erazer”, which brings improvements in almost all categories The band SOUL REAPER is still damn brutal, but everything sounds more ordered and better structured. So to say a hit album for Death Metal freaks! Here we get almost perfect blasts, thrashs and also growls all the way! Maybe the songs have turned a bit more progressive, which does not take away any of the power and accessibility! The technical standard is very high, drumming, guitar work, production, everything the finest. But no song really stands out, everything sounds like from one mould! But “Son Of The Dead”, already known from a 7-inch, is my favourite. Would be part of a sampler for the car!

Apart from that thumbs up for a very good Death Metal CD, which cannot reach classics like “Altars Of Madness”, “Scream Bloody Gore” or “Storm Of The Lights Bane”, but blows away the majority of the current productions!

Btw, as bonus track for the Digi we are treated with a very good cover version of the MORBID ANGEL smasher “Fall From Grace”!!! 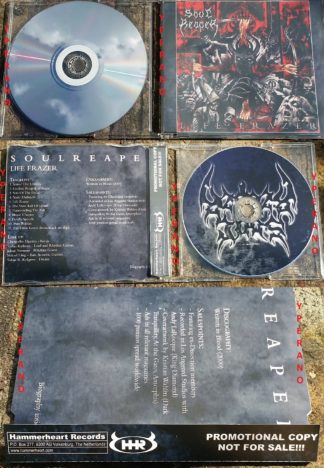