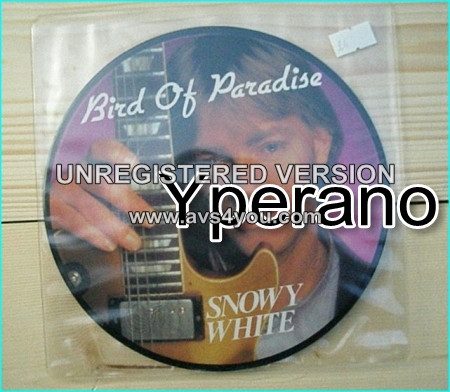 “Bird of Paradise” is the debut single from former Thin Lizzy guitarist Snowy Whites debut album White Flames, released in 1983. The single was released in 1984 and became Whites biggest hit ever, reaching the Top 10 on the UK Singles Chart, peaking at #6. The song was the only single released from the album. It is Whites signature song.

White had been recommended to Pink Floyd by Kate Bushs former manager Hilary Walker, as they were looking for an additional guitarist for the live band on the In The Flesh tour in 1977. Whites solo on “Pigs On The Wing”, although ultimately not used for the Animals album version (it appears on the 8-track version), was his first time playing for the band. During the tour, White started off the show himself by playing bass on the song “Sheep”, as well as soloing during “Have a Cigar” and “Shine On You Crazy Diamond Part VIII”.
In 1979 Thin Lizzy guitarist Scott Gorham saw White play with Pink Floyd in New York during the In The Flesh tour and approached him about joining Thin Lizzy.The collaboration with these two bands was very complicated; the invitation to rehearse the live show of The Wall for Pink Floyd, happened at the same time he was invited to become a full-time member of Thin Lizzy, with whom he recorded/co-wrote their Chinatown and Renegade albums.
Whites connection to Pink Floyd continued in later decades. White was invited by the former Pink Floyd bassist Roger Waters to perform in another take of The Wall, in 1990, by the ruins of the Berlin Wall, along with other guest artists. Waters also called on White in 1991 for the ‘Guitar Legends’ concert, in Seville. David Gilmour was the guest on Whites 1994 album Highway to the Sun, appearing on the track “Love, Pain and Sorrow”, with Gilmour playing his Digitech Whammy pedal-induced Fender Stratocaster, which was recorded at Gilmours houseboat studio, The Astoria.