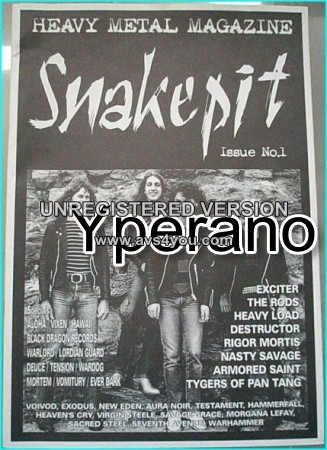 A super zine mainly featuring bands that had split-up long time ago already and / or played old school Metal exclusively. At that period of time, nobody really seemed to care about traditional Metal acts any more and a totally unknown act from Sweden named HAMMERFALL had just released their debut full length…
Thanks to the DESTRUCTOR interview featured in this issue, there was a CD re-release of their “Maximum Destruction” album, but also the band got enough motivation to reform again and give it another try. Next to DESTRUCTOR SNAKEPIT # 1 featured interviews with a.o. VOIVODs Away (about his artwork), Marty Friedmann (about his activities in ALOHA / VIXEN / HAWAII etc.), Tom Gattis (about DEUCE / TENSION / WARDOG), EXODUS, TESTAMENT, EXCITER, THE RODS, VIRGIN STEELE, HEAVY LOAD, RIGOR MORTIS, NASTY SAVAGE, ARMORED SAINT, TYGERS OF PAN TANG and a BLACK DRAGON RECORDS label special. Some Death thrashing Metal was also included already (AURA NOIR, EVER DARK, MORTEM, VOMITORY, WARHAMMER).
So, if you missed out on SNAKEPIT # 1 back when it originally came out, this is your chance to pick it up now.