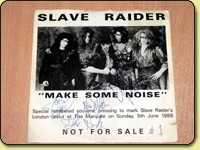 Slave Raider was an American heavy metal band formed in 1985 that was known for its over-the-top antics, heavy make-up and glam song lyrics. In the 1980s, the Minneapolis music scene was primarily known for The Replacements, Soul Asylum, Hüsker Dü and Prince among others. In the Twin Cities, Slave Raider had a sizeable following that were known as “The Raid”. They opened for such 80s bands as Ratt and Poison with the original line up.
The band recorded three albums in the late 1980s and early 1990s, but were never able to make much of a dent in the glam metal scene of the time due to the beginning of the grunge movement that has been attributed to the influence of their fellow Minnesotans, The Replacements.
The band was dropped by its record label following their third album release in 1990 and broke up soon after that with the band members going on to solo projects. The original line up has periodically reunited since then to perform the occasional reunion show that is always “standing room only”.
The song “Youngblood”, written by Slave Raider members and performed by Slave Raider, appeared in the 1994 movie entitled The Paper, which was nominated for an Oscar.
Slave Raiders “Make Some Noise” (written by Slave Rader and D. Nagel) appeared in 1988s License to Drive.