Fans of hard rock know the name SHOTGUN MESSIAH well. The Swedish combo delivered two albums of hook-filled sleaze ’n’ roll with 1989’s “Shotgun Messiah” and 1991’s “Second Coming” and managed to go  from Scandinavian rising stars to Sunset Strip heroes in no time. Both “Shotgun Messiah” and “Second Coming” have NOT been available at music retailers since the ‘90s and their albums have become highly collectable. 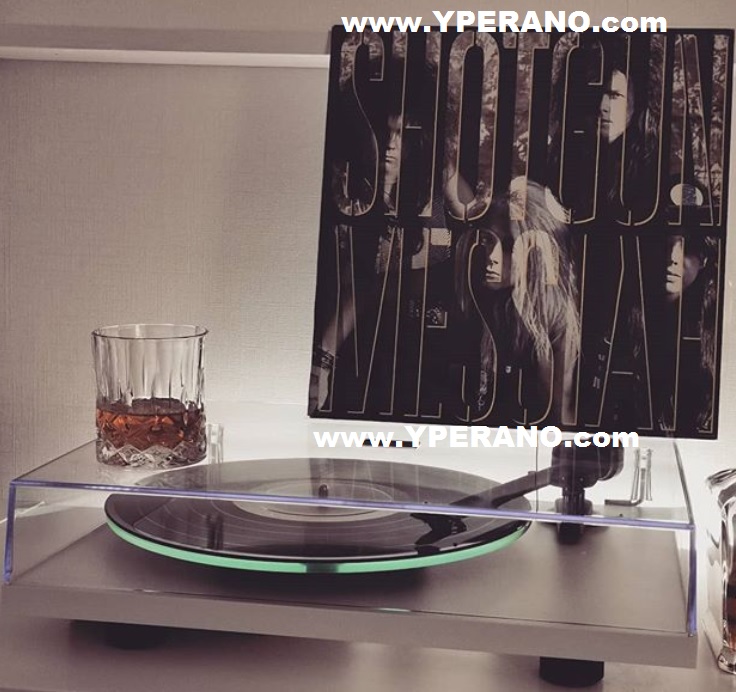 Made a quick video of this vinyl for sale:

When the vinyl was turned (end of the video) it got a bit of dirt (from the grass) on it….

Shotgun Messiah were a glam metal band originally from Sweden;
The band originally went under the name “”Kingpin”” while in Sweden, recording the album Welcome To Bop City; the line-up featured Zinny J. Zan (vocals), Tim Skold (going by “”Tim Tim””) (bass), Harry K. Cody (guitar) and Pekka “”Stixx”” Ollinen (drums). This would become the original line-up of Shotgun Messiah as the band changed their name and relocated to Hollywood, California. The album they released under the “”Cools”” name was re-recorded and released as Shotgun Messiah self-titled debut album, Shotgun Messiah. The style of this album was kick ass glam metal of early 1980s American bands such as Motley Crue and Ratt. 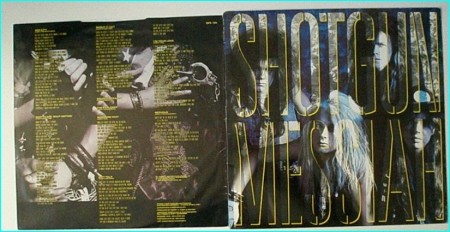 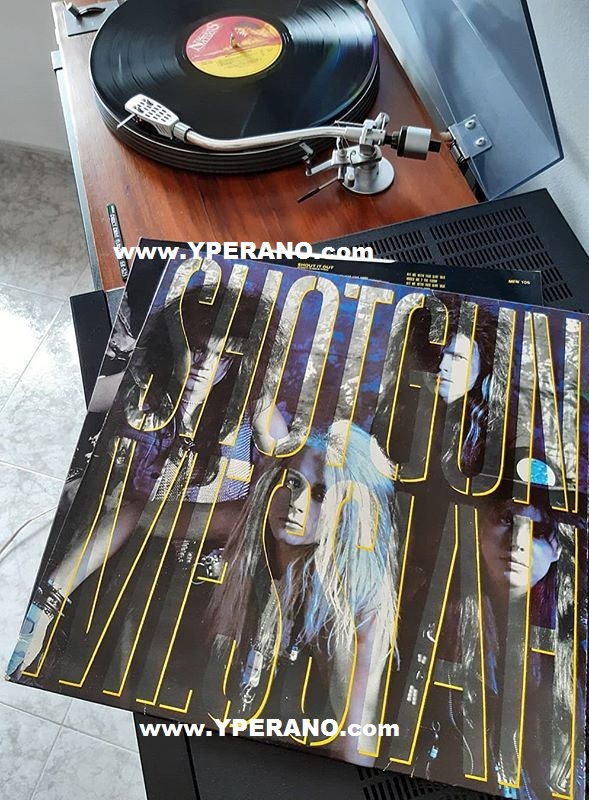 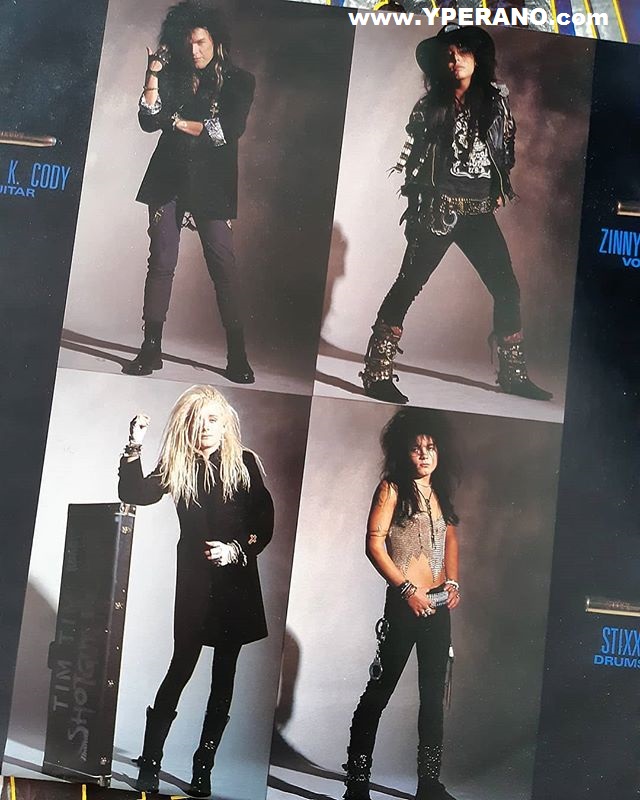 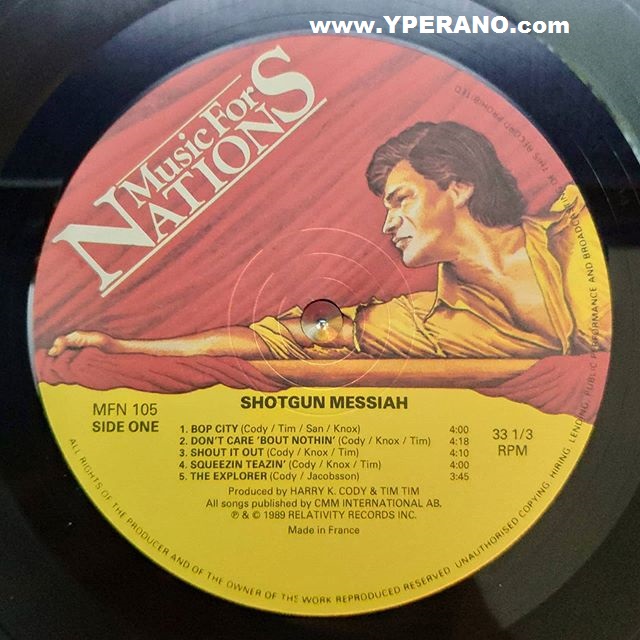 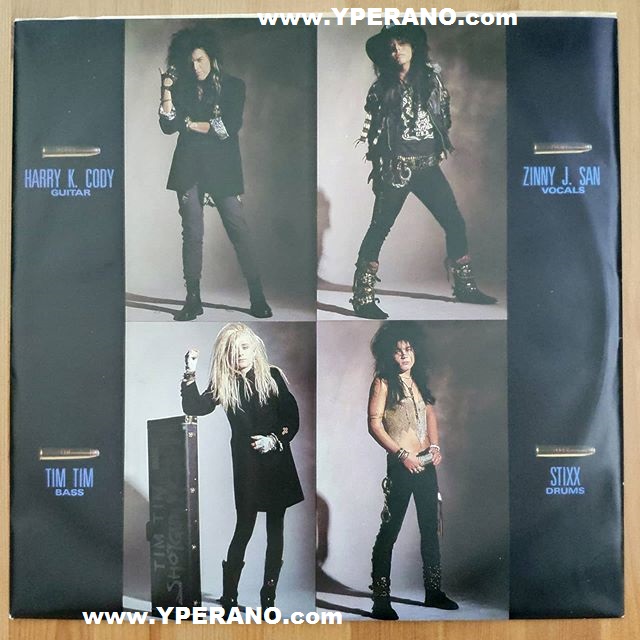 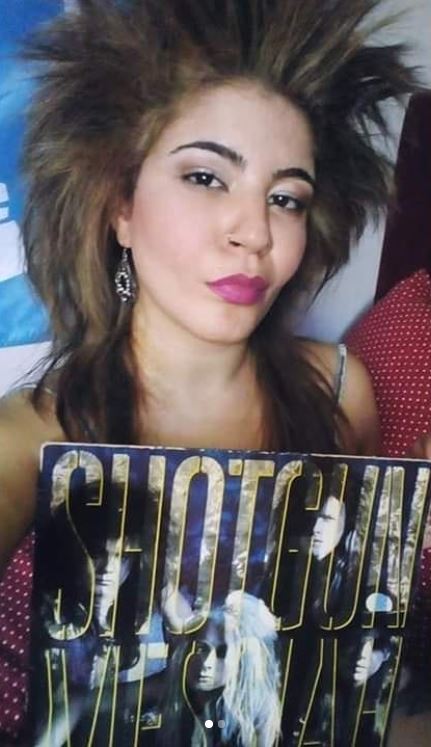 Highlights for me are, “”Don’t care bout nuthin””, “”Explorer”” and “”Nervous””, but it is still one of the top played on my turntable.

Harry K Cody guitar work is outstanding, and the rest are no slouches.

1.Bop City(9/10)Great rockin tune.A party favorite of mine.If you like the 80 you’ll love this track.

3.Shout it Out(7/10)This one was a club favorite I believe when they performed.Good tune!

4.Squeezin Teazin(8/10)Another cool metal song to blast in your car,Love the lyrics to this one!

5.The Explorer(instrumental)(9/10)This guy can shred up a storm.Nice fret work showing off that guitar talent.

7.Dirt Talk(8/10)The bass on this one sounds superb. Another cool tune for the record.

8.I’m your Love(9/10)The guitars and vocals are impressive on this one.

9.Nervous(10/10)Save the best for last.Want hi-octane electric guitar fury and great sing a long vocal chorus, then this is the one.The best track on here, it worth buying the album for alone.A stunningly fun song that very impressive.The guitar work is out of this dimension.

Overall if you love 80 metal buy this, you won’t be sorry!
——————————————————————————————-
5.0 out of 5 stars Hollywood hair metal with some wicked guitar,
Hollywood (by way of Sweden) hair metal band Shotgun Messiah released their self-titled debut album in 1989, when this kind of party rock ruled the airwaves. The band had just about everything necessary to be big stars in the scene – big hair, big guitar hooks, big attitude – but never really broke through to mainstream success.

Shotgun Messiah debut is fairly typical of the Hollywood rock sound. It put it somewhere between Faster Pussycat and L.A. Guns. They had that glam sound, but also some streetwise sleaze appeal. Zinny Zan vocals were more or less screeched, and are the album weakest element, but they’re balanced by some very good guitar work by Harry Cody, who could really shred. Check out the instrumental song “”The Explorer”” to hear him really cut loose. The songs are pretty basic, and the lyrics are typical for the time and place, but I love this kind of rock so that doesn’t bother me at all.

Shotgun Messiah released a follow-up to this album in 1991 (Second Coming) before changing to a more industrial sound and then fading away. If you’re a serious hair metal/glam metal/whatever you want to call it fan, you definitely need to check out Shotgun Messiah. Unfortunately this album is fairly tough to track down and expensive when you find it.

——————————————————————————————-
5.0 out of 5 stars Technical Guitar Masterpiece,
I originally heard about Shotgun Messiah from my local guitar store. What sets Harry K Cody apart is his style. It really different than many other players at the time. He can shred, but instead chooses to play more tasty melodic licks. And he is a master of the tremolo system. That one part in the explorer is awesome when he dive bombs, the song cuts out and then he just makes noise with the strings. Truly genius.

It was in 1985 that Easy Action split. If we all know Kee Marcelo, who raged for some time with the emperors of hard melodic Europe; we forget that the group had in its ranks a singer who sweated glam, sequins, feathers in the ass, rock, sleaze, a certain Zinny J Zan.

And the Zinny did not let itself be taken down. He sets up the Kingpin group with his compatriots Tim Sköld (bass and future Marylin Manson among others), Harry K Cody (guitar and named Harri Kemppainen in civil) and Pekka “Stixx Galore” Ollinen on barrels. Guys release Fire of God Glam / Hard Us album called Welcome To Bop Cityin 1988. But guys are ambitious. They decide to give in to the songs of the American sirens by relocating to Los Angeles and change their name to adopt the more famous one of Shotgun Messiah. The guys remix their album making it sound more American and the eponymous Shotgun Messiah album was born. We also slightly refined his look so that we are a little more in tune with the American tastes of the time, basically a mix of Mötley period Girls and LA Guns.

On the menu, good old glam which stains like the villager on Dédé’s shirt, sorry which stains like lipstick on the cheek of a beautiful blonde. The band’s influences are simple, they are somewhere between Mötley, Ratt, Van Halen and Hanoi Rocks with a sleaze punk touch that feels good. We feel an urgent and uncompromising side very effective which makes this album remain a classic of the genre and probably one of the basic influences of future sleazers made in sweden like Crashdiet and Hardcore Superstar.

The album starts very strong with a “Bop City” stuck between Glam and Sleaze. The formidable and effective riff all enhanced by Zinny Zan’s baltringue vocals is a classic of the genre and above all an excellent appetizer on the album which begins.
“Don’t Care ‘Bout Nothin’” is neither more nor less the answer made in Sweden to the Hard Us of Los Angeles. The chorus is addicting, the arrangements and tweaks of Cody’s guitars alternately bonbec but with a Vanhalenian influence in his playing is incredibly effective.
Back to the big Sleaze with “Shout It Out” which announces the killings that will come from their compatriots from Crashdiet. The only difference is Zinny Zan’s nasal vocals and her babes repeated until overdose makes this song still a must. But tell me? Isn’t this record a killer? But yes because the future songs are just as excellent.
“Squeezin ‘Teazin’ and his big bassline is a weapon of mass destruction. It’s Glam, it’s Sleaze, it’s good!
“The Explorer” is an instrumental where Harry K Cody shows us that he is an excellent shredder and that he has no lesson to be learned from any white mouthpiece on the guitar. It’s technical, it’s good and there’s a level.
“Nowhere Fast” is a return to Glam / Sleaze à la Ratt which suits the group well. Do you want some cowbell? Well here it is! Do you want nananas? Well you’ve got plenty inside, buddy!
Heavier with its HUGE “Dirt Talk” bassline is a treat to listen to. The more Sleaze you die. Deliciously salacious lyrics are a must. If you are into glam and bullet hole this is for you (and others too). Tape me by saying dirty things, sweetheart. Rrrrrrrr
“I’m Your Love” is still a good time with its very heavy riff typical of the time. We’re not far from White Lion’s “Hungry”.
We end on a very good note with a thunderous “Nervous”. The group’s Sleaze Glam is definitely a very well put together formula. And disappointment. The album is already finished.

First try for Kingpin / Shotgun Messiah and a great success which makes this album a must to come out of the closet for connoisseurs and to discover for neophytes.