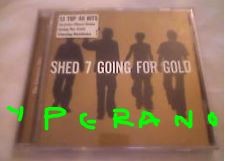 Going For Gold is a singles compilation album by the British rock band, Shed Seven, released in May 1999 via Polydor Records. The album features sleevenotes written by Mark Sutherland, the former editor of Melody Maker, who refers to the LP as the bands “Best of Album”, whereas the album artwork itself carries the sub-title The Greatest Hits.

As well as compiling the bands singles from 1994 to 1998, Going For Gold featured newly recorded versions of two previous releases, “Dolphin” and “Ocean Pie”, alongside brand new material in “Disco Down” and “High Hopes”. “Disco Down” went on to become the last Banks-era hit for the band when issued as the albums lead single, two weeks prior to its release, whereas the follow-up single, “High Hopes”, was never issued.
Like “Disco Down”, the song was initially included in the albums tracklisting with the intention for it to be issued as a single,but was sidelined post-album release by the bands record label in favour of a proposed re-issue of their 1996 single, “Going For Gold”.Following the bands refusal to comply, Shed Seven and Polydor Records parted company in late 1999, as “High Hopes” became the only track featured on the compilation which was not a ‘hit’ single, and Going For Gold became the bands final album release during their time with the label.
The Greatest Hits wasn’t our idea we felt it was a few years too early but agreed to do it on the understanding that we would release two new singles from the album. ‘Disco Down’ did really well and we were all prepared to follow it up with ‘High Hopes’, the video script was approved and it was ready to go to radio, when some higher authority decided it would be a better idea to re-release ‘Going For Gold’ instead. We put our foot down and said ‘no way, we are not going to rip off our fans with old material’. In fact, most people at the label thought it was an awful idea.
Rick Witter, December, 1999
A limited edition 2 CD set was issued at the same time as the regular album and featured a bonus disc of four newly recorded session tracks one song from each of their four studio albums to date (including Going For Gold itself) two cover versions and a previously unreleased demo. To coincide with the release of the album, the band went on an 8-date ‘Greatest Hits’ tour of the UK, beginning at Bristol University on 12 May and ending in a hometown gig at Yorks Barbican Centre on 4 June.

Going For Gold received mixed reviews upon release. John Harris of Select felt that the album proved that the band have “always been blessed with the knack of creating admirably tidy, creditably catchy pop music” in his complimentary review, whilst Allmusics Jason Damas labelled it “an excellent compilation of radio-ready rock & roll from one of the best singles bands of the 1990s”. Howard Johnson of Q gave praise to the bands “epic sweep”, but found fault with Witters vocals, noting that;
…they do know a pop lick when they come across one… But you can’t help wondering just how big they could have become if (Ricks) vocals had been truly distinctive rather than simply acceptable.
NMEs Victoria Segal, however, was less impressed with the LP, stating that the album “is a flooded engine of a record”. Caroline Sullivan of The Guardian surmised that Going For Gold showed Shed Sevens “real talent” to be “persistence” and thought that the album lacked diversity; “Few of the tracks diverge from the doggedly catchy guitar rockin’ model set by their first hit, Dolphin”.

“Disco Down” was the one and only new single taken from the compilation and was the bands final single release from their six years with Polydor Records. It was released on 17 May 1999 and went on to spend a total of four weeks on the UK Singles Chart, peaking at number 13 on 5 June.

Be the first to review “SHED 7 Going for gold 2CD. 1999 version 2CD version with a bonus disc of 7 rare tracks. s” Cancel reply