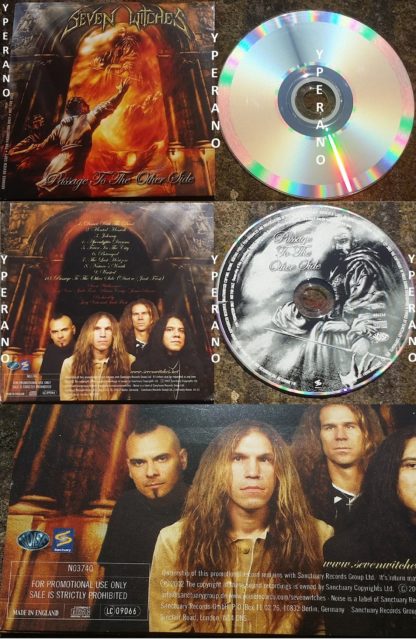 SEVEN WITCHES Passage To The Other Side (2002 UK 10-track advance promotional CD featuring the fourth album from the US metallers and the first to feature James Rivera singing! Housed in a custom card picture sleeve).
2002 UK 10 track promotional CD album issued by Noise/Sanctuary.
Packaged in a card sleeve.
Excellent condition.
Catalogue No. NO3740.

James Rivera (Helstar singer) recorded two albums with the band, Passage to the Other Side and Year of the Witch.

Passage to the Other Side is the 4th studio album by Seven Witches; its the first album with James Rivera singing, and the album also features bassist Joey Vera from Armored Saint. Many fans consider this release to be the best of them all. The album features a cover of Def Leppard’s song Wasted from their debut album, On Through the Night. 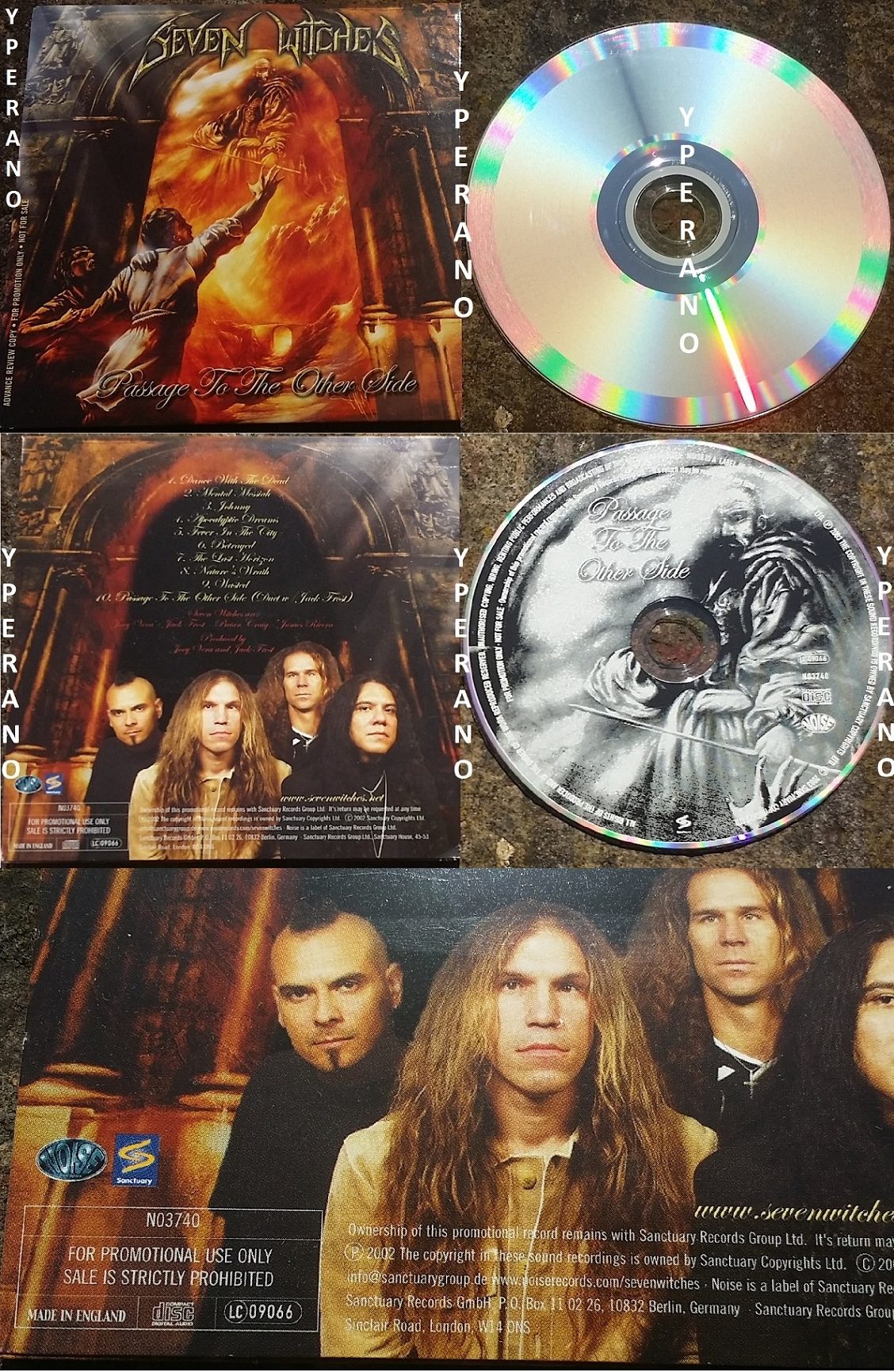 I like to describe Seven Witches as a cross between Manowar and Nevermore. They have gained attention in the metal community for their tendency to match modern aesthetics with classic metal oriented song structures. This album is considered by some to be one of their strongest efforts and is the first to feature Helstar vocalist James Rivera, the only album to fully feature Armored Saint bassist Joey Vera, and the last to feature drummer Brian Craig.

Musically, the bands sound is dominated by solid hooks and generally fast paced riffs that cover a lot of metal styles. Dance with the Dead and The Last Horizon have a strong power metal feel to them. Mental Messiah, Johnny, and Fever in the City are practically speed metal. The title track is an epic ballad number. The band even embraces hard rock with their gritty cover of Def Leppard’s Wasted.

On the modern side: “Apocalyptic Dreams features guitar effects that remind me of something that Tom Morello would try out, Betrayed is a mid-tempo groove track, and Natures Wrath brings to mind a less depressing Alice in Chains with its particularly crunchy riffs.

The band also puts on a solid performance throughout with guitars that are often melodic but with a strong crunch, vocals executed in shrieking Halford/Dickinson worship, and plenty of opportunities for the rhythm section to shine. Most listeners would be accurate when accusing the band of being cheesy, but I’m pretty sure that’s what they were going for in the first place. It is fairly obvious that the band exists to honor their musical heroes and they do a pretty decent job of doing so…
Pros: Pretty accessible songwriting and good variety present, the band puts on a solid performance
My Current Favorites:
Dance With the Dead, Mental Messiah, Johnny, The Last Horizon, and Wasted
All in all, it may be the best album that Seven Witches put out and would probably be a good purchase for newer fans.
——————————————————–
5.0 out of 5 stars Traditional Heavy Metal is Still Being Made,Even in 2002
Some bands manage to capture a sound that completely derives from the old masters. Judas Priest, Iron Maiden, Accept, Dio and to a lesser status Savatage. And even though the market for this stuff has long since dried up. Bands like Hammerfall, Steel Prophet, Primal Fear, Dream Evil, and now Jack Frosts Seven Witches still fly the banners high and still release traditional heavy metal records.
This new CD has a different singer and bassist though. The singer does a fair job and the bassist is Joey Vera of Armored Saint & Fates Warning.This record has a great dark and heavy vibe.Jack Frosts playing & riffing really reminds me of Jeff Waters.First track Dance With the Dead starts off a heavy pace followed by a very Priest like track called Metal Messiah. The heaviness continues through the entire disc with Fever in the City being a standout.A wicked little riff.Betrayed is right off of Hall of the Mountain King,almost a nod to Savatage that this killer riff could’ve been yours.(Jack Frost did some touring with Savatage). This CD also follows suit in doing a cover.This one is Def Leppard’s Wasted.A high octane version with double kick drums that make for a much heavier track than the Leps laid down.The title track closes things out.And after a shred fest of 9 tracks of true metal,Passage to the Other Side takes you on a journey through death and the final act of passing into the spirit world. A powerful song and a strong finish.Any fans of the bands I’ve mentioned should enjoy this album.Steeped in true heavy metal tradition Seven Witches still thinks its 1985.And 4An old rivet head like me,that works just fine.
——————————————————–
5.0 out of 5 stars Could easily be Halford solo album #3!!!,
Great new album from Seven Witches! New vocalist James is a dead ringer for Halford!! Check out the second track “Mental Messiah”. Uncanny!
The music sounds a lot like the recent Halford/Fight albums. Great straight ahead metal with unreal vocals! Can’t wait to hear the next album.
——————————————————–
5.0 out of 5 stars Great Album
Aaaaaah, the killer vocals of one James Rivera. The man knows how to sing, knows what the song needs & gets it done.
I happen to think the songs here are the stronger ones in their catalogue. Yup, its power metal, it is not inventing anything new & I could care a less….its good, the songs are catchy & rarely overstay themselves. Album highlights include Betrayed, Apocalyptic Dreams & title track are all really nicely done.
I am still waiting for Jack to write that “one” album that kicks us all up a notch, but this is as close as it gets….if you listen to this with an open mind & like Jack Frosts work you should enjoy this one.
——————————————————–
5.0 out of 5 stars Better than “They Think”,
Wow…a power metal band with the aggressiveness of fight. Rob himself would have to admit the carrying of a tradition. If your old school and like more than a sweaty mosh pit groove this stuff is on the mark.
Your A** WILL be Kicked!!! 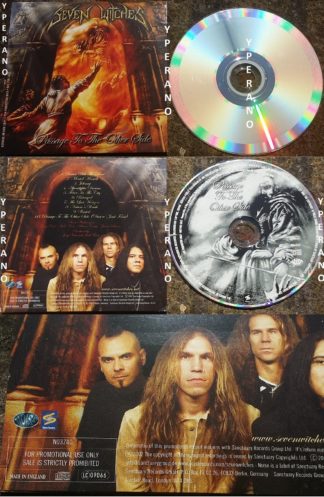