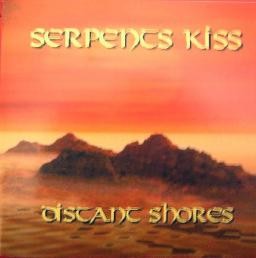 Here we have an interesting new UK outfit called SERPENTS KISS. The best thing about them is they have 2 female lead singer and a twin-guitarsound, while the music is very melodic. The band is playing Melodic Power Metal and comparisons to LANA LANE are of course easy to make here, but somehow SERPENTS KISS has an own sound. They sound like HAMMERFALL with female vocals, heavy but melodic, not only in the vocal department, but also the twin-guitarsound we love so much of bands like WISHBONE ASH, THIN LIZZY or MAIDEN can be heard in this band’s sound. Songs like Strider, Slaves to the light, Vipers and Kingdom are all very strong Melodic Power Metal songs with catchy memorable choruses and biting guitarwork. The vocal work is very good and all together this is a very good band to check out. Strutter’Zine

It can’t have been long ago that the many dissidents of power metal had felt their aims had been realised. No longer were long- haired throwbacks knocking out tunes about dungeons and dragons and no longer were guitar solos longer than the rest of the song. Finally, cool had become victorious and pretension had unfortunately overcome fun. But somewhere, somehow, the scene never quite gave up hope. With two lead female vocalists flanked by tearing twin guitarists, Serpent’s Kiss are a British power metal band that epitomise everything that is fantastic about the genre. MusicPress

This self-titled CD by Serpents Kiss is a melodic power metal release with enough unique twists in the band line-up and style to make it stand up and above the majority of the other new releases in a genre wherein one band too often sounds just like another.

Featuring two female lead vocalists, epic song-writing, and guitars that are large and loud when necessary and razor sharp when called for, “”Serpents Kiss”” is the kind of CD that you may not be sure about at first, but by the third track, you’re hooked and ready for more.

What interesting is that, if the band were fronted by a male vocalist rather than the female duo of Catherine and Kate, this CD wouldn’t have been quite as interesting. The female singers give the fantasy-laden lyrics (from songs such as “”Black Wizard”” and “”Strider””) a fresh feel, whereas a male singer might have drawn the songs into that cliche’d testosterone heavy sound.

But isn’t just the fact that the lead singers are female that makes Serpents Kiss worth a listen. Not only are these women extremely talented, but the band uses them in a smart way, alternating vocals, blending them when necessary, and throwing in a growl here and there to keep things rough.

The songs are all strongly guitar-driven and that also a plus considering the talents of guitarists Will and Mike, who lay down crunching riffs and fiery leads at all the right times.

Although their sound is considerably different than power metal monsters like Helloween or Stratovarius, fans of those bands will find something to their liking with “”Serpents Kiss.””