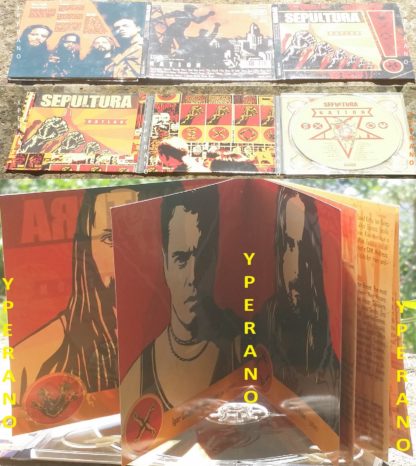 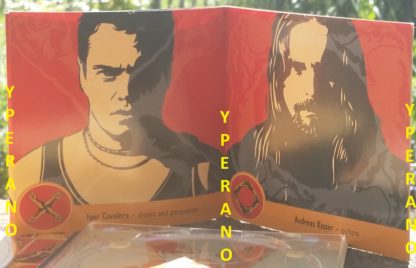 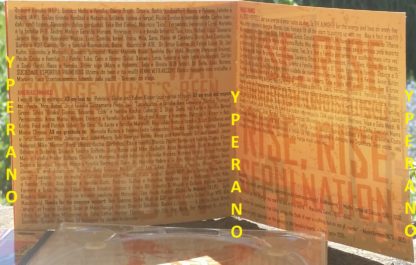 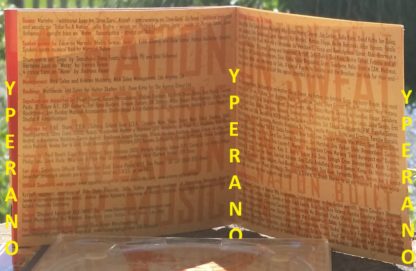 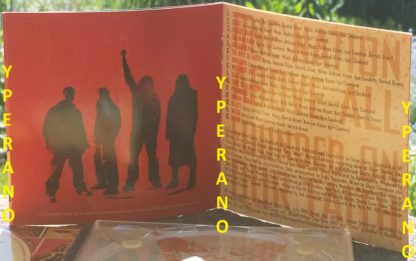 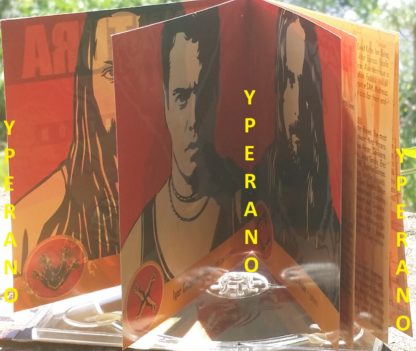 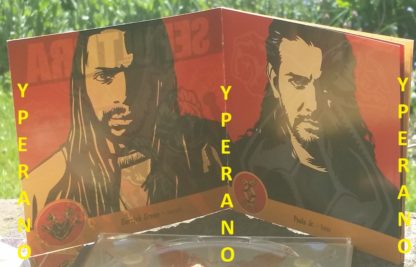 Nation is the eighth studio album by Brazilian heavy metal band Sepultura, released in 2001 through Roadrunner Records. Nation features guest appearances from artists such as Hatebreed singer Jamey Jasta, Dead Kennedys singer Jello Biafra, Ill Niño singer Cristian Machado, Bile frontman Krztoff and Apocalyptica.
According to the official site, a video for “One Man Army” was scheduled to be filmed at the end of August 2001. However, due to a lack of support from Roadrunner Records, the video was never made. Sepultura blamed Roadrunner Records for not promoting the album and left for SPV Records in 2002.

The album saw generally better reviews than Against, but sold fewer copies. Nation has sold over 80,000 copies in the USA and went gold in Brazil.
Q magazine – “A clutch of crowd-pleasingly brutal anthems…with a return to the more exploratory approach of old….the faithful will not be disappointed.”
Alternative Press- “There are plenty of touchstones to [their] days of headbanger hegemony….[new singer] Derrick Greens heightened tunefulness along with the broadened emotional resonance…should relate to an enlarged fan base.”
NME – “Fiercely political and uncompromisingly direct… its taut and tense and if you buy it quick you’ll get to hear their logic-defying cover of Bauhaus’ ‘Bela Lugosis Dead’.”

For Nation, Sepultura have gone home. This is the first album to be recorded in their native Brazil since they first appeared, quite literally kicking and screaming, in 1989. Its also the first time they’ve found their feet with Derrick Green at the front, and they are starting to sound more relaxed without Max Cavalera on lead howling duties. Igor Cavalera is still behind the drums, his tribal pounding standing as the vital groundwork for frantic and brutal songs such as “Revolt”, which often makes you wonder how the rest of the band keep up. There’s an overall feeling that its the band and their fans versus the world. Just look at the titles: “Sepulnation”, “Border Wars”, “Tribe to a Nation”, “Politricks”, “Human Cause”. Its a testament to their surroundings that they want to make their audience think–Brazil is divided by the extreme wealth of a few living alongside the extreme poverty of shanty towns, and you can hear the anger and frustration in the most accessible track, “One Man Army”
——————————————————–
5.0 out of 5 stars Rise Up, Rise Up, SEPULNATION
Forgot the past, that is history. Sepultura have shown again that there is no need to be referred with their former vocalist as they have set out their stall, and I must add, set it out excellent.
The angst of Against has been re-grouped and delivered with precision.
There is something for everyone here. Sepulnation is a call to arms and an anthem of the future. Revolt blows everything out of you, before you are left to recover through Border Wars.
Uma Cura is just plain heavy. It is all bass, and brilliant. Never heard anything like it. Who Must Die? is probably the stand-out track. Human Cause is just intensity personified.
Ending with Valtio you have experienced aural pleasure.
But then we get bonus. Oh what a bonus. Bela Lugosis Dead is quite possibly the best cover they have ever done, and Black Flags Rise Above is excellent. Revolt (demo) gives an insight into the progression of songs (this is now Saga).
All in all, value for money, you betcha. Top musicianship, excellent vocal range and in a world of rap-metal, Sepultura have raised their middle finger to all the doubters.
——————————————————–
5.0 out of 5 stars heavy – intelligent – awesome!!
1st impression, CD cover looked the biz – very soviet era, which fits perfectly with the concept theme.
2nd impression, CD rocks!!! from the off this material oozes class which only the seps can be responsible for. much heavier than its predecessor, as well as being a lot more approachable musically.
have to say that my fav tracks are ‘tribe to a nation’ and ‘politricks’ – awesome, eerie vocals on the latter!
a lot of folks out there have moaned that there wasn’t enough thrash content – or rather the shortness of the thrashy tracks on this CD was a let down – all i say to these people is that i personally feel the tunes fit well into the whole thing. with an almost constant barrage of noise the tracks ‘revolt’ and ‘human cause’ break up the flow of the album beautifully – i’m sure the boys knew what they were doing @ the production stage!
my final advice to people reading this, buy it now cos this is the sepultura of the new millennium, a band still a huge cut above the rest of the pretenders out there. here are a group of talented musicians who can still pump out an array of excellently crafted material – even after all this years. max is long gone now – and i love him to bits – but don’t let that put u off, Mr. green and the boys are doing just fine without him. CONGRATS BOYS, THE TRIBE STILL LIVES!!!
by the way the bonus tracks are tops!!! if u want a bit more punk/thrash then go for this didgipak rather than the standard CD – that’ll stop the whinging!!!
——————————————————–
5.0 out of 5 stars A Wake Up Call To All OF The New Metal Bands!!,
They have really found their sound again, Derrick Greene is a bloody amazing vocalist, you cannot compare him and Max they are just different both BLOODY amazing. There are some great riffs on this album One Man Army and Saga are what shine on this album in my view. A must have for anyone who wants a heavy aggressive and deep album.
——————————————————–
5.0 out of 5 stars Another great Sepultura album!!!,
Nation is just another example of how Sepultura are getting better all the time!! One song thrashing away with tracks like ‘Revolt’ and ‘Human cause’, then the usual highly complex, almost orchestral efforts such as ‘One man army’, finishing with the near classical ‘Valtio’.
Great mood music, especially good for keeping me awake at work! 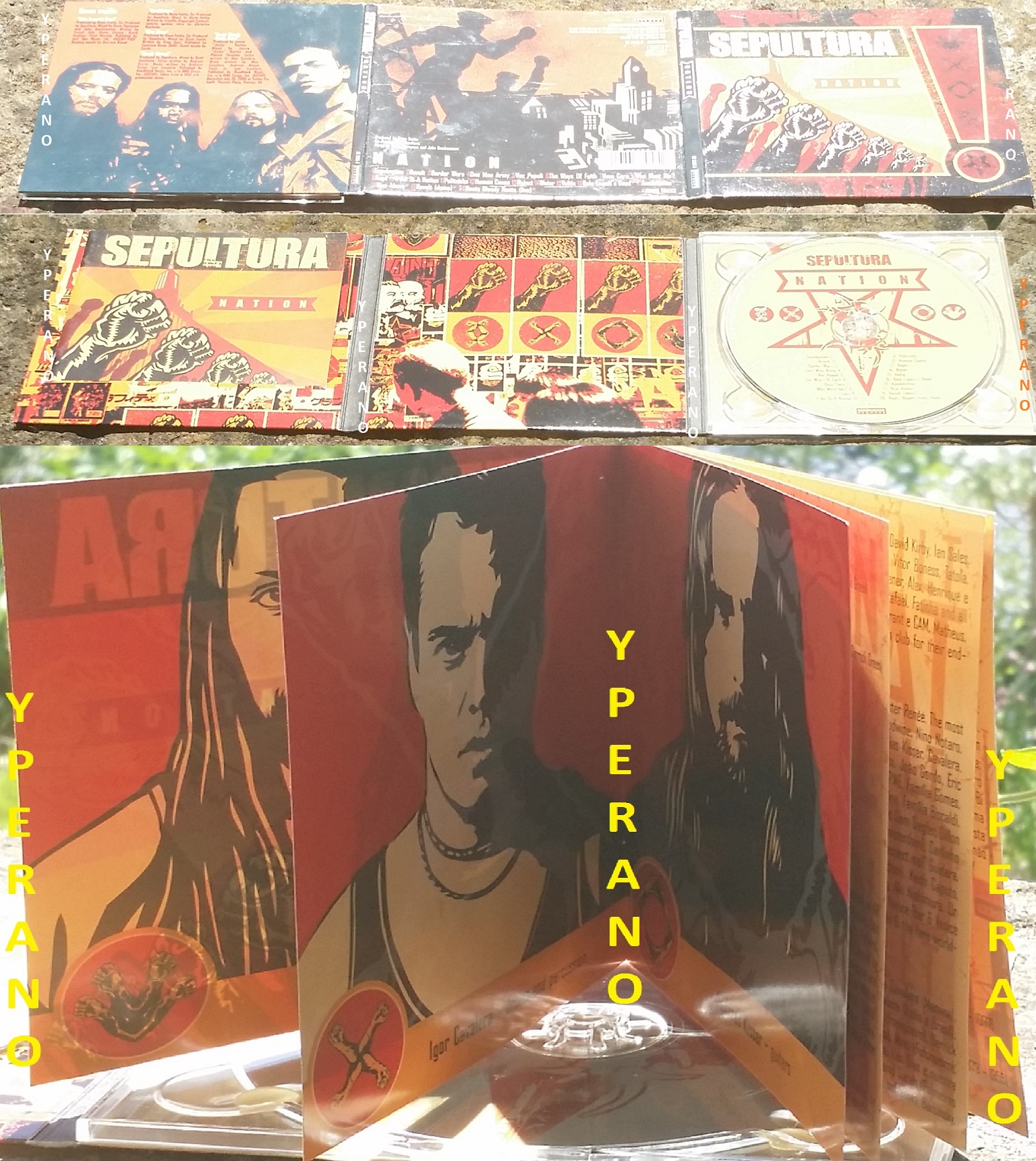 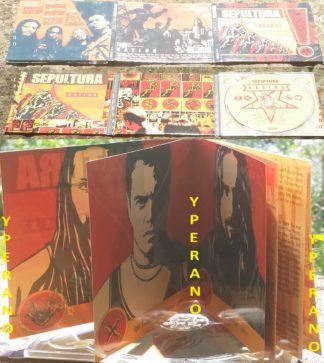