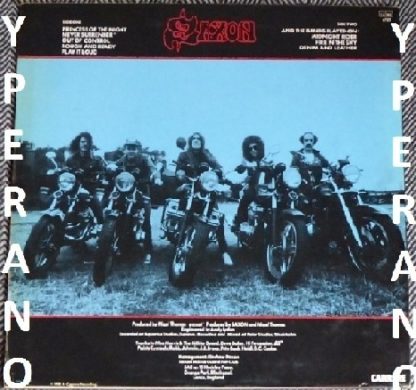 Denim and Leather is the fourth studio album by English heavy metal band Saxon released in 1981. The namesake of the album and song of the name was inspired by the popular attire of metalheads in the early 1980’s, defined by denim pants and leather jackets. The song is seen as a tribute from the band to their fans while describing the history of the sub-culture and the rise of the New Wave of British Heavy Metal (NWOBHM). This was the last album with the classic line up of Saxon, as drummer Pete Gill would ultimately leave the band to join Motorhead; this was also seen as the last of their triumvirate of classic albums (the previous two being Wheels of Steel and Strong Arm of the Law), which saw them stop making albums for over a year following the release of Denim and Leather, leading to them trying to reach mainstream success in the United States.
Though the album isn’t Saxon best selling, it spawned two of their most successful singles, “”And the Bands Played On”” and “”Princess of the Night””. There are nine songs on this album, which are noted for their heavy subject matter about a wide range of topics. “”Princess of the Night”” is a song about a powerful train and “”And the Bands Played On”” is about the resiliency of the heavy metal (particularly NWOBHM) bands. Other themes for the songs include: partying, the spirit of the music, fighting, and, like many of their songs, motorcycles.

Everything you need to know about this record:

Biff Byford to pick the best songs from their huge back catalogue:

PRINCESS OF THE NIGHT (Denim And Leather, 1981)
“Another song that underlined our ability to mix a huge riff with a strong tune. It was a very big track for us, and I like the title which just popped out. Because it could mean a steam train, or else a female! It sticks out on the Denim And Leather album for me”.

It would be easy to take a glance at the title and get the wrong idea of what Saxon’s Princess Of The Night is all about.

“Well, not every country in the world is into steam trains,” laughs vocalist Biff Byford today, as he revisits the song that helped establish Saxon as big players in the New Wave Of British Heavy Metal. “And while people sing along with the chorus, they don’t necessarily know all the rest of the lyrics. For instance, in Japan we had to explain what it was all about. I think they had their own theories of what a ‘princess of the night’ might be…”

The song came to Biff while Saxon were doing the Strong Arm Of The Law tour in 1980.

“I wanted to do a song about a steam train, because that was something I was really into when I was growing up in West Yorkshire. A few of us kids used to go down to the viaduct at night and watch the mail train rumble past. Then in our early days, the band would park our van at Barry Island in Glamorgan, a graveyard for steam trains. We used to try and nick things off of them as well. So, I had it in mind to do a song that would celebrate what was, even by 1980, a bygone era.”

However, it took a little while for Biff’s initial scribblings on paper to develop into the song Saxon fans know and love today.

“I had the chorus worked out with the melody line, and some of the verses, but it didn’t really all come together until Paul Quinn had an idea for the riff. As soon as I heard that, I knew I could make the lyrics I had work with it. I had to rearrange the riff a little to really get it all into place, but once we had that sorted, the rest flowed.”

Saxon actually rehearsed the song before recording it without drummer Pete Gill, which led to a slight problem…

“I can’t recall why Pete wasn’t with us, but we had a guy called Mark Pinder standing in, and he came up with a brilliant idea for the bass drum part in the second verse. But when he heard what Mark had done, Pete wasn’t very happy about it at all. We got him to do it in the end.”

The song was the opening track on 1981’s seminal Denim And Leather album, and released as a single, reaching number 57 in the UK chart. Over the years, it has become one of the band’s most loved and enduring songs.

“We knew when we’d recorded it that this was something special, but what we didn’t realise was how much the fans would take it to their hearts,” admits Biff. “It’s still one of our most popular tunes live. Everyone likes to join in the chorus, and it’s become a massive anthem for us.”

And when it comes to the metal legends’ evergreen live shows, Biff still delights in performing Princess Of The Night onstage.

“I never get tired of doing it,” he beams. “I’ve never thought we should drop it from the set because it’s becoming a ‘bit stale’. There have been times when we’ve had to leave it out, but that’s down to time restrictions, not because we are fed up with playing it.”

Princess Of The Night and the album that bore it would prove to be hugely influential within the bubbling NWOBHM scene, and the generations of bands that followed in its wake. If you listen to Metallica’s Seek & Destroy today, you’ll hear a guitar solo that’s clearly inspired by what was going on on Princess…

“Metallica have always said they’ve been heavily influenced by Saxon, and you can tell that with Seek & Destroy,” agrees Biff, before adding with a chuckle: “I wish they’d actually do a version of Princess Of The Night – the royalties would be useful! There are hardly any covers of that song, actually. When you consider that it’s such a simple, singalong song, that’s surprising.”

Ultimately, though, Biff is proud that Saxon are still helping to celebrate a bygone era.

“I like to think that whenever the band perform it, we are doing our bit to keep steam trains in fans’ minds!” he laughs.

One of the most underrated songs by an already underrated band! Just kick ass