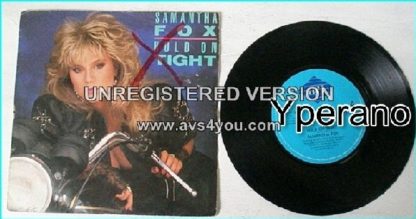 “Hold On Tight” was the third single from of British singer Samantha Foxs 1986 debut album Touch Me.

“Hold On Tight” is a classically-styled rock & roll song. The late 1980s saw a renewed interest in retro-1950s pop culture, in part spurred on by the film Back to the Future. “Hold On Tights” electric guitar and backbeat serve to evoke a 1950s rock & roll sound.

The music video reflects the songs rockabilly sensibilities by showing Samantha Fox in a diner sporting a ponytail, midriff-baring shirt, denim hot pants, and cowgirl boots. Soon after putting her song on the diners jukebox she heads outside, this time wearing a fringe trimmed red leather dress. As she sings “Hold On Tight” Fox dances with greasers and youths in letterman jackets and poodle skirts, typical of 50s fashion.

Be the first to review “Samantha FOX: Hold on Tight [Sam in a motorcycle + super tits] 7″” Cancel reply 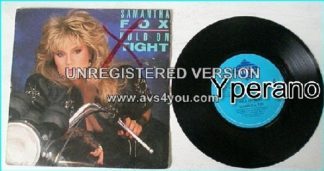