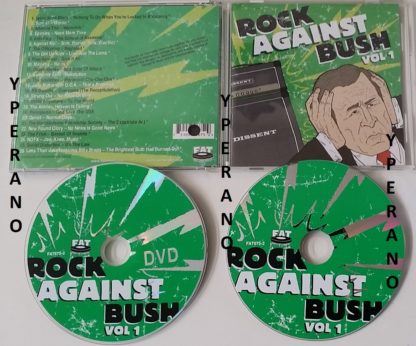 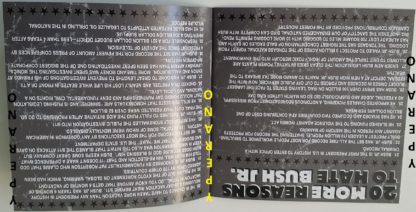 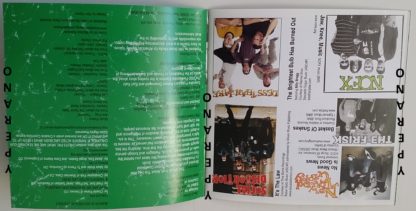 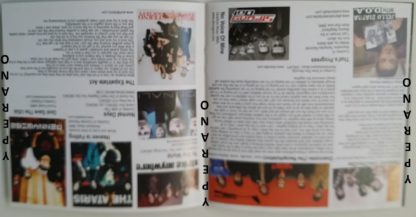 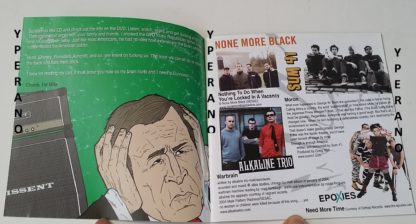 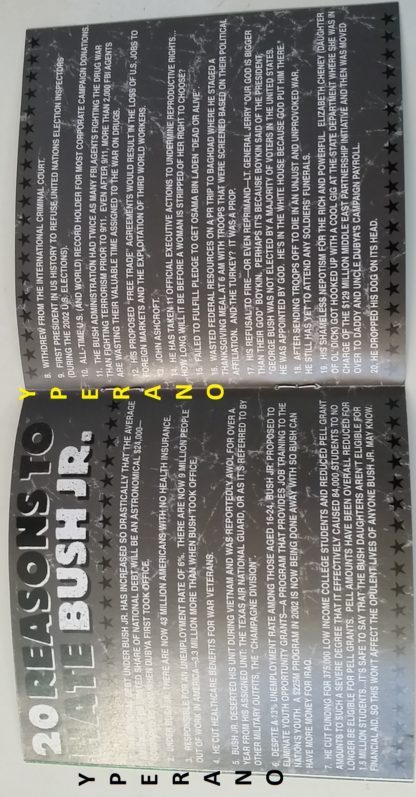 The bands on this comp have come together for one reason, and thats to express our outrage at – and form a unified front against – the dangerous, destructive, and deadly policies of George W. Bush and his administration. 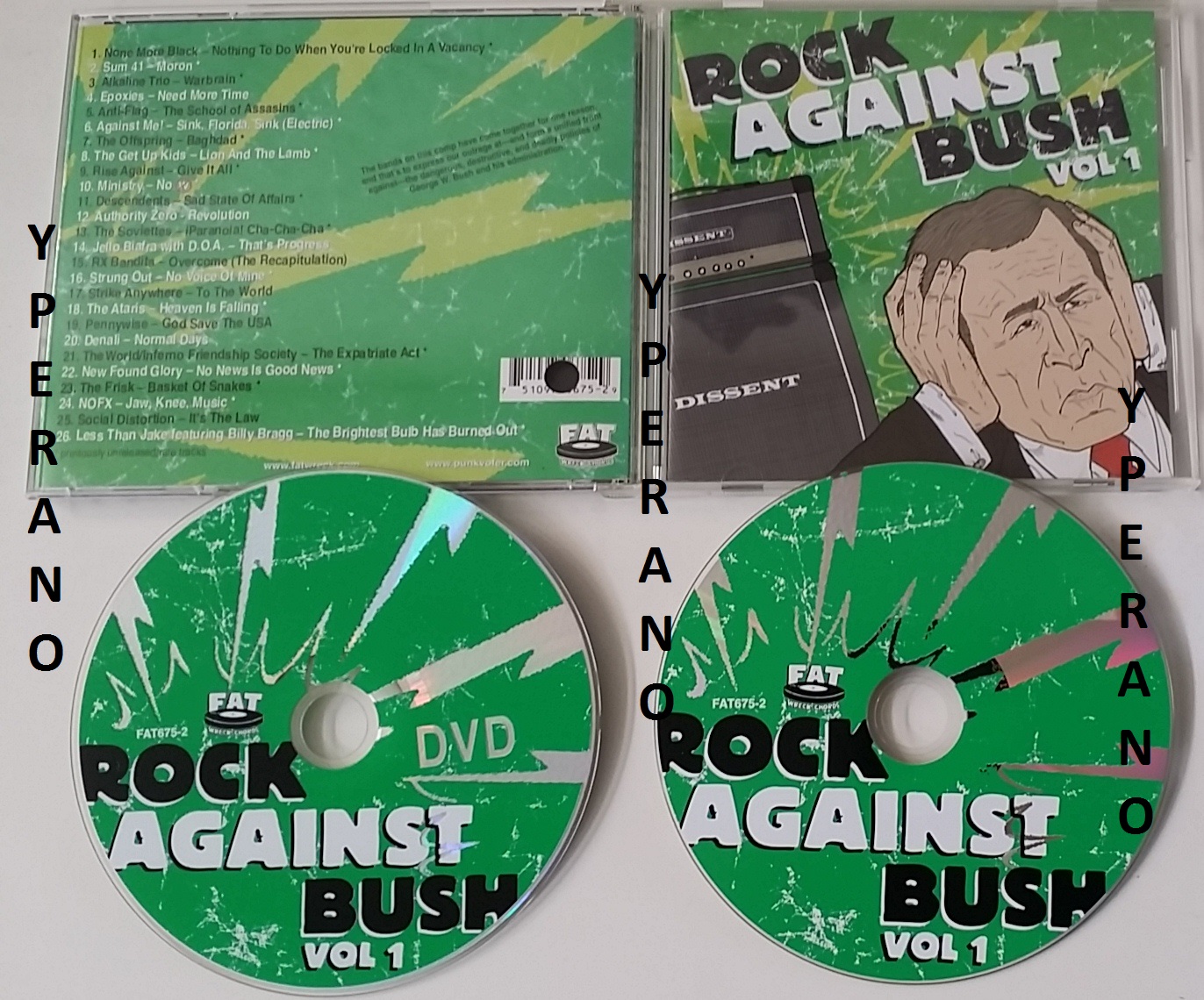 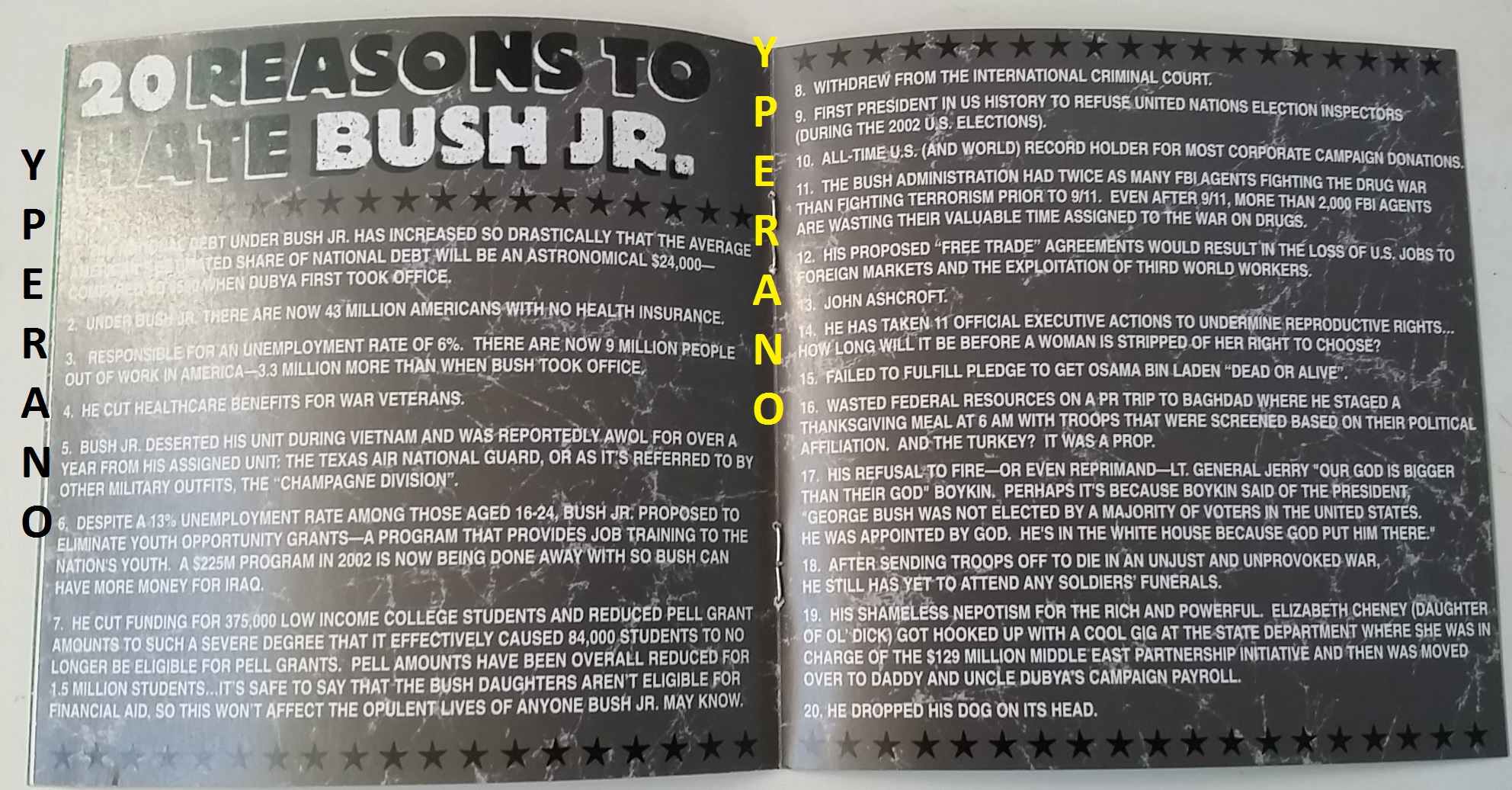 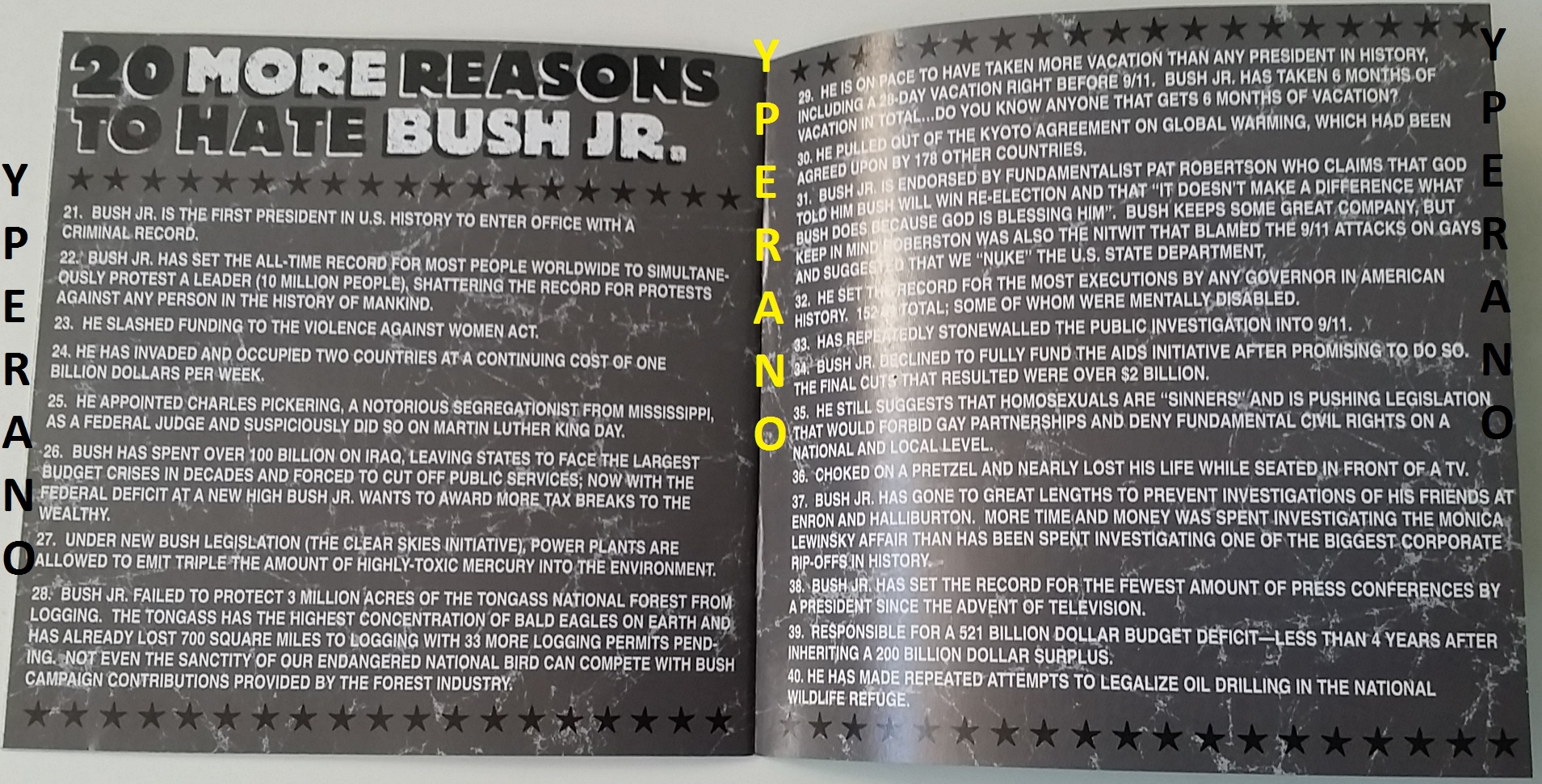 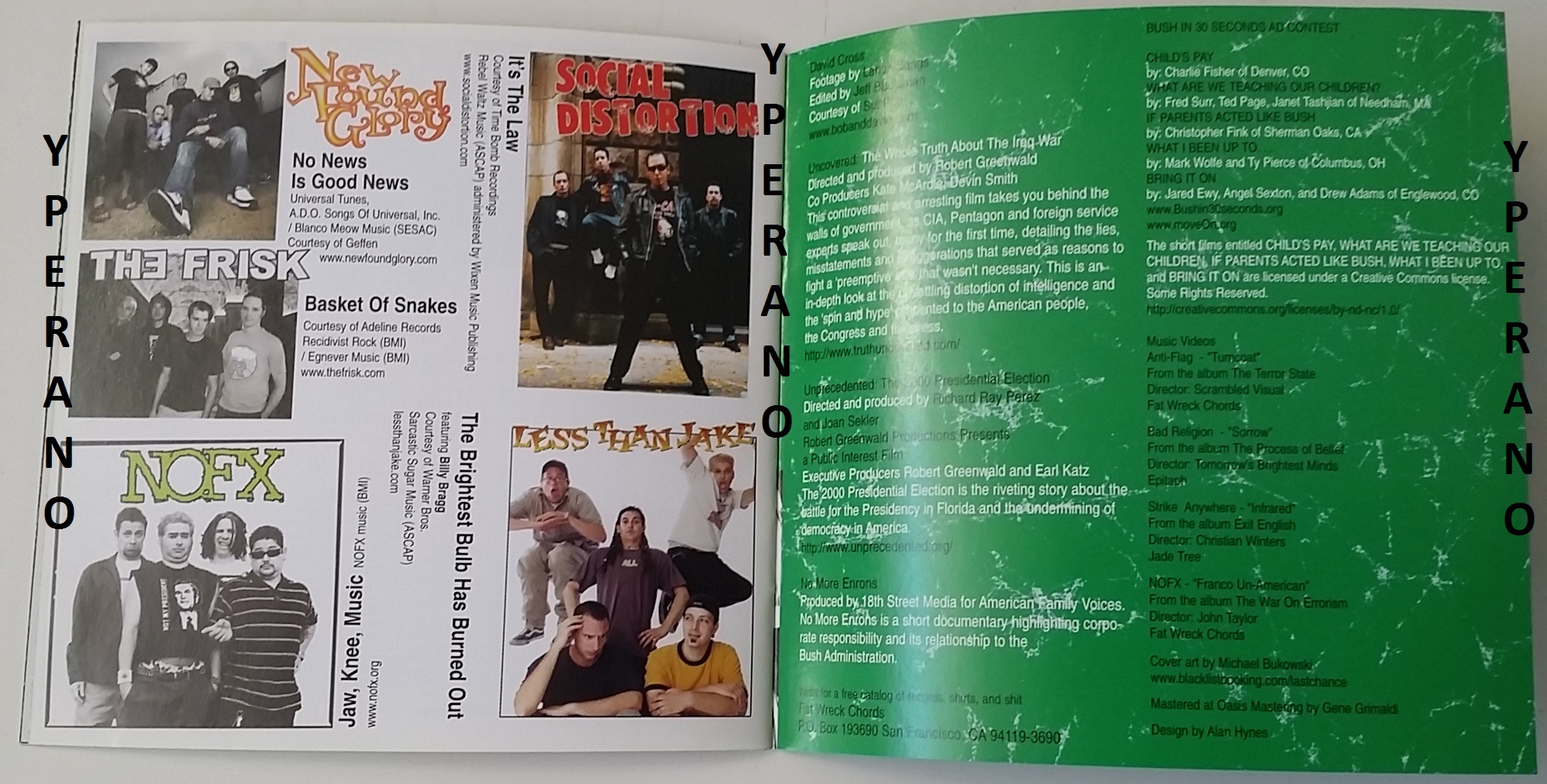 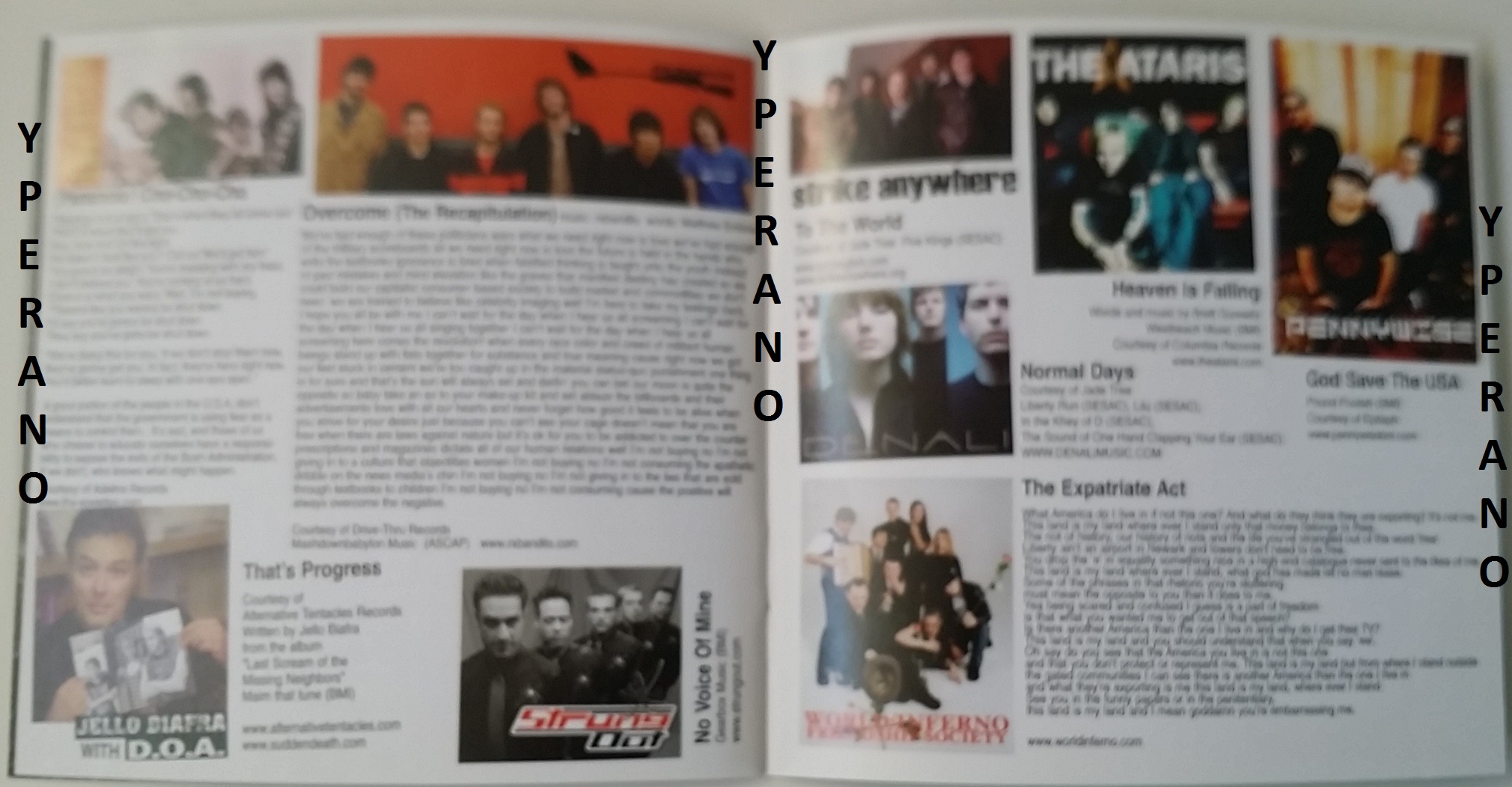 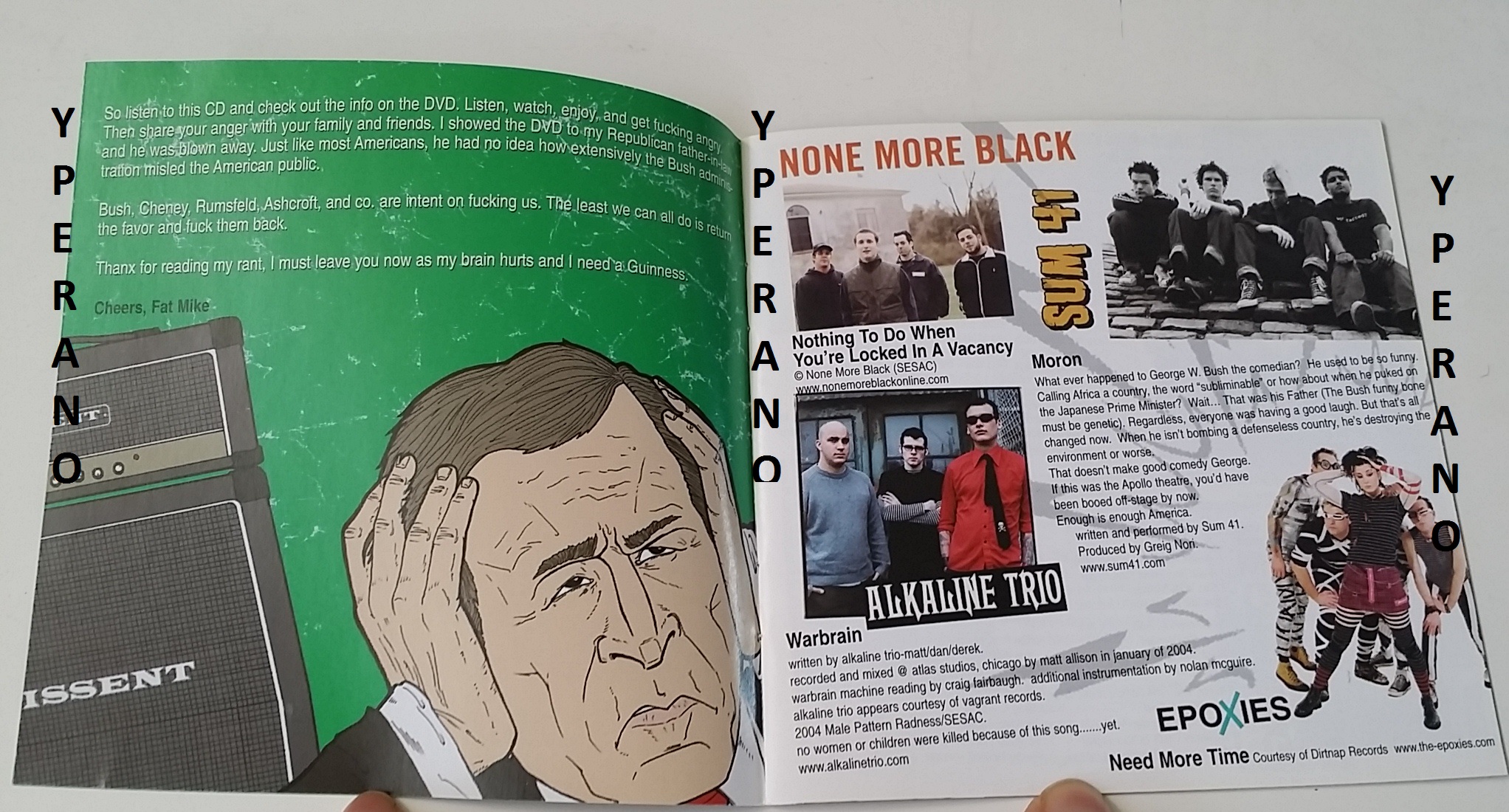 It should come as no surprise that the punk-rock community went to the mat in expressing their displeasure with the 2004 White House administration by releasing the CD/DVD combo ROCK AGAINST BUSH VOL. 1. More than just a 26-track rant against authority, this collection, compiled by Fat Wreck Chords owner/NOFX frontman Fat Mike, brings together a broad range of pop-punk acts whose choice of well-written songs are only superseded by Fat Mikes thoughtful liner notes. Here Mike points out that the purpose of ROCK AGAINST BUSH is not about “being punk rock and hating the government,” but rather “being punk rock and changing the government.”To that end, the roster of acts involved range from the lollipop punk of Sum 41 (“Moron”) and impassioned emo of New Found Glory (“No News Is Good News”) to the righteous rants of Jello Biafra and D.O.A. (“Thats Progress”). Sprinkled throughout the compilation are previously unreleased and rare songs, including the Ataris’ lo-fi reading of Bad Religions “Heaven Is Falling,” a new version of the Offsprings 1991 song “Baghdad” (originally written about the first Bush administration), and Billy Braggs sprightly collaboration with Less Than Jake on their track “The Brightest Bulb Has Burned Out.”

5.0 out of 5 stars Somewhere in Texas, theres a village without its idiot…,
Well this album really is superb. Its full of some of the finest punk bands around (NOFX, Pennywise, Offspring, Less Than Jake, Against Me, to name but a few) and out of the 23 tracks, 18 are previously unreleased, so thankfully its not another compilation album which you find is pointless owning because you already have all the tracks that are on it!
Obviously though, the main reason why this compilation was released was to raise awareness of how bad/stupid/rubbish “President” George Dubya is and how he needs to get out of office and it certainly does that through various mediums – obviously through the mainly political lyrical content of the songs, as well as the extensive sleeve notes by Fat Mike (which includes “20 reasons to hate George Bush Jr.” and “20 more reasons…”), and the brilliant dvd, which includes eye-opening documentaries about the war in iraq and other Bush scandals, such as the election itself. The dvd also has a hilarious stand-up routine mocking George Bush by comedian David Cross and also has music videos from Anti-Flag, Bad Religion, Strike Anywhere and NOFX, which can’t be bad at all!

Now to the actual songs themself. Most types of punk rock are catered for with a nice variety of hardcore (Rise Against), ska (RX Bandits), so-Cal (NOFX, Offspring, Pennywise), pop-punk (Sum 41, New Found Glory) and even acoustic (The Ataris). Naturally, this brings with it a wide scope of bands that is sure to attract a wide variety of fans, from old skool punks who would be attracted to the CD by Social Distortion and Jello Biafra with DOA to younger fans who don’t actually know too much punk but buy the CD because it has Sum 41 and the Offspring on it (and before you go mental, I’m not trying to say that only bratty little 10 year olds who watch MTV all day like these bands!). The good thing about this is that maybe someone might buy the CD because they know theres a new track by a couple of their favourite bands, and then they’ll get introduced to a few new ones who they go on to really like.

The highlights of the album are Sink, Florida, Sink by Against Me! (a band who you MUST check out!), Jaw, Knee, Music by NOFX (as a NOFX enthusiast, I was particularly excited about hearing a new track by them), Baghdad by The Offspring, Sad State Of Affairs by the Descendents, The Brightest Bulb Has Burnt Out by Less Than Jake featuring the legend that is Billy Bragg, and The Ataris’ simple yet really stunning and effective acoustic version of Bad Religions Heaven Is Falling. These are just a few of the great songs, as every single track is brilliant and is completely worth the money.

This really is one of the best compilations out there and is one that has a great political message with it, even if, like me, you’re not American. Its still worthwhile for people outside the USA to know of how bad Bush is as America is such a huge influence on the world in so many ways – both good and bad. Anyway, go and buy this cd right now. You’ll be able to hear some top quality punk that you’ve never heard before and will also be able to reflect on the fact that, as well as all the political scandal and so forth, the fundamental fact is that George Bush Jr is just a general fool who can’t even eat a pretzel without almost choking to death and thinks that Africa is a country.
Go and enjoy – Fat Mike really has done good…

5.0 out of 5 stars changed my life, seriously!,
wow! this is really hot! there are awesome bands wanting to make a difference and their anger at that Bush really makes brilliant music! There are all my favorite bands on it, alkaline trio, anti flag, NOFX, less than jake, pennywise and new found glory so it appealed to me straight away, and it introduced me to bands I now love,
the offspring, rise against and descendents.
the best songs are:
rise against – give it all
less than jake – the brightest bulb has burned out
alkaline trio – warbrain
bagdad – offspring
the dvd is brilliant, music video of bad religion, one of my other faves, the brilliant franco unamerican by nofx and anti flag truncoat, which is my fave anti flag song! the documentaries are a bit boring but maybe cos im too young to understand all that political stuff but the 30 second ones are hilarious.

5.0 out of 5 stars Excellent value,
Seeing this in HMV I was definitely interested.Not especially in the punk bands who mostly sound like the Clash but the whole idea that this was a poke at George Bush.
The title is bang on with a sleeve showing Bush covering his ears up.
With a detailed booklet,bonus DVDs-which take longer to play than the disc itself-you can’t argue.In order to digest all this stuff it would take a month.This is a project which needed to happen and it makes Bush look like the Worlds clown.
Pity no one thought of doing a similar one on Gordon Brown our recent Prime Minister who made Bush look like a Good Guy!!

5.0 out of 5 stars
this is great album if you like punk, rock, hardcore, acoustics, ska … it has it all. also the bonus DVD is great the music videos and the stand up comedy are the highlights. A must buy whether you like Bush or don’t care. 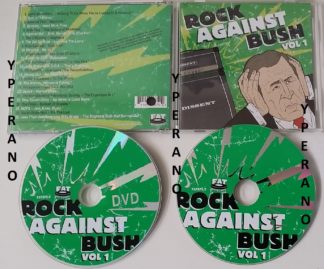