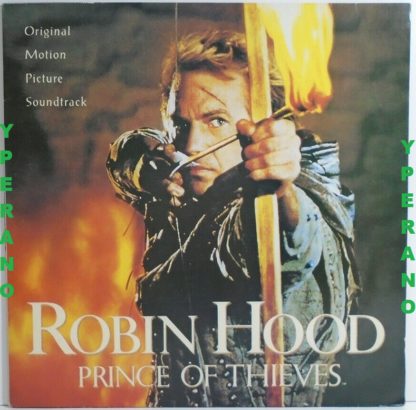 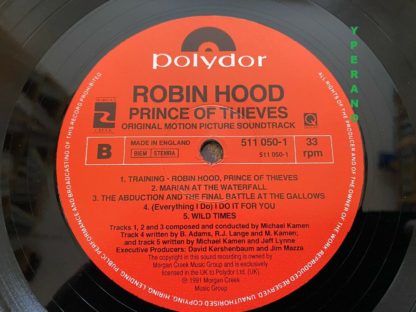 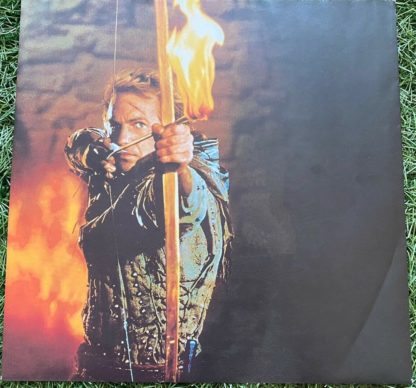 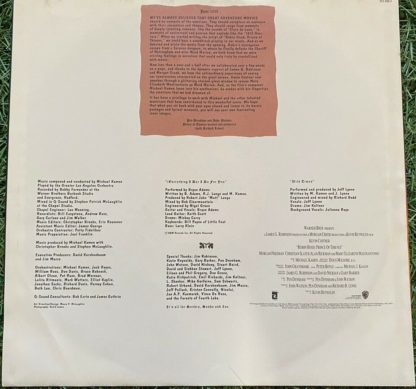 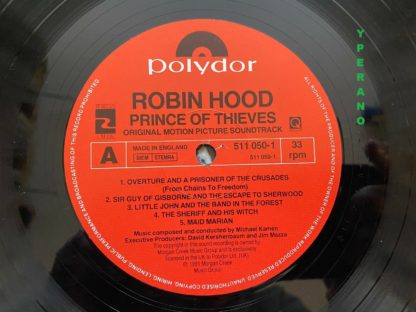 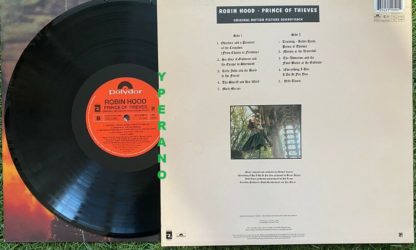 Robin Hood Prince of thieves: original motion picture soundtrack LP. (Everything I Do) I Do It for You Bryan Adams. Check audio

Robin Hood Prince of thieves: original motion picture soundtrack LP. Incl. (Everything I Do) I Do It for You Bryan Adams
The original music score was composed, orchestrated and conducted by Michael Kamen. The main title theme was later used as the logo music for this films co-producing studio, Morgan Creek. The end tag to this theme is currently utilized as the logo music for Walt Disney Studios.
The ending theme, “(Everything I Do) I Do It for You” by Bryan Adams, enjoyed tremendous success staying at the number one position for seven weeks on the U.S. Billboard Hot 100 and 16 weeks on the UK chart, as well as topping the Eurochart Hot 100 Singles and the music charts of over 16 countries worldwide. The song won the Grammy Award for Best Song Written for a Motion Picture, Television or Other Visual Media in 1992. It was also nominated for an Academy Award for Best Original Song in 1991.

Free 7″ (please make sure that you request that, if you don’t it will not be mailed to you) 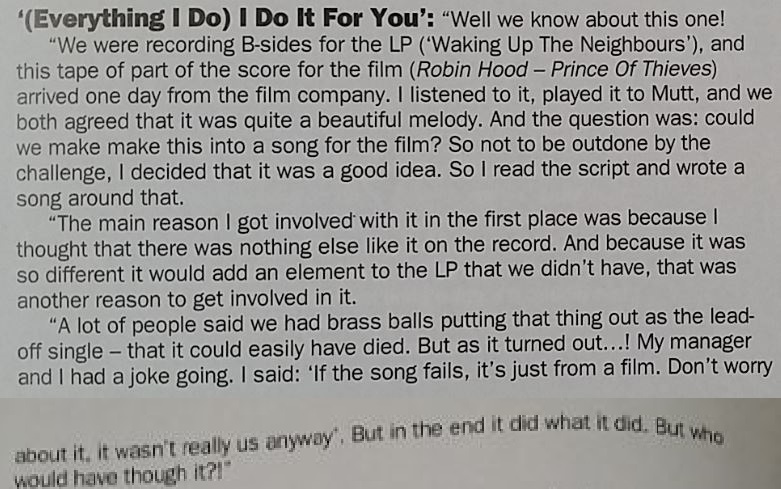 5.0 out of 5 stars All the beauty of the film,
What can I say? I saw the film for the first time about six years ago and it has always been a firm favourite of mine – getting this brought back all the memories of the first time I ever saw it. Highlights are ‘Maid Marian’ ‘Overture and a Prisoner of the Crusades’ and who could ever forget ‘Everything I do (I do it for you)’? As you listen you can picture the action in your mind – from the beginning when we find Robin in the prison during the crusades to his reunion with Duncan to the birth of John littles baby to the wedding of Robin and Marian. Truly this a worthwhile soundtrack befitting any collection and not to be missed!
———————————————–
5.0 out of 5 stars A masterpiece,
I discovered the soundtrack at the same time as when the film came out in 1991 and it has more than survived the passage of time.

The album combines all elements which make up the film as a whole: a sense of the medieval world, the overwhelming presence of nature, the wide open spaces crossing the English countryside, the battles and violence, the harsh existence and the suffering of the times, the moments of tenderness, the banter and companionship, the tensions and the rivalry, the sense of loss (loss of a world which existed before Robin went away to the crusades and the loss of his father and his position), the evil permeating from the deeds of the sheriffs witch and the locals’ superstition, the romance in difficult circumstances, the sense of honour and courage to fight against the oppressors and unfairness. The soundtrack excels on all levels, whether on tracks where the action is very strong or during moments where feelings are understated and expressed via a sublime subtlety.

If you manage to devote your full attention to the album, you could find yourself be carried away to another world and experience a kaleidoscope of emotions.

The fact to this day, the tracks can still evoke the same emotions is testament to its quality. A truly exceptional album which magnifies the action content, the setting and the emotional depth of a great film.
—————————————————-
5.0 out of 5 stars I can’t believe…,
the negative reviews for this score. Its one of the best I’ve ever heard, and the main theme sends chills up and down my spine. Many people must agree or else ESPN wouldn’t repeatedly use the song for dramatic effect. Maybe the songs are “derivative” but I really don’t care, its great music to my ears and to the ears of many others.
————————————————–
5.0 out of 5 stars perfect medieval mood music,
I have used my tape of the soundtrack until I wore it out! It is perfect background music to help establish a “medieval” world for a writer. Additionally, “Everything I do, I do for you” is a hauntingly beautiful love song. If you write historicals, especially medieval England or anytime in Scottish Highlands you NEED this
————————————————–
5.0 out of 5 stars Very emotional music,
When this movie came out, I was blown away by the soundtrack. I absolutely loved the emotion that poured through Michael Kamens work.
I bought the soundtrack and haven’t been disappointed since. Each piece has a decidedly Rennaisance feel to it, from the rescue during the Crusades to the horse-chase between Robin Hood and the Sheriffs cousin.

Even Bryan Adams’ “Everything I Do (I do it for you)” has a catchy sound. Its nice to know that some music producers will leave the long version of the song intact on the soundtrack instead of cutting it. And, to my surprise, I was intrigued by “Wild Times,” the last song on the LP. It has a lilting, haunting sound, and easily fits in with the rest of the music.

The music in this LP is catchy and creates an atmosphere akin to Robin Hoods day. If you close your eyes, you might just imagine yourself right there. 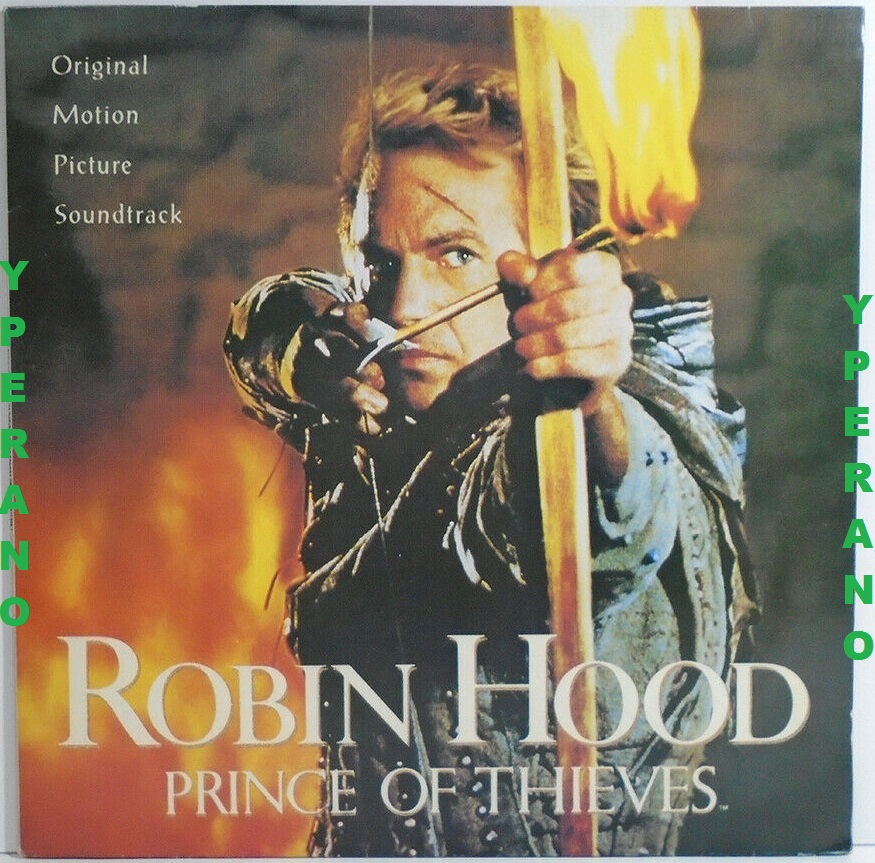 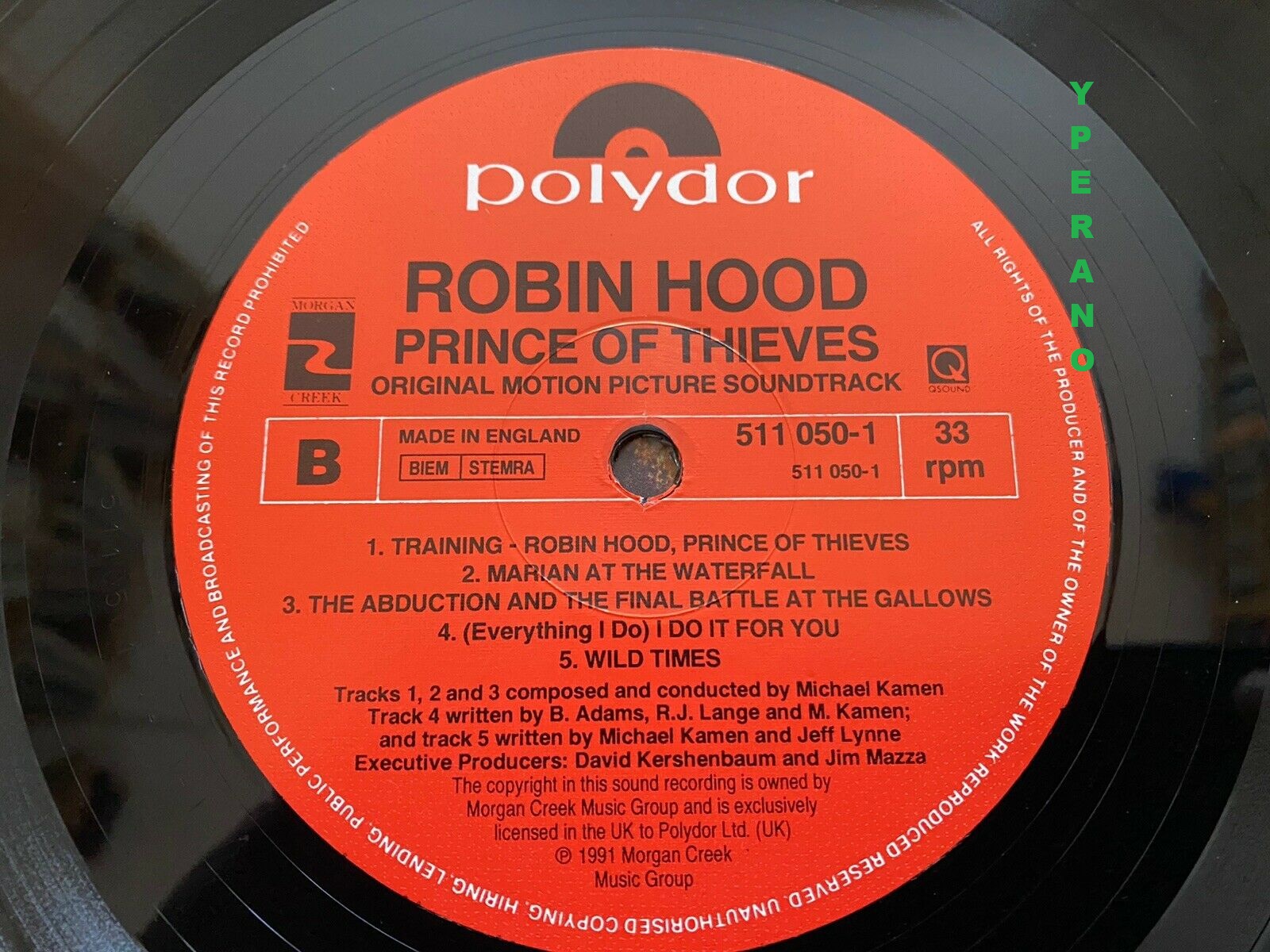 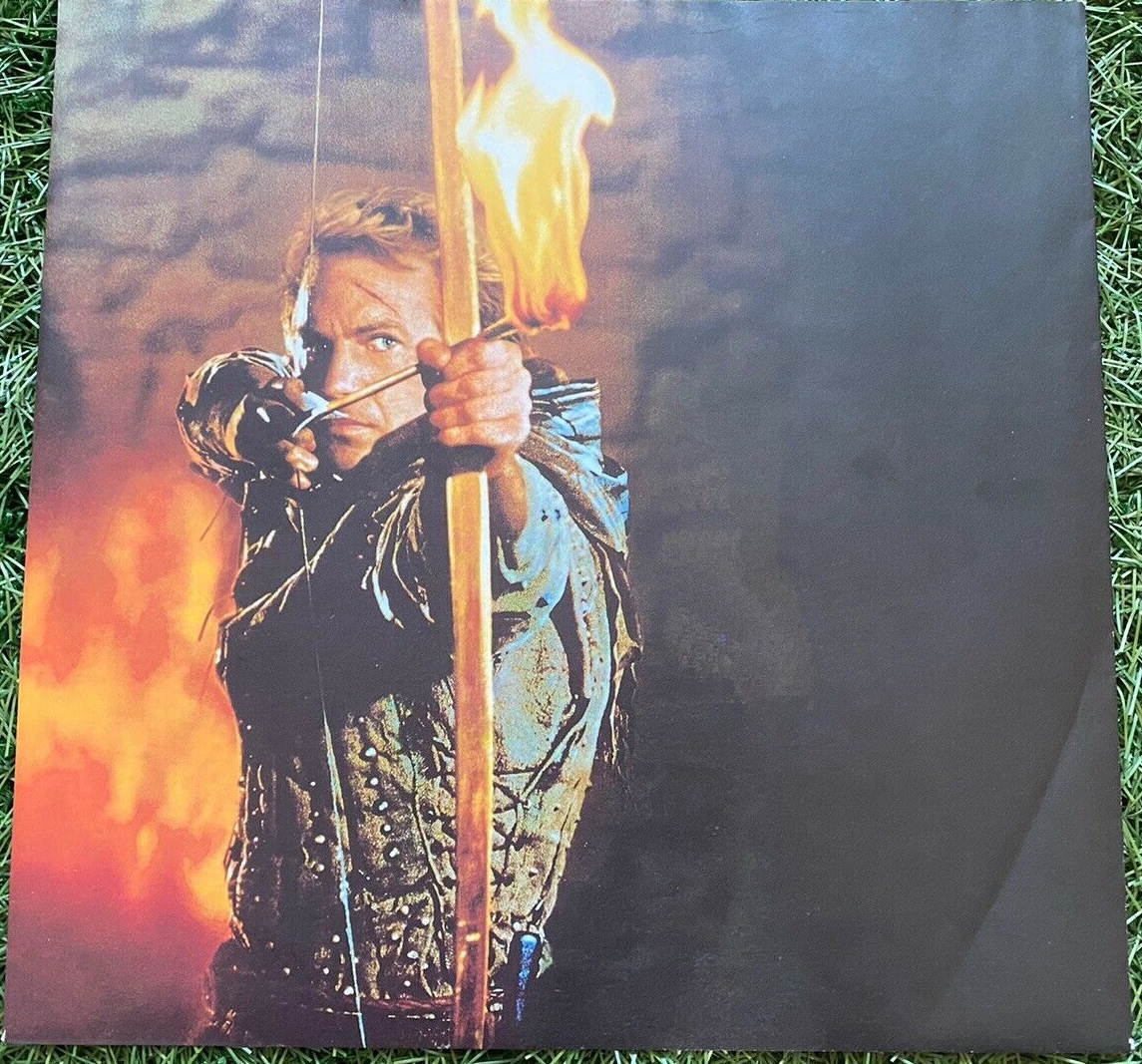 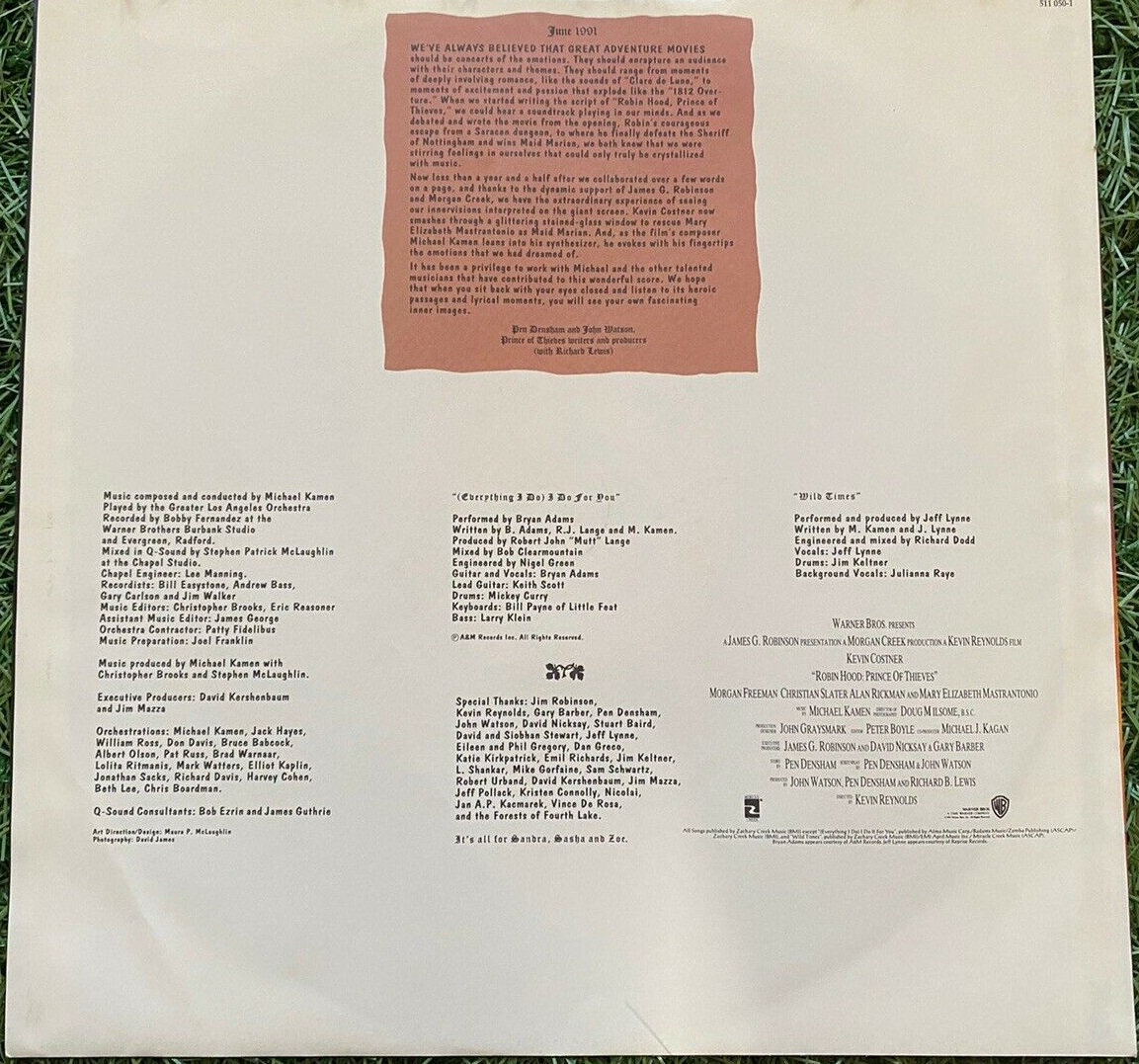 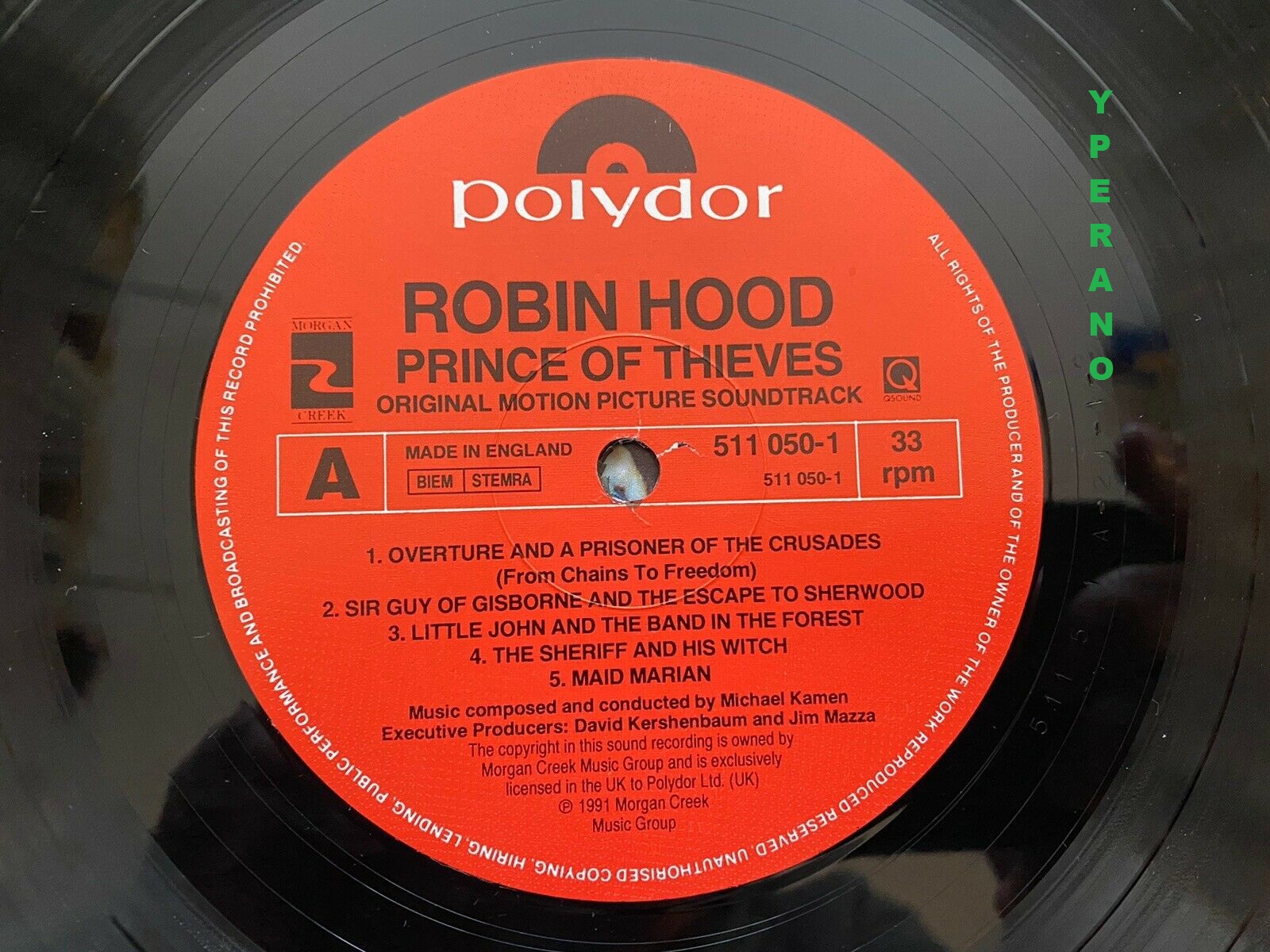 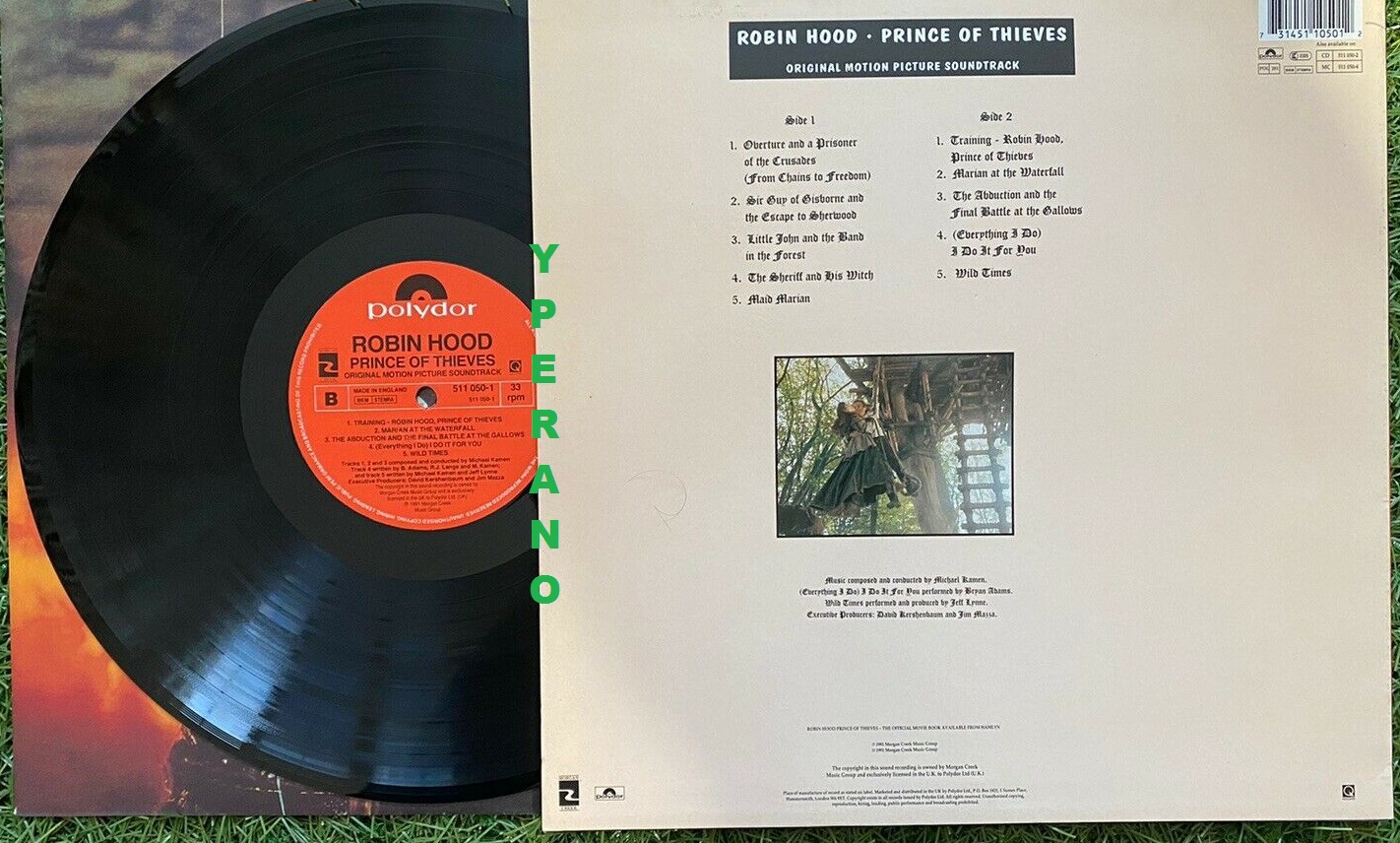 Be the first to review “Robin Hood Prince of thieves: original motion picture soundtrack LP. (Everything I Do) I Do It for You Bryan Adams. Check audio” Cancel reply 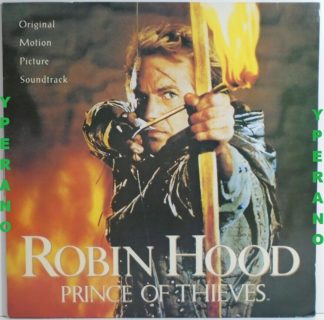 You're viewing: Robin Hood Prince of thieves: original motion picture soundtrack LP. (Everything I Do) I Do It for You Bryan Adams. Check audio £12.99
Add to basket