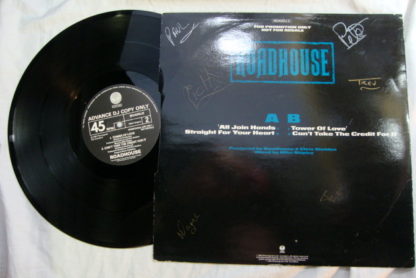 Def Leppard guitarist. Don’t miss the unreleased masterpieces: Straight For Your Heart and Can’t Take The Credit For it. The other 2 tracks are included in the album and are good.

Tracks are produced by Roadhouse & Chris Sheldon. A2 & B2 are non-album bonus tracks.

Roadhouse was a band that included former Def Leppard guitarist Pete Willis. Roadhouse released a self-titled album on 28 August 1991. Several singles were released from the album, with b-sides that are not on the album. The band toured in support of Ian Gillan/No Sweat/Saxon/Two Tribes and recorded four videos for MTV. The single “”Hell Can Wait”” reached number 9 in the uk rock charts, and the album reached n/o 26 in the national charts.

Roadhouse fell apart soon after the release of the debut album. Paul Jackson was initially offered the position as the replacement for Noddy Holder in Slade, but after rehearsing with Dave and the boys for a few months Paul had to leave the band due to bereavements in his family. He formed Smith & Jackson with Jimmy Smith in 1997 and while based in Phoenix, Arizona picked up former Kiss producer/associate Sean Delaney as manager.The band toured with.. LYNYRD SKYNYRD/BLACKHAWK/TOBY KEITH/KEITH URBAN/.ON THE COUNTRY THUNDER TOUR. Following Sean death in 2003 SMITH & JACKSON released their debut album, Rivertown, on RGF Records (RGF/SJCD 057) in 2004. He is currently recording his first solo album in the United Kingdom and the United States.
latest news on PAUL JACKSON is that he is in Nashville usa with his manager BILL AUCOIN of KISS fame.writing with multi hit song writer KOSTAS.
Pete Willis is still in and around the Shefield area. Trevor Brewis is working as a teacher and playing drums for the northeast band the Caffereyes. Wayne Grant has worked with Simply Red and others.