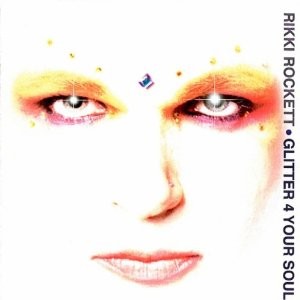 Glitter 4 Your Soul is the debut solo album by Poison drummer Rikki Rockett, released in 2003 (and reissued in 2008). The album features former Poison band member Blues Saraceno on guitars. Poison front man Bret Michaels provides lead vocals for “Tear it Down” and Rikki Rockett himself sings his first lead vocal on “Lifes a Gas.” The rest of the lead vocals are performed by Rikkis friends (other L.A musicians). The album is a tribute to 70s glam rock.

Track listing:
“Action”
“Fame”
“Do You Wanna Touch Me”
“Tear It Down” (featuring Bret Michaels)
“Elected” (featuring John Corabi: ex- Mötley Crüe)
“Trash”
“All The Way To Memphis”
“Rock On”
“Can You Feel It”
“Lifes A Gas” (featuring Rikki on lead vocals)
“Star, Star”

While bandmates Bret Michaels and C.C.DeVille chose the whore-out route, the diminutive drummer grabbed a bunch of his friends and recorded a laid-back cover album paying tribute to the glitter era. And while this was by far the least pretentious Poison side-project, it turned out to also be the best.

In fact, and despite the unfortunate title and artwork, Glitter 4 Your Soul is a listenable and fun collection of glitter-rock covers. Which are not to be mistaken with glam-rock covers, of course; even though the terminology is randomly applied to both genres, glitter rock is actually a much earlier and much more restrictive style, closer to proto-punk than to anything the Sunset Strip ever produced. Consisting of artists like Gary Glitter, T-Rex, The Sweet and a few stragglers from other genres, such as Alice Cooper, the New York Dolls, or even Queen, glitter became famous for its fun-loving, rebellious attitude and penchant for poppy melodies, as well as for a certain laboring of its tracks, which often contained different vocal layers and exotic instruments. All these characteristics carry through to Glitter 4 Your Soul, making it a satisfying, if not entirely flawless, product.

This album is, first and foremost, a gathering of friends. Accompanying Rockett are no less than two of his Poison bandmates Bret Michaels and C.C.DeVille plus Blues Saraceno, also of Poison, and Cliff Calabro, who worked with Bret Michaels on his album Songs Of Life. The only person missing is Bobby Dall, who surprisingly wasnt recruited for bass, a position filled by unknown Chuck Garric. The albums star cameos are completed by John Corabi of Mötley Crüe infamy and Jizzy Pearl, making this something of a glam-rock celebrity roundup.

But as we all know, it doesnt just take a good team you need a good repertoire of moves, too. And fortunately, Glitter 4 Your Soul has more than enough arguments to justify a passmark. Most of these covers work well, and at times the sparks do fly; and while more uninspired moments cannot be avoided (the dreary Fame, the slowly withering Lifes a Gas), they are more than made up for by the peppy interpretations of classics such as All The Way From Memphis, Can You Feel It, or a surprising retelling of the New York Dolls Trash with female vocals, which both intrigues us and makes us long for David Johansen. Other moments are neither here nor there, like Elected, which sees John Corabi do a mean Alice Cooper impersonation, but is so lackluster it would make the Shock King blush. Overall, however, the bill is positive, making Glitter 4 Your Soul a fun, if throwaway, listen. And while, like all cover albums, it is mostly expendable, it beats out Poisons like-minded effort, Poisond!, and may constitute an interesting listen for those less inclined to look for the originals.