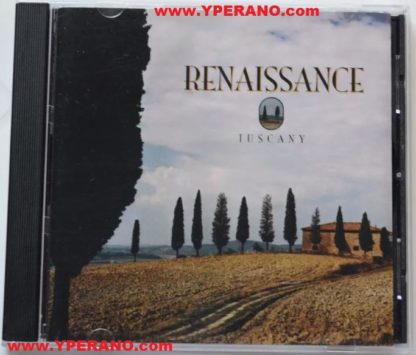 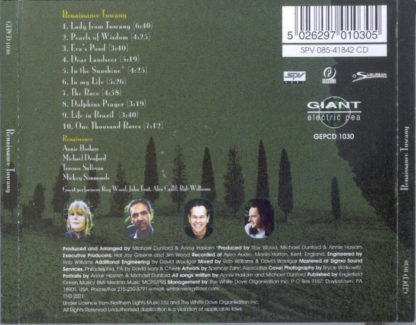 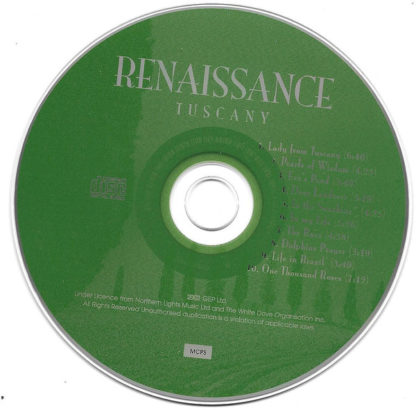 Tuscany is a 2001 album by the English progressive rock band Renaissance. After a lengthy hiatus, original members Annie Haslam, Michael Dunford, Terence Sullivan and John Tout came together to record a new album, assisted by Roy Wood; Tout was unavailable for the later sessions and was replaced by Mickey Simmonds.
Although the album led to one London date on 9 March 2001 followed by a short tour of Japan, with Haslam, Dunford, Sullivan and Simmonds augmented by Rave Tesar (keyboards) and David J. Keyes (bass, vocals), Annie Haslam subsequently announced that the band was again disbanding. 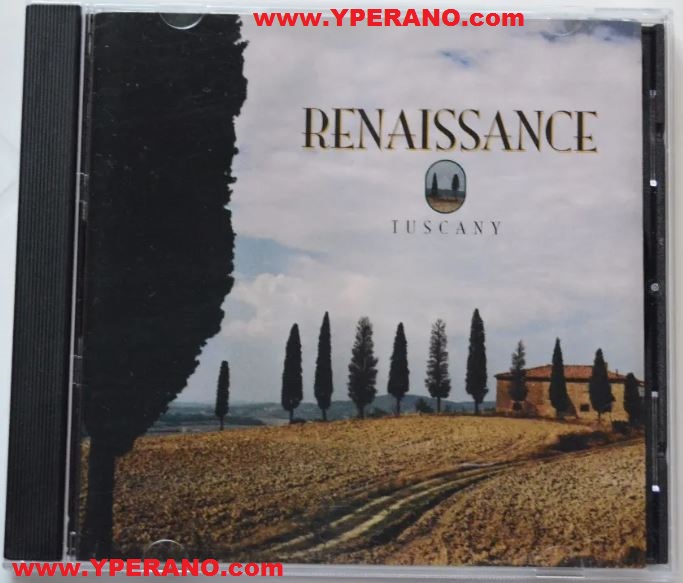 As the twentieth century drew to a close it seemed possible that the elements were in place for a reunion of Renaissance’s classic line-up. A reunion duly occurred but significantly without bassist Jon Camp or lyricist Betty Thatcher-Newsinger. In the event, John Tout was able to participate in only a few of the recording sessions, adding his trademark piano to the keyboard orchestra of new boy Mickey Simmonds. Annie Haslam took on the role of lyricist while Camp was replaced by Alex Caird on bass.
The result, while not exactly a return to form, is still a magnificent achievement, similar in many ways to Yes’s ‘comeback’ album Magnification. While the sound here is clearly identified with the Renaissance of the 1970s, yet it also has moved on: less complex, shorter and fewer instrumental passages, a smoother more dignified sound where the ideas no longer tumble after each other in a rush but build sustainable atmospheres and moods. Economics also play a part as flesh-and-blood orchestras are replaced by a synthetic variety consisting mostly of strings!

Considering some of the poor efforts of the early 1980s, it is a relief to find Michael Dunford has not, after all, lost the ability to write memorable well-crafted tunes that stick in the mind long after the CD has finished. And Annie has contributed some fine lyrics, addressing topics like the plight of beached dolphins [Dolphin’s Prayer], using race-running as a metaphor for a need for acceptance and popularity [The Race], or an open letter to the 18thC painter/sculptor who created the lions in London’s Trafalgar Square [Dear Landseer]. Nothing earth shattering at all but something with a little more meat than the generic adult relationships of several songs.

As in their heyday, songs are written specifically to suit Annie’s voice, using her range and abilities to enhance rather than superficially impress with unnecessary theatrics. She sounds wonderful, as good as she has ever done. Musically they range from simple ballads where Annie is accompanied only by lush keyboard orchestration [Eva’s Pond and Dolphin’s Prayer], to more energetic songs with longer and more developed arrangements [Deer Landseer, One Thousand Roses and especially The Race]. The interest is in detail and dynamic, rather than complexity: a delicious ‘flute’ solo, a sexy trill from Annie, a Mellotron-like string-pad, a jig-like keyboard riff, or a brief section of male harmonies from Roy Wood. These are the things that make this album special.

Taken on merit, Tuscany is a very fine album indeed, clearly tracing its lineage to the great days of the 1970s, yet replacing youthful energy with a sage maturity. The emphasis is less on instrumental dexterity and more on overall quality of performance concentrating on their greatest asset – Annie’s voice. It is perhaps what you might expect them to make after all this time. Sadly, and very frustratingly, the nature of human egos mean Tuscany is likely to be the last original work from Renaissance. If so, then it stands as a fitting epitaph to a great band.
————————————————————
Renaissance to many people mean just one song, the haunting “Northern Lights” but they were much more than just a one song band, with many fans pointing to the album ‘Scheherazade and Other Stories’ as being the highlight of their career. Even though they were living on opposite side of the Atlantic by 1998, Annie Haslam and guitarist Michael Dunford spent time discussing how to promote a stage version of the album. One thing led to another, and drummer Terry Sullivan and keyboard player Jon Tout were encouraged back on board. However, Jon Tout was unable to commit enough time for the project and a replacement was found in the very able Micky Simmonds (Fish etc).
With Roy Wood assisting on bass (I am sure that he and Annie were/are married) a new album has been recorded that captures all of the majesty of the old days. Annie Haslam has a classical voice that many have tried to emulate but few have managed, and while it is her vocals that give the band their unique sound this is very much a joint effort with all of the songs co-written by Annie and Michael. Songs such as “Dolphins Prayer” show what Enya has been trying to do for so long, but has never managed to take it to this level.

Angel fingers and fine singing
There have been a number of attempts over the years to gather together those primarily responsible for the fine music created by Renaissance over the years. These efforts have tended to flounder, and the untimely death of Keith Relf in 1976 means that a reunion of the original line up is clearly not possible. There have however been many fine musicians passing through the ranks, so a gathering of some of the great and the good has always been feasible. The sole constant in such a reunion would be the essential presence of the unique voice of Annie Haslam (although even here, Stephanie Adlington made a decent job of stepping in on a couple of Michael Dunford’s Renaissance albums).

In 1998, Dunford and Haslam met up to discuss the promotion of a musical based on “Scheherazade”. They were subsequently joined by Terry Sullivan and John Tout plus Haslam’s husband Roy Wood (of ELO, The Move, and Wizzard). The original intention was to simply record some bonus tracks for an already planned release, but such was the success of the reunion that they decided to record a brand new album.

Ten songs, all written by Haslam (lyrics) and Dunford (melodies), were recorded and overdubbed over two separate sessions. The first session involved the line up described above, but Wood and Tout were unable to perform on the second, so Mickey Simmons (keyboards) and Alex Caird (bass), neither of whom are former members of Renaissance, were brought in to complete the recordings.

The album is a clear attempt to recapture the majestic sounds of the band’s heyday in the 1970s. The opening “Lady from Tuscany” has all the tenets of that era of Renaissance history, with time changes, punchy keyboard orchestration and the full range of Haslam’s five octave voice. “Pearls of wisdom” features a fine piano arrangement by John Tout, the additional orchestration resulting in a truly majestic piece. Thereafter we have a succession of well produced songs which capture the essence of Renaissance. It would be easy, and indeed churlish, after a single listen to dismiss some of the content as lightweight. To do so though would be to miss the intricacies of the arrangements and the depth of the production. The songs here are brought to full fruition with sensitivity and care.

The album closes with “One thousand roses”, a well constructed number in the true prog tradition of Renaissance. In all then, a fine addition to the band’s discography which at time of writing sees them going out on a high.

“Tuscany” was originally only released in Japan some three years after the project had started, but it did eventually secure a UK release in 2002. The lack of interest by the record companies has meant that despite the quality of this product and the pedigree of the performers, no further releases have come from this fine band since. 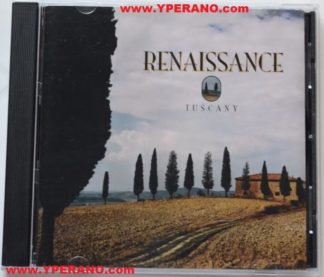