Razor formed in 1984.They have issued many classic metal albums over their 16 year career including Evil Invaders, Violent Restitution, Shotgun Justice and Open Hostility. Toured with the likes of Slayer, Motorhead and Venom all over Europe.
As the name suggests, this album should be played a loud as possible. Along with Annihilator, Razor is one of the Canadian thrash giants. This album is thrash. No doubt about it. Unlike Annihilator, Razor has not strayed far from their roots, and Decibels is the testament to their legacy.
Every song on this album is fast. The guitars sound like chainsaws ripping through anything they touch. Everything about the album is sharp, and thrashy. The solos are still fast, and still awesome. Everything about this album is at light speed. There is no compromise whatsoever. The speed of this album can be compared to that of a machine gun. Reloading is the equivalent of switching tracks. 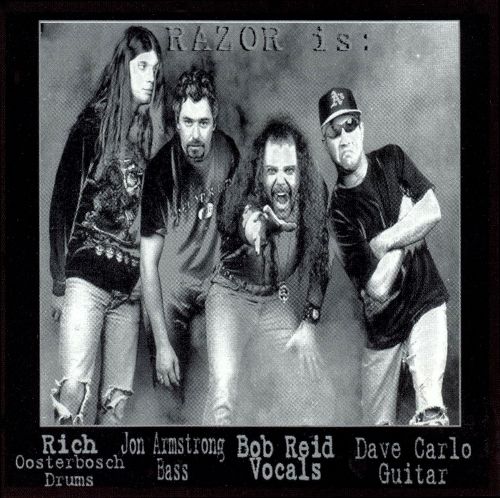 released in 1997, this album sees guitarist Dave Carlo leading his mayhem partners through track after track of damaging thrash that treads the line between old-school and a more modern approach.

Razor albums seem to be far and few between. Razor are thrash metal. Like fellow Canadian Annihilator, these guys continued chugging out quality heavy metal throughout the 80s and even into the 1990s despite the different changes in musical climate, despite the loss of members and despite never gaining the recognition they deserve. “Decibel”s is no exception. This is thrash metal with some very slight industrial metal tinges here and there. “Violence… Gun Control” for instance has an industrial metal edge to it. Also, the vocal effects in few songs has that same edge to it. Other than these minor things, “Decibels” is a full-on, thrash metal, assault. Razors early albums were delivered with a punk delivery but as the band grew, albums began to become more refined and even add in more melody. “Decibels” continues in this direction as well. The songs here manage to be fast and aggressive and melodic at the same time. One noticeable absence here, is that founding member and guitarist Dave Carlo doesn’t let loose on as many shredding guitar solos as I might have expected. Surprisingly however, its not that noticeable. Actually it wasn’t until I started writing a review and began listening for the solos that I noticed the lack of them. So, despite this one minor complaint, I find this to be yet another solid CD.

5.0 out of 5 stars 80s sounding thrash album from 1997,
This album, in my opinion is one of the top four best Razor albums. The other three are Violent Restitution, Shotgun Justice, and Open Hostility. Dave Carlo makes the heaviest and most aggressive riffs on these four albums. His songwriting skills seem to have doubled and the originality is second to almost none. His triplets are very fast. Definitely worth getting this album. Its by far the least expensive of my top four Razor albums.

5.0 out of 5 stars THRASH,
This is some really awesome Thrash. Great vocals, riffs, drums. It came out in the late 90s but it sounds very 80s. if you like thrash or any kind of heavy metal you should definitely buy this totally awesome piece of Thrash. 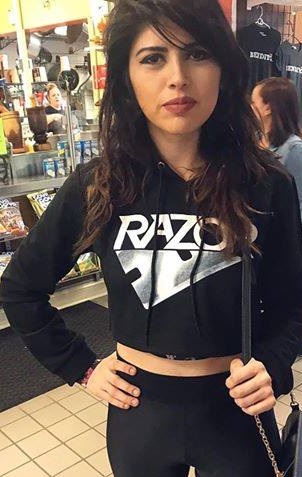 Be the first to review “RAZOR: Decibels CD. Booklet and disc, no back. Hypnotic Records 1997 original CD.” Cancel reply