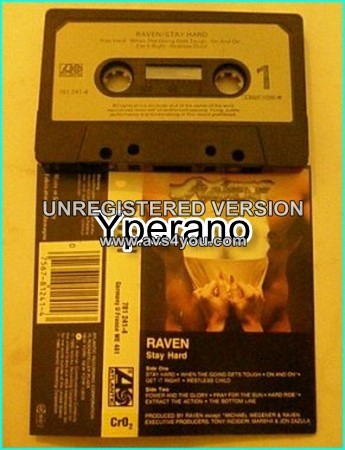 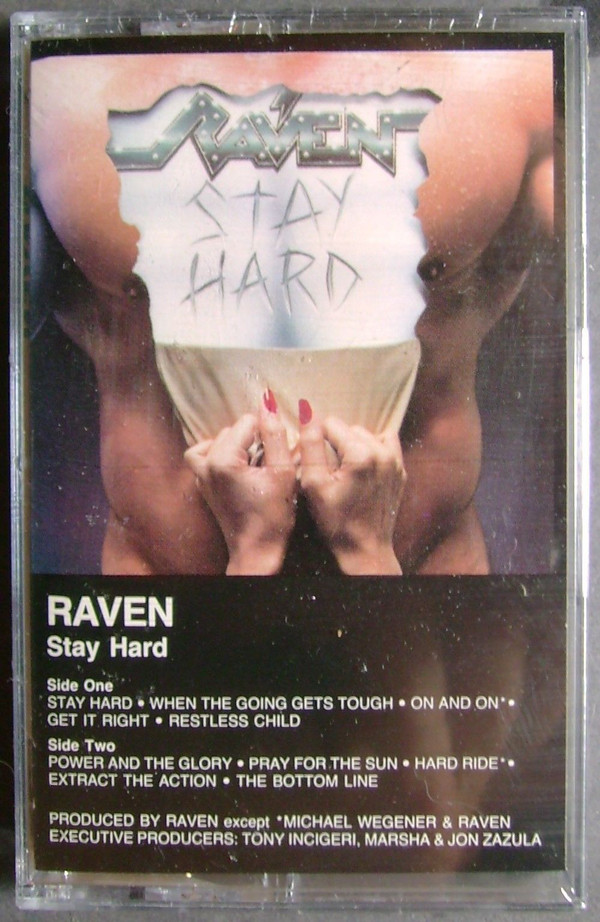 “Stay Hard” was Raven’s major label debut. “Stay Hard” is a transition album, taking Raven into more commercial territory for the first time, yet somehow it still rocks heavy and manages to retain the Raven sound. Much of the commercial appeal has to do with producer Michael Wagener who gives the band a much cleaner sound than their first three studio albums. Those all albums all have a raw, primitive and live feel that isn’t present here. Part of the charm of those early Raven albums was that raw-to-the-bone sound.

“Hard Ride” is a rewritten, re-recorded version of the song off the band’s landmark debut complete with new blazing solos. “Extract the Action” is an excellent and heavy song and definitely one of the highlights of this collection of songs. The instrumental “Bottom Line” is a cool song as well, but includes a horn section, which is quite bizarre for Raven. The title track is a mid-paced hooky anthem. The entire album is actually solid, despite the more commercial feel.

This gem is off their Stay Hard album from 1985.

Stay Hard is the fourth full-length album by the band Raven, released in 1985 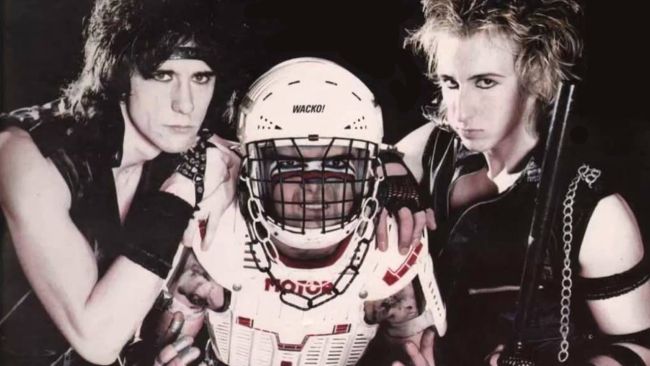 I know exactly how important Raven has been to the development of all things loud, wild and heavy. Raven were one of the pioneers of speed metal, cranking up their used-leather hell-boogie to terminal velocity as far back as their 1980 debut single Don’t Need Your Money. Their first three albums are undisputed classics of the genre, famously influencing/inspiring Metallica and countless others to play harder, get crazier, to take rock n’ roll to the absolute limit. If you don’t have a copy of ROCK UNTIL YOU DROP  in your collection, you can just get the fuck out of here right now!
All knobs to the right, play as fast as you can, and damn the torpedoes. The first two albums, 1981’s Rock Until You Dropand ‘82’s Wiped Out, are pure blister and thrash. They jumped ship from NWOBHM experts Neat records to American upstarts Megaforce for their third, the monolithic All For One album, which slowed the proceedings down to a more manageable tempo but hardened the band’s sound even more. All For One was massively heavy but accessible and catchy, too. Even in 1983, heavy metal’s most significant year, All For One stood out as one of the very best metal albums of the year, up their with Kill ‘Em All and Show No Mercy, easy. 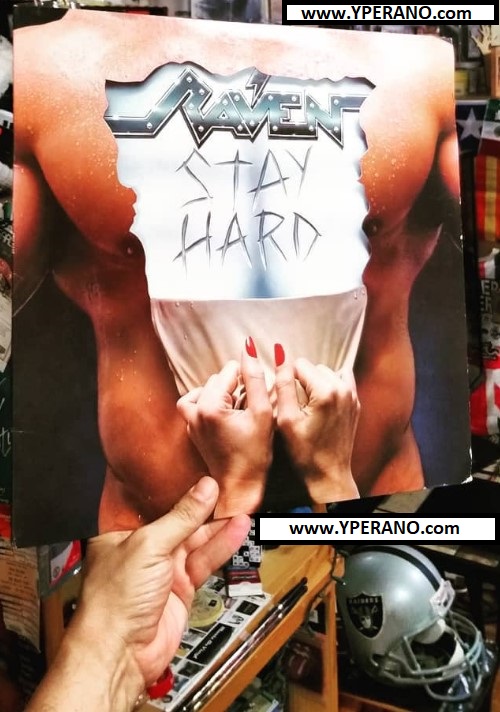 5.0 out of 5 stars It took a few listens, but Stay Hard is an excellent metal lp. Raven is/was a power trio that delivered mostly over-the-top heavy rock ‘n roll with a glut of hooks. Believe it or not, Stay Hard is one of their more subdued records. For a true Raven attack, you gave got to get your hands on Live at the Inferno- its an earth shattering live experience. But what we have at hand is very good indeed. Stay Hard is mostly mid-paced, riff heavy, and drum intensive. The vocals were hard to get used to in the beginning particularly because they are harsh. John Gallagher, who also plays bass, uses his vocal cords to their absolute fullest, belting out any and every kind of growl, snarl, and yelp he can. His style is not really unique as far as 80s metal bands go, but he definitely knows how to do this type of screaming better than most metal front-men. Most songs here reflect classic metal riffery- “Hard Ride”, “On & On”, “When the Going Gets Tough.” Nothing too progressive, just straight forward good hard rockin’. The main riff from “Restless Child” borrows the riff from Rainbows “Starstruck.” I can even hear a similarity to Saxons “Dallas 1PM” in the Raven tune “Power and Glory.” Oh well, let it pass, for the tracks really do rock. The solos on this record cook. I find that Stay Hard is excellent cruising material. The band gives 100% on every track, something you don’t normally hear from an established rock unit.

5.0 out of 5 stars Raven – Stay Hard – Stay Metal
Stay Hard is my pick for favorite Raven album. And yes the albums before including Rock Until You Drop and Wiped Out are awesome as well. Their return album Walk Through Fire is great as well. But Stay Hard is my favorite. Some cheesy lyrics for sure, but the single On And On, Extract The Action, Stay Hard and probably my favorite song Get It Right are great songs. This was their first on Atlantic records which meant better recording. Buy this album and hear more of the incredible musician brothers John and Mark Gallagher.

5.0 out of 5 stars STAY HARD is the heaviest! Z rock in 1986 introduced me to them, very high energy metal with that tenacious Irish bite! worth every penny! 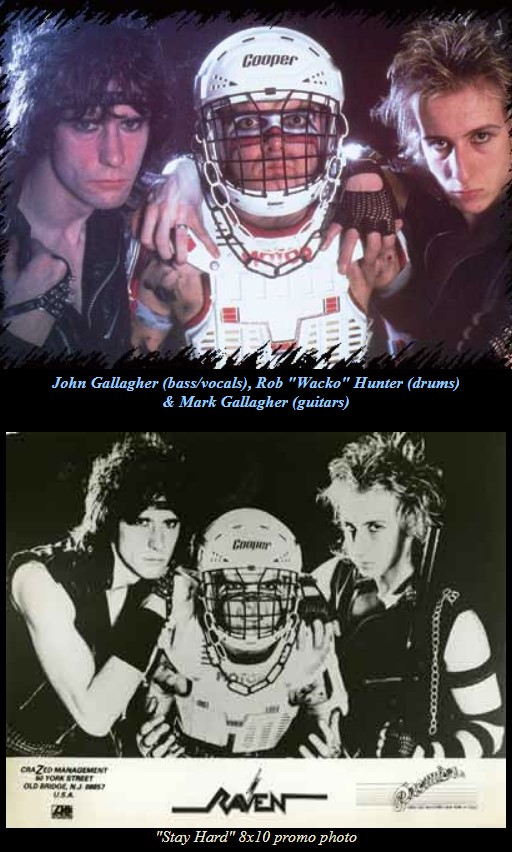 Kicking out in ’85, this album was a marked change for Raven, and some would say for the worse, but I’d disagree as the music on here alone speaks for its self. Now you can tell that Raven had changed quite a bit since unleashing Rock Till You Drop 4 years earlier, and they were definitely hungry for that elusive popular acceptance, and break (and seeing it as a very real possibility), but even with this album taking a much more marketable sound, and mainstreamed feel Raven still didn’t let up as far as musical creativity, and song writing talent goes. Actually, everything these guys did, no matter how mainstreamed was always totally Raven, and really that’s what I love about this album so much. These guys had they’re own schtick, they had they’re own sound, and they, regardless of all else, had some real fucking talent. Anything else is purely subjective.

The guitar riffs are a bit all over, but stick to a particularly Raven esque sound. A heavy reliance on quick chorded rhythms, done in a NWOBHM fashion, but with an amped up Speed Metalish feel, and classic anthem type Heavy Metal chorus’. They stick to a fairly genre typical song structure, but accent it nicely with each members unique characteristics of sound. The guitar tone is nothing short of killer (probably one of my favorites Raven ever had) and really helps drive the riffs onward. Also, there is a plentiful supply of leads, and solo’s on here some of which are pretty impressive. Raven always delivered as far as riffs were concerned, and this album also showed a bit more variety than their previous efforts, but only in a more mainstreamed type way (check out “Pray For The Sun”, and “Get It Right”).

The vocals mix certain tones of the singers ability, from a some what normal kinda voice to that seemingly now forgotten 80’s high toned wail, the singer totally ingrains that fighting 80’s youthful spirit of anger and all out partying. Dropping all humorous aspects of the lyrical content aside, which is fairly obvious “Stay Hard, Stay Wet” amongst others (also the cover, showing what appears to be a man with a woman going down on him), you can really get a feel of the times in the simplistic yet strongly original words. The chorus arrangements are very catchy and in a very traditional rock based way (great bridges also, check out “On and On” for an awesome bridge chorus structure).

Overall, this album rocks. Even with its highly mainstreamed feel (Raven would soon go a bit too far in this direction on “The Pack Is Back”, though), and pop appeal this album still packs enough killer, and less filler to warrant my praise. These guys had more individuality than countless others, and more talent, and drive too boot. Get this if you are a fan of the band, or style. 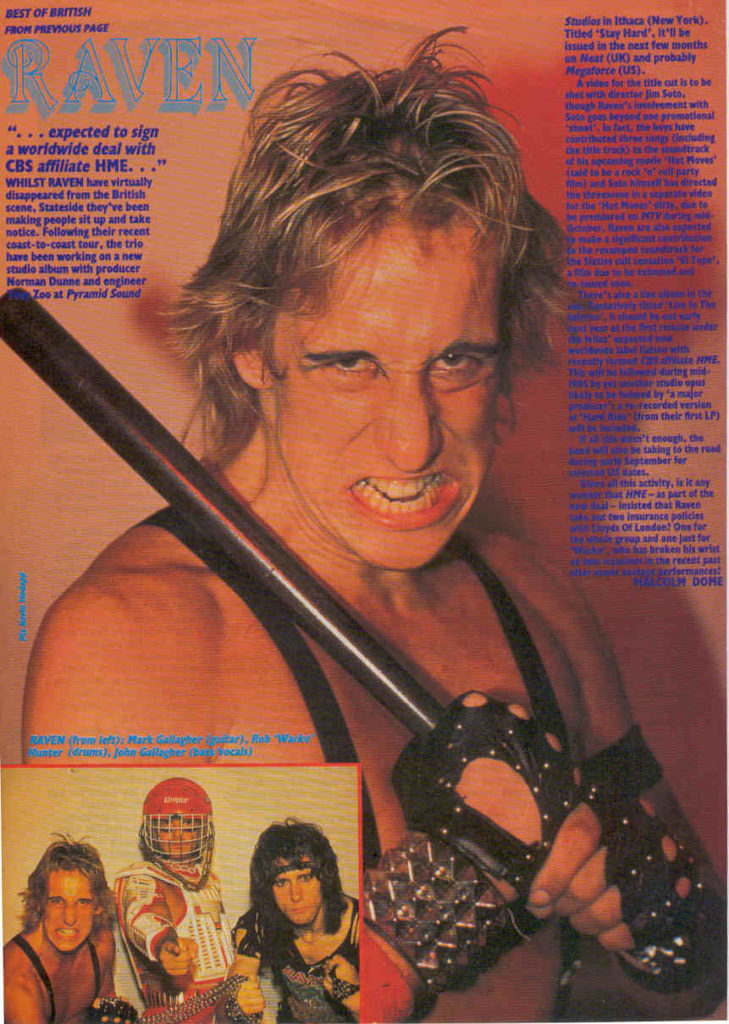 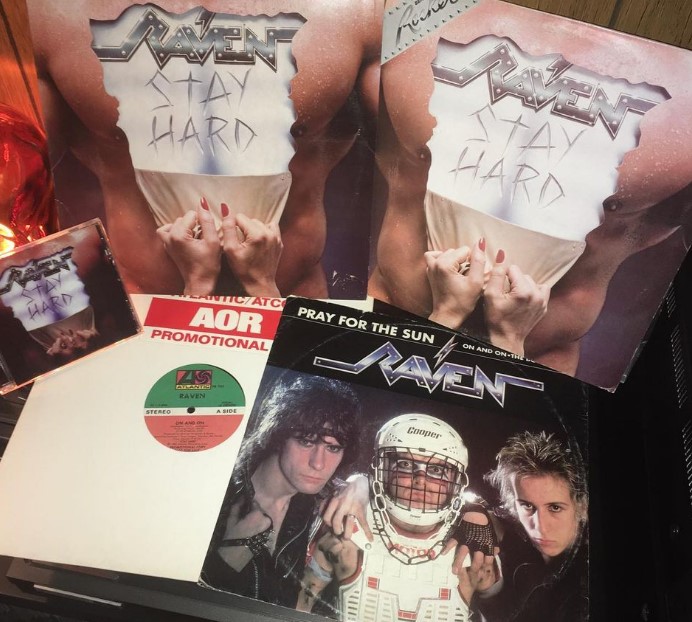 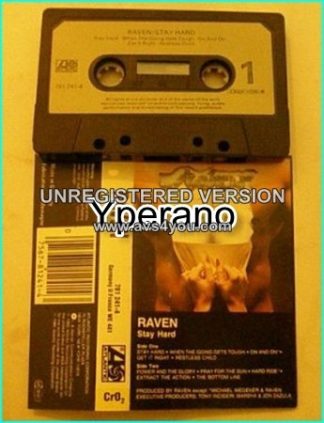