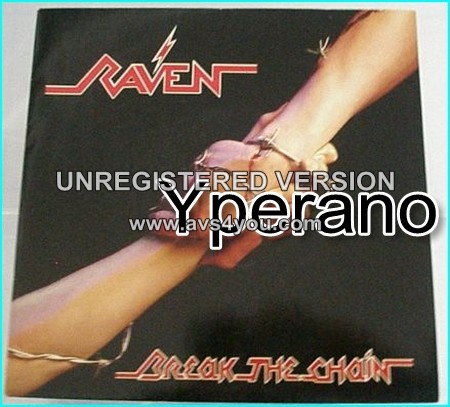 RAVEN: Break the chain 7″ + The Ballad of Marshall Stack (fantastic B side) N.W.O.B.H.M. . HIGHLY RECOMMENDED

Being one of the flagships of the first wave of the NWOBHM, UKs RAVEN had started out as early as in 1974 already and developed a style that would lay down the first stepping stones for what a few years later morphed into Speed Metal (the lads called it Athletic Rock, haha). Its not so much the speed of the drumming but rather the hectic singing and the wild guitar work. Theres really a whole lot going on in the background, if you follow the guitars. Quite a novelty for a 1980 Metal band!

Raven…a guilty pleasure…the first song on this 7″ Break The Chains is an all time favorite of mine, but if this is one of my favorite Raven songs. Mark Gallgher had the most unique guitar sound and playing since Randy Rhoads and Eddie Van Halen. I don’t know of too many guitar players hat can create their own signature sound!
IF, and only IF Metallica had not released Kill ‘Em All, or maybe NOT for another year, then Raven would have been more famous than they are right now. Underground metal was busting out all over the world, and many of us into Motley Crue,Maiden, Priest, etc were hungry and looking for more.
It just plain sucks that Raven who have been around as long as Iron Maiden do not get the respect they deserve.

Raven is a heavy metal band associated with the New Wave of British Heavy Metal, that formed in 1975. They had a hit with the single “On and On”, and refer to their music as “Athletic Rock.”
Formed in Newcastle, England by brothers John and Mark Gallagher, Raven quickly set the pace for the burgeoning metal renaissance in the UK at the time. Raven began creating a sound which was rooted in British hard rock with progressive tendencies and a willingness to take musical chances . The bands highly energized live show and interaction between members developed an image and style of play the band described as “athletic”. They began wearing guards, helmets and plates from various sports (hockey, baseball,etc…) and incorporating them into the playing of their instruments (for instance, elbow pads were used to strike cymbals for a unique performance angle). Eventually, the band signed with Neat Records, the legendary, low-budget metal label of the Northlands, releasing Wiped Out and Rock Until You Drop within a years time and making an impressive showing on the UK charts a the time. Sufficient noise was made for the American market to take notice and New Jerseys Megaforce Records signed them, issuing their next recording in the States as All for One. The band came stateside in 1983 and toured extensively with Megaforce bands Metallica and Anthrax, both of whom would gain a place of prominence in the growing thrash metal movement. Manager/Megaforce founder Johnny Zazula believed that Raven were major label material and kept them touring constantly until the big labels noticed. The infamous Live at the Inferno recording was a product of one of those tours. Atlantic Records signed Raven to a worldwide contract after a minor bidding war (major label contracts would follow for Metallica and Anthrax in the following year). The band moved its permanent base from Newcastle to New York.

Be the first to review “RAVEN: Break the chain 7″ + The Ballad of Marshall Stack (fantastic B side) N.W.O.B.H.M. . HIGHLY RECOMMENDED” Cancel reply 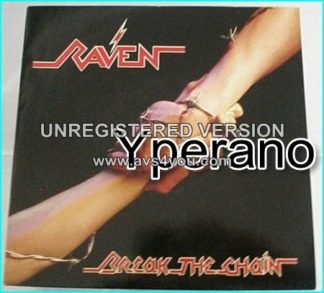 You're viewing: RAVEN: Break the chain 7″ + The Ballad of Marshall Stack (fantastic B side) N.W.O.B.H.M. . HIGHLY RECOMMENDED £6.66
Add to basket