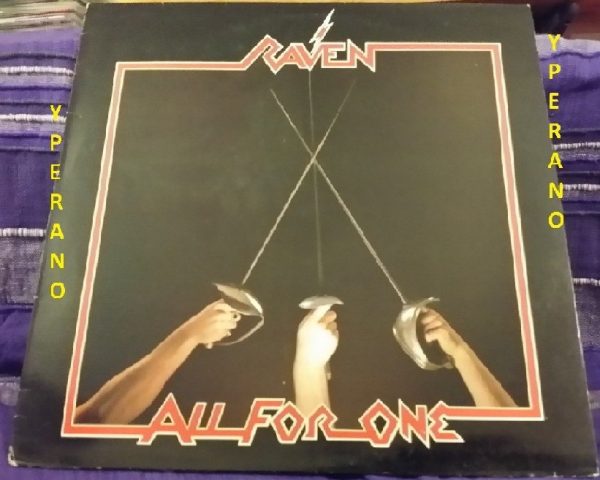 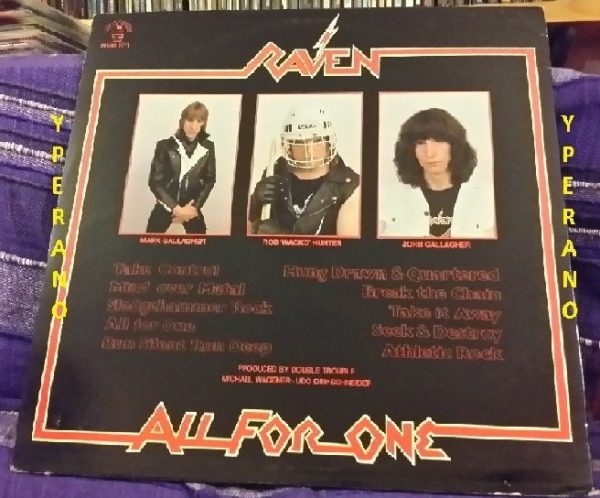 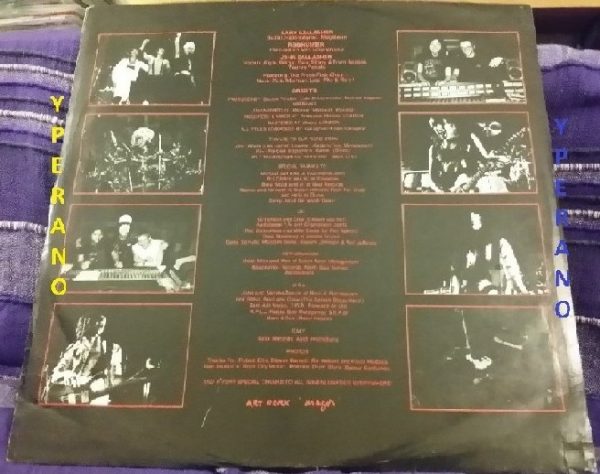 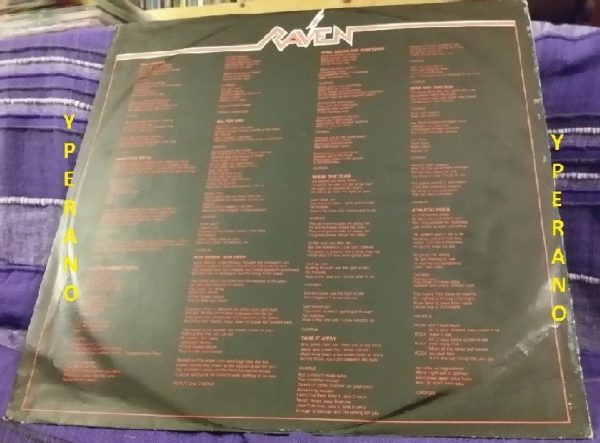 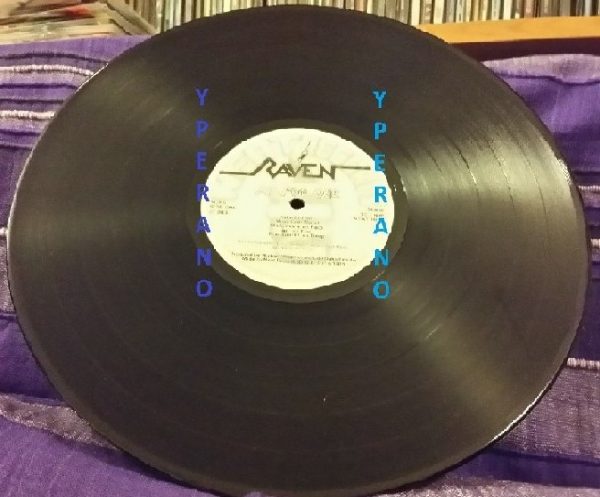 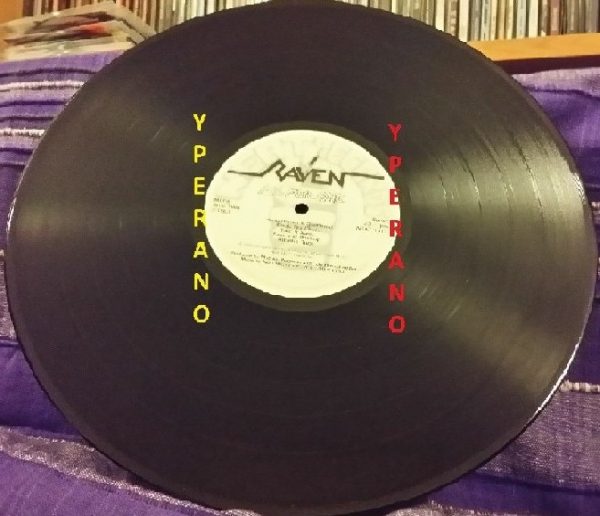 RAVEN: All For One LP. Neat Records, with impressive inner. Check samples

Athletic rock, masterpiece of metal! – 100%
Such a NWOBHM classic by one of the best English metal bands. John and Mark Gallagher featuring the incredible Rob Wacko Hunter sign a masterpiece. Raven has always had an underground sound, all those screams and lyrics and the agressive and raw style define theirselves. “All For One” is probably the album with which they reached the definitive success. From the first song to the last, the record is an awesome display of true anger, power and virtuosity. Its an unquestionable masterpiece of metal, which contributed to the consolidation of the NWOBHM.

“Take Control”, the classic “Mind Over Metal” or the amazing “Run Silent, Run Deep” are the proof that Raven were on their best moment in their career. The vocals are great, the solos just rock and every track on the album is awesome. Raven is one of the most agressive, powerful bands you can listen to, and “All For One” will always remain as an all-time metal classic.
The sound form the two first albums evolutioned to a more intense metal, and I don’t think anyone could discuss the relevance of this album. It also contributed to the consolidation of speed and thrash metal, along with the albums of bands like Exciter or Accept.

Metallica went on tour in 1983 with Raven, and its specially awesome the Ep that they released with Udo Dirkschneider. The remastered version includes the “Born To Be Wild 7” ” single, which remains as an excellent performance of the classic by Steppenwolf.

Live The Metal Code – 96%
Recorded in London in 1983, and produced by Udo Dirkschneider of Accept, this was a major record for Raven. They had previously with their first two albums, and touring, solidified a strong fan base (doing tours with bands like Girlschool, and gigs with bands like (then) “young metal attack Metallica”) which formatively uped the stakes so to say, or better put, it gave the band the ego boost they needed to move into the sound they were slowly growing into, and a hope of really cashing in one day as far as sales are concerned.

I’d argue that this is a turning point for Raven. The first two albums were total NWOBHM, with out a doubt, but this album really shows what the band was going to be turning into on future albums like Stay Hard, and Lifes A Bitch, a more progressed sound with a more mainstreamed feel, but it still does have those NWOBHM leanings in its sound at points. Good or bad, this is a turning point, and this album gave Raven the opportunity for a major record label release (well their legendary live shows had a bit to do with that also).

Musically the bands really tight, and totally doing what only they did. Non-stop catchy rythms coated in high end vocal wails, shreding leads, and solos, and an attitude thats undeneibly metal. There are alot of total old school heavy metal riffs on here, but in alot of ways at the base of their music, Raven has always been a progressive hard rock band on speed, and playing at 11. Also, there is no lack for talent on this record. All the musicians are fully competent, overly energetic, and highly creative. These guys put alot into these songs, and its apparent. You wont find an album quite like this.

The production values are limitless, this is classic heavy metal with a sound unique to its time. Everything, from the vocals, to the drums, to the guitars has been masterly produced to hold a sound that is extinct. I highly recomend this album to anyone interested in classic 80s metal.

RAVENs third studio release, by many considered their best moment, before they were signed to Atlantic Records and, pushed hard for obtaining commercial success and expressive sales in the US, made one of the most amazing sell outs in metal history, releasing the “abominations” STAY HARD and THE PACK IS BACK, and burying whatever chances they ever had of really making it big…

ALL FOR ONE is in-your-face metal. Hard. Vicious. Deadly. John Gallaghers mesmerizingly gutted vocals were never better than here, while his brother Mark Gallagher handles all the six strings alone, displaying great skill. The tracks are all killers, and the album has a better production than their first two albums, ROCK UNTIL YOU DROP and WIPED OUT, both of them, along with ALL FOR ONE, considered absolute classics of the New Wave Of British Heavy Metal.

5.0 out of 5 stars Classic headbanging metal,
RAVEN were way ahead of their time – and this CD goes to prove it many times over. Raven came out in a time when metal was going through a rather slow grind kinda boring are we going to have to listen to Ted Nugent or something like him for the rest of our lives’ stage – and they were a major WAKE UP CALL!
This is full of classics, from the opener ‘Take Control’, to the anthemic ‘All for one’, straight to the guts and wrench of ‘Hung, drawn and Quartered’. Unfortunately, it appears that Ravens peak was before its time (early-mid 80s), as many thrash bands came out only a few years later.

Bottom line – a true metal/thrash fan can really enjoy this nearly 20 year old classic today in all its digital glory! It does sound somewhat dated (the same way that early Metallica does), however you can catch the intensity of this band in their prime today!

5.0 out of 5 stars More Of The Same, But Louder!,
Raven was signed because of this records sales, I believe, in the mid- 80s. Atlantic took them and cleaned them up a bit and put out “Back For The Attack”, then “Stay Hard”, and more followed, but none sustained the Crash, Bang, Wollop! that “All For One” had. Previous records on the ‘Neat’ label gave a more ‘live’ representation of the band. But, when producer/vocalist Udo Dirkschneider got ahold of them he added a powerful punch and a fun studio vibe to their music that I’ve not heard since. I’ve waited for this album to be on CD since it came out in ’85? I think. Its just tons of reverb on the drums (and the entire mix), tons of chorus on the guitars, tons of screaming banshee-like vocals that’d make David Lee Roth blush, that combine to make one of my favorite underground metal albums of the 80s- of all time, for that matter. Unique. ENJOY LOUDLY!!

5.0 out of 5 stars mag,
Quintissential listening for any headbanger from the heyday of hard and heavy METAL music. I own one of the original issues on cassette and wore it out. “Hung Drawn and Quartered” , “Run Silent, Run Deep” live and breath the same fury now that they did when they were first released. I also had a chance to see them live after they signed to Atlantic, and despite the weaker releases, was still blown away like a Sledgehammer to the head!

5.0 out of 5 stars Metal at its best,
Whilst this album is over 20 years old now its still fresh. Fantastic guitaring with powerful riffs. Best tracks are ‘Hung, drawn and quartered”, “Mind over Metal” and “Sledgehammer Rock”. Buy it, you won’t regret it.

5.0 out of 5 stars Pure INTENSITY!!!!!,
This album is one of the best heavy metal records ever. Every song on here is very fast, loud, & aggressive. There are NO pop-oriented songs on here at all, not even the “Ballad” (which isn’t really a ballad at all.) This is a _good_ thing! The lyrics are totally clichéd hammers-and-swords-and-rock’n’roll power metal fare, which is also a good thing! 😉 Mark Gallaghers guitar solos & riffs are very skilful. Singer/bassist John Gallagher has an awesome vocal range, alternately growling & shrieking all the way from the albums beginning until the end. The albums best songs are “Inquisitor” & the cover of Steppenwolfs “Born To Be Wild,” on both of which John duets with Udo Dirkschneider from another power/thrash metal band, Accept! (Udo is one of the few singers whos actually better than John Gallagher, BTW.) Their singing on Steppenwolf cover is simply amazing, they both shriek at the top of their voices all the way through! Fans of power metal & thrash metal will almost certainly enjoy this.

5.0 out of 5 stars One of the best, It is one of the best albums from the era, and still holds its own today. It was to bad what Atlantic did to them. A great band brought down because of corporate greed.

5.0 out of 5 stars One of the best Metal Bands of the 80s.,
Heavy all the way through. Guitar riffs that rock. Songs that scream. Maybe old, but still worth buying now.

5.0 out of 5 stars Seek And Destroy,
Ravens third album and probably their best . Run Silent Run Deep , Take It Away , the opening track Take Control , the awesome Seek and Destroy ( not to be confused with the Metallica song of the same name ) and the classic Hung Drawn and Quartered . This is the album preceding Stay Hard , where the band took a turn toward a more commercial ( yuck ) sound.
I can’t understand why they don’t re- release this on Cd, its such a great album form a great band.