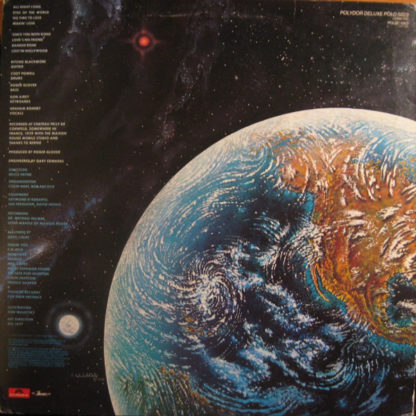 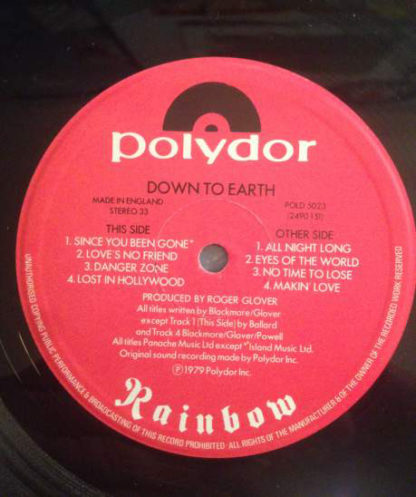 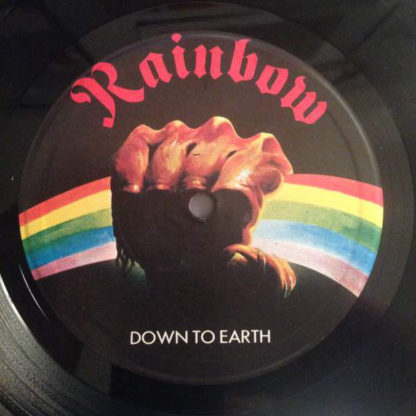 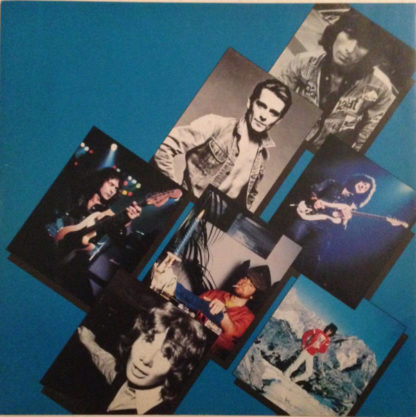 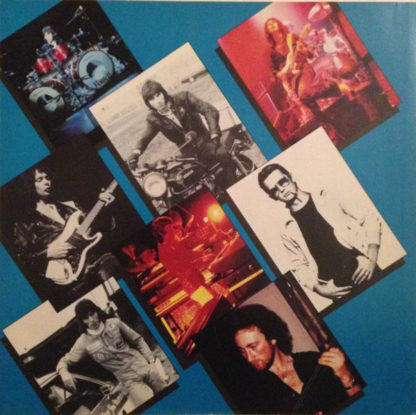 RAINBOW: Down To Earth LP 1979 UK England original first edition. Check videos and audio “All Night Long”, “Eyes Of The World”, “Since You Been Gone”, “Lost In Hollywood”+ turntable audio!

Blackmore always played smart, and never more so than with his brilliant reinvention of Rainbow in the late 70s. Deciding that Dio’s demons-and-wizards shtick was passé, Blackmore replaced him with Graham Bonnet, whose quiff and Hawaiian shirts didn’t sit well with Rainbow’s denim-and-leather demographic but he was ideally suited to the radio-friendly rock of Down To Earth.

With former Purple bassist Roger Glover joining the band and producing the album, Rainbow had Top 10 hits with Since You Been Gone and All Night Long, while Eyes Of The World maintained a link to the past.

With the departure of Ronnie James Dio from Rainbow in 1978, guitarist Richie Blackmore could have easily sought a Dio clone and continued the group recognizable sound. He instead brought Graham Bonnet aboard, a dramatic belter with a completely different style. Blackmore would also recruit former Deep Purple mate Roger Glover on bass and the talented Don Airey on keyboards. The band sound went from sword-and-sorcery epics to more straight-ahead rock.  “All Night Long” is one of the more popular tunes, a track on which Bonnet makes his powerful presence immediately felt. Another equally accessible and handclap-filled effort is “”Since You’ve Been Gone.”” Both songs received FM airplay and charted the commercial course that later albums would take. Don Airey keyboards provide a haunting intro to “”Eyes of the World”. “No Time to Lose”” is a ’50s R&B number with a harder edge. Bonnet sings the blues on the downtrodden “”Love No Friend.”” Premier skinsman Cozy Powell shuffle boosts “”Lost in Hollywood.”” DOWN TO EARTH is tight all around, and shows the band ability to progress. An excellent hard-rock album. 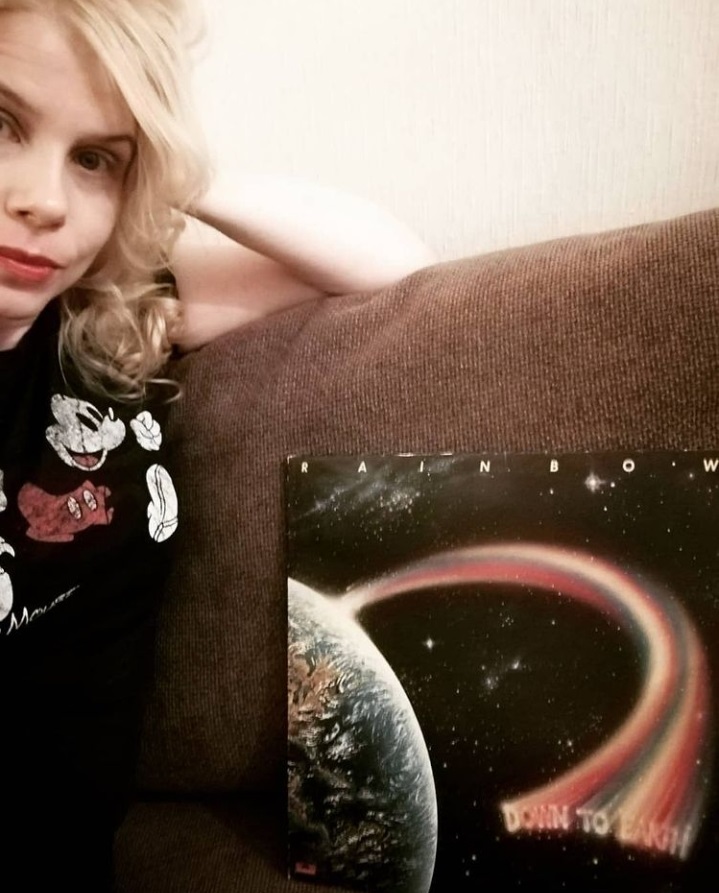 Down to Earth is the fourth studio album by the British hard rock band Rainbow. It is their last album to feature drummer Cozy Powell and their only album with vocalist Graham Bonnet. Released in 1979, it contains Rainbow’s first hit single “Since You Been Gone”, marking a more commercial direction of the band’s sound. 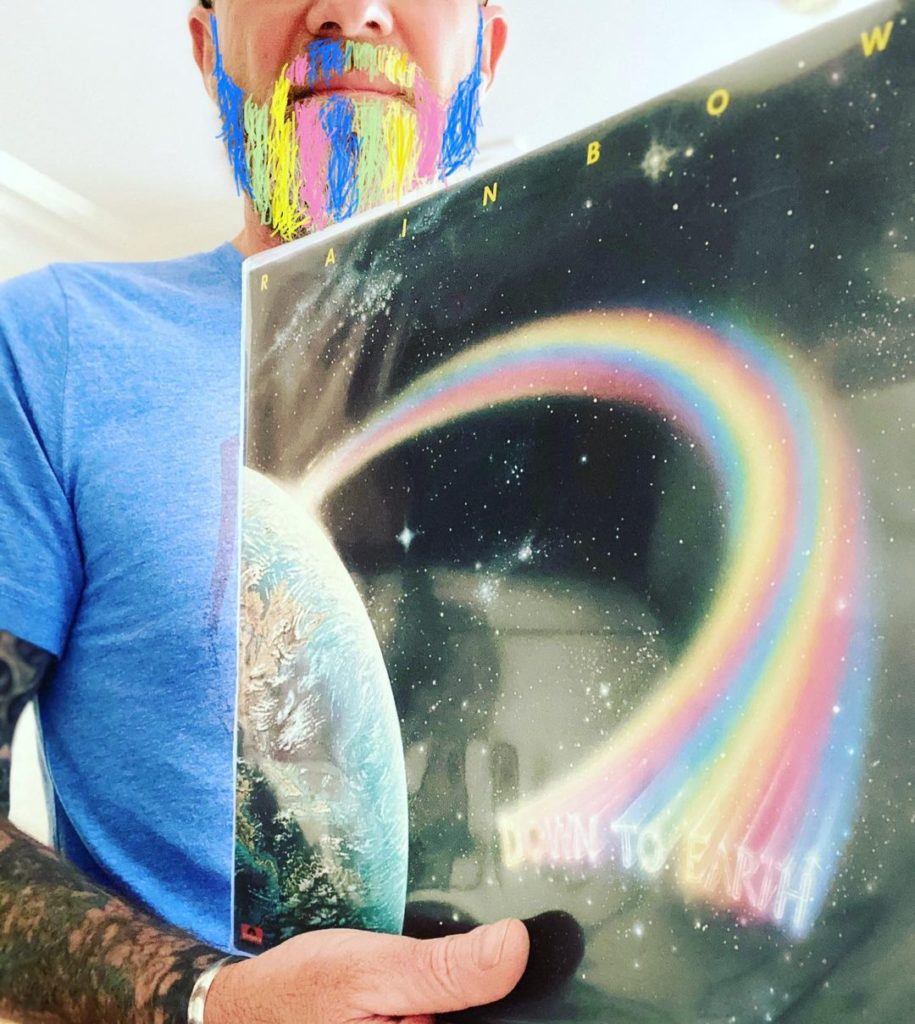 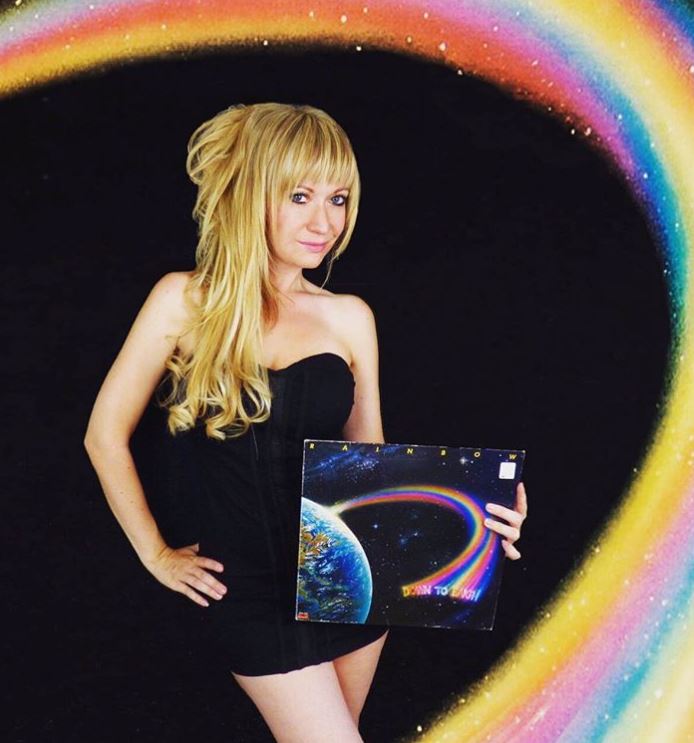 Writing and recording
The writing of Down to Earth began at Ritchie Blackmore’s house in Connecticut in December 1978. By that time, he had dismissed both bassist Bob Daisley and keyboard player David Stone soon after singer Ronnie James Dio quit the band.Blackmore had already recruited his old Deep Purple bandmate Roger Glover as producer and started auditioning musicians for the vacant slots in the band, while songwriting progressed with Blackmore, Cozy Powell and session musician Clive Chaman on bass. The backing tracks were largely written by Blackmore and Glover. “It was a great opportunity for me, and why should I bear a grudge [about being dismissed from Purple in 1973]?” recalled Glover. “I’m a huge Ritchie fan. Some of my biggest influences have come from him.”

By the end of 1978, Blackmore had recruited keyboardist Don Airey – a suggestion from Powell – and considered Ian Gillan and Peter Goalby of Trapeze to replace Dio.  In April 1979, Jack Green of The Pretty Things was hired as new bass player for the recording sessions at Château Pelly de Cornfeld, in the countryside of Southern France, but he did not stay for long. Producer Glover ended up playing bass on the album and provided lyrics for all songs. While auditions for the new singer proceeded, Glover tracked down ex-The Marbles singer Graham Bonnet, who auditioned in France and was immediately hired.

During song composition, Bonnet made his vocal melodies though his contributions remained uncredited. His vocals were not recorded with the other tracks in France, but later at Kingdom Sound Studios in Long Island, when all other recording sessions were completed. Down to Earth is the only Rainbow album to feature Bonnet, though he was still part of the band when writing for Difficult to Cure began.

Also recorded for the proposed next single, but unreleased due to Bonnet’s departure, was “Will You Love Me Tomorrow”. Bonnet had previously recorded this song for his first, eponymous solo album in 1977. Rainbow’s version was recorded in the studio in May 1980, during rehearsals for the Japanese leg of the Down to Earth tour. It was subsequently played live throughout that tour.

Tour
In 1980, Blackmore’s Rainbow headlined the inaugural Monsters of Rock festival at Castle Donington in England.

Down To Earth is the fourth studio album released by Rainbow, released in 1979. Most of the album had been already written and recorded by the time Graham Bonnet was recruited. Also recruited were Ritchie Blackmore ex-Deep Purple bandmate Roger Glover and keyboardist Don Airey, who would later join Deep Purple. Lyrics were by Glover, music by Blackmore, Airey and Cozy Powell.
This was to be the only Rainbow album on which Bonnet sang, although he was still part of the band when writing for Difficult to Cure began.

Rainbow – Down To Earth (1979)
If you’re a fan of Ritchie Blackmore you get used to band members coming and going. But for fans of Rainbow, the departure of Ronnie James Dio in 1978 was a tough pill to swallow. The mighty castle metal of the Dio years was replaced with the AOR hit Since You’ve Been Gone and the proto-Miami Vice vision of new vocalist Graham Bonnet.

But don’t pull your drawbridge up just yet. 1979’s Down To Earth is one of Rainbow’s best albums. Since You’ve Been Gone might be too slick for some, but it’s a classic rock track: deceptively sophisticated and impeccably delivered with a Blackmore guitar solo made out of sheer joy. And if the new frontman was more James Dean than James Dio, his powerful and versatile lungs allow the band to get raunchier and bluesier, bringing to mind revered Deep Purple albums like Machine Head and Burn. The driving All Night Long has brilliant Smoke On The Water style riffs and Love’s No Friend is a superbly moody sequel to Mistreated. Better still, the grandiose proto-power metal of the previous Rainbow remains in the thumping Eyes Of The World and the medieval tinges of Makin’ Love. The closest the album comes to filler is the generic No Time To Lose but even that adds some welcome up-tempo energy, as does the lively closing track Lost In Hollywood.

Inevitably, the coming and going continued with the departure of both Bonnet and drummer Cozy Powell. Which means Down To Earth becomes a transitional album in the Rainbow catalogue: steering the band from Ye Olde Rainbow to the slicker Joe Lynn Turner era. But with shades of both styles and a timeless hue of Deep Purple too, it’s a stone-cold classic in its own right. Could I be wrong? No. 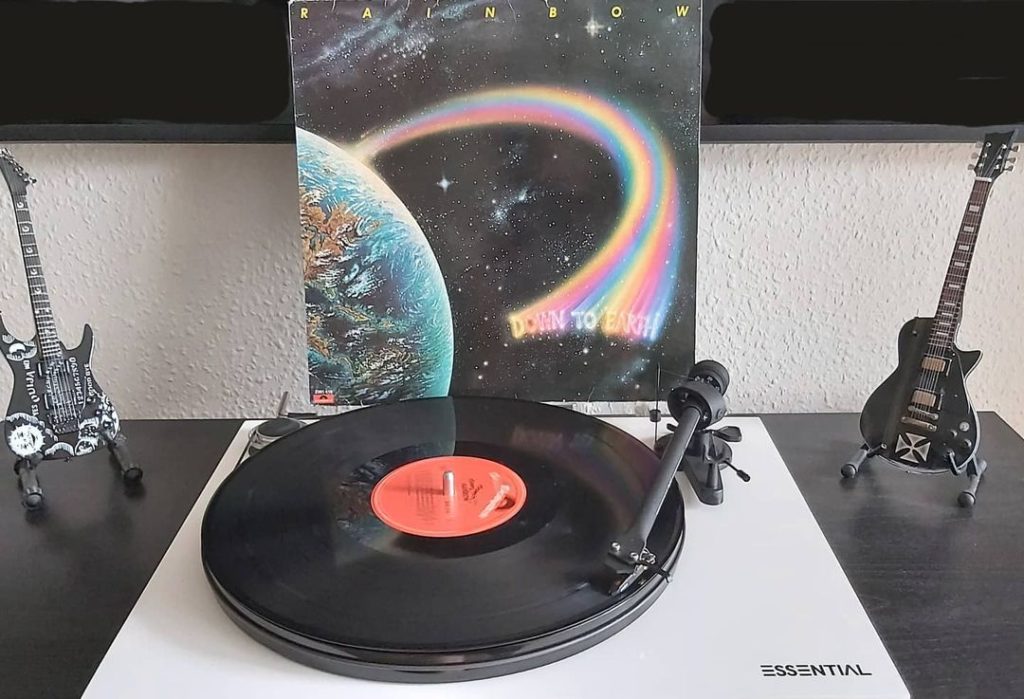 Ritchie always could find top notch talent even if they were to only last for an album or one show…hahaha  This album is a stunner. More Purple-y than the JLT stuff. 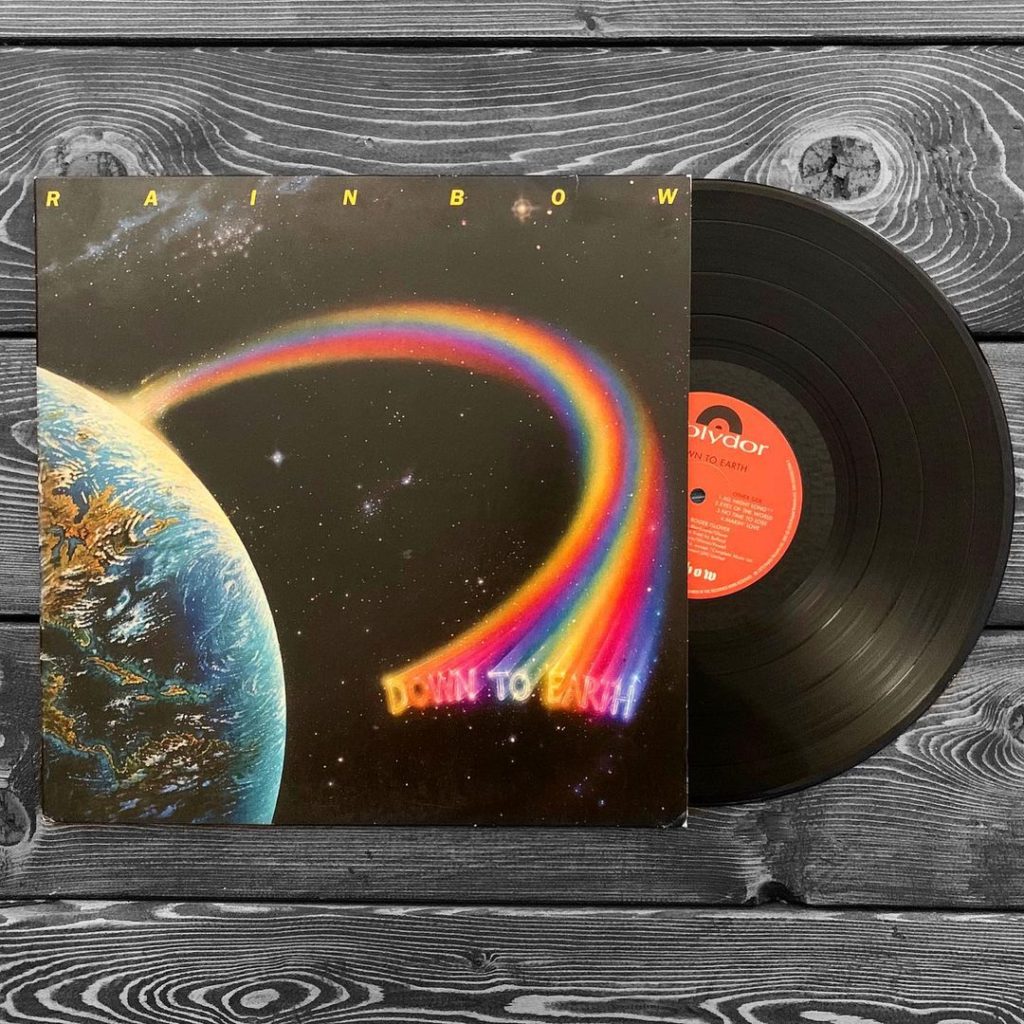 “Stone Cold” classic…I love this album.
Worth a go. If you like other Rainbow and Purple stuff then you’ll like it. 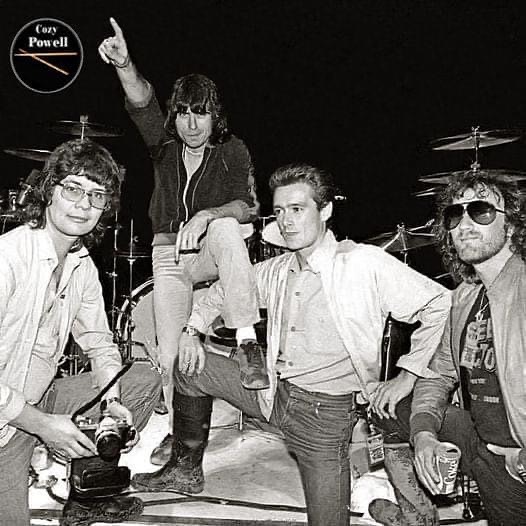 Be the first to review “RAINBOW: Down To Earth LP 1979 UK England original first edition. Check videos and audio “All Night Long”, “Eyes Of The World”, “Since You Been Gone”, “Lost In Hollywood”+ turntable audio!” Cancel reply

You're viewing: RAINBOW: Down To Earth LP 1979 UK England original first edition. Check videos and audio “All Night Long”, “Eyes Of The World”, “Since You Been Gone”, “Lost In Hollywood”+ turntable audio! € 10.77
Add to basket