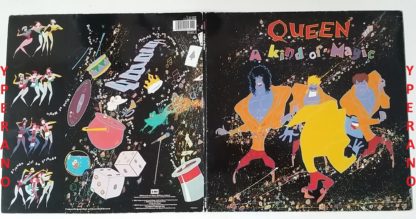 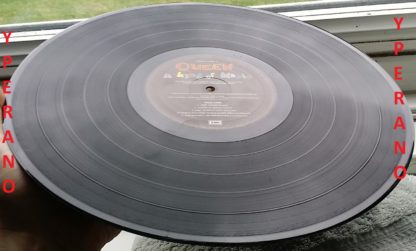 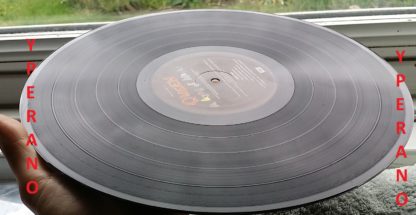 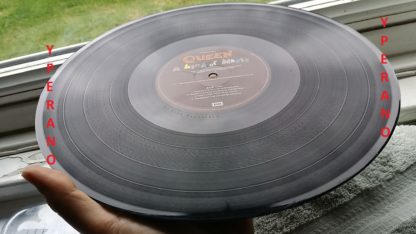 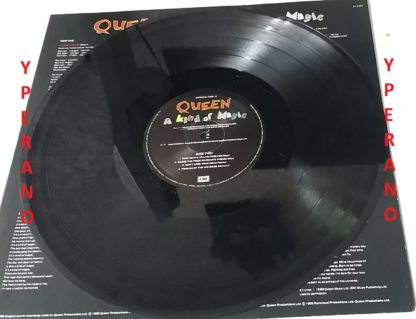 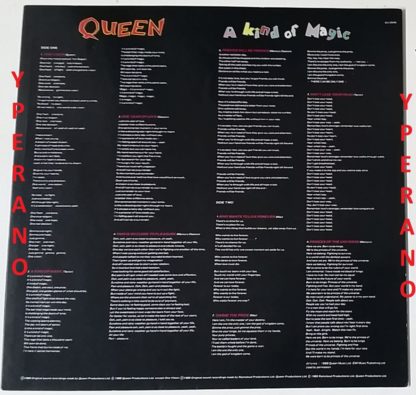 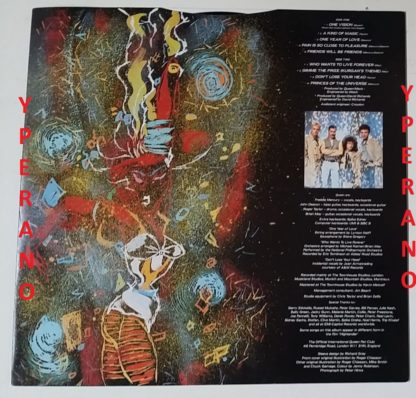 QUEEN: A kind of Magic LP 1986 UK Gatefold. Check videos “One Vision”, “Friends Will Be Friends”, “Who Wants to Live Forever”, “Princes of the Universe” 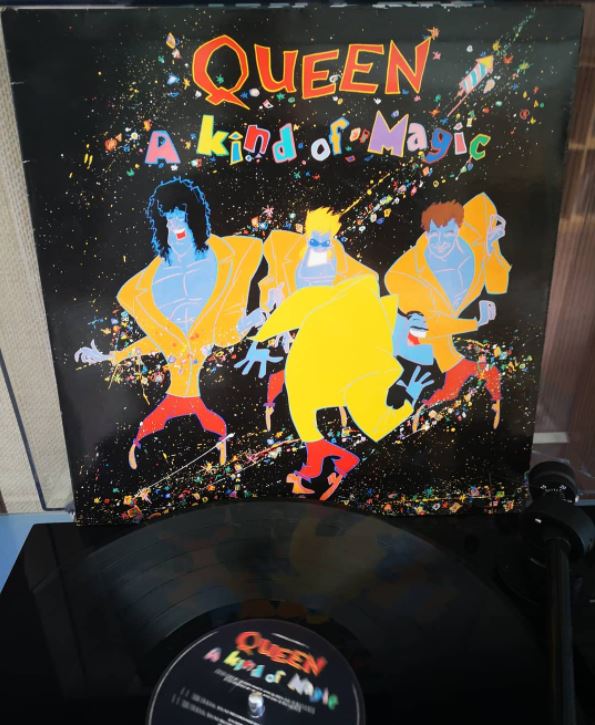 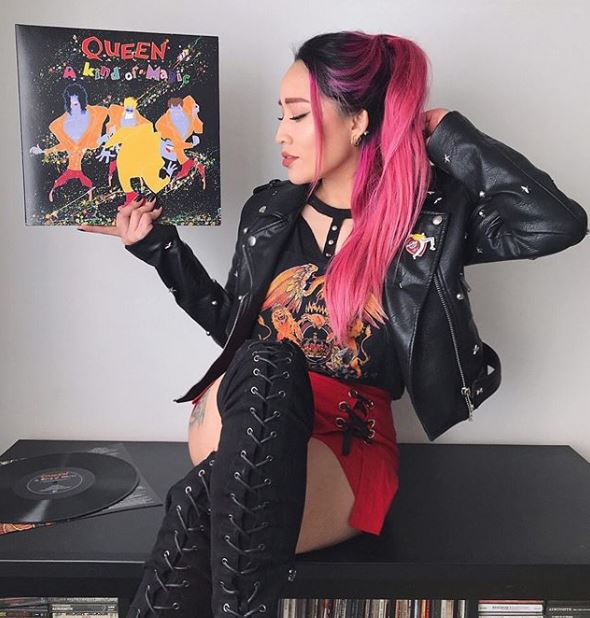 All songs of the LP: 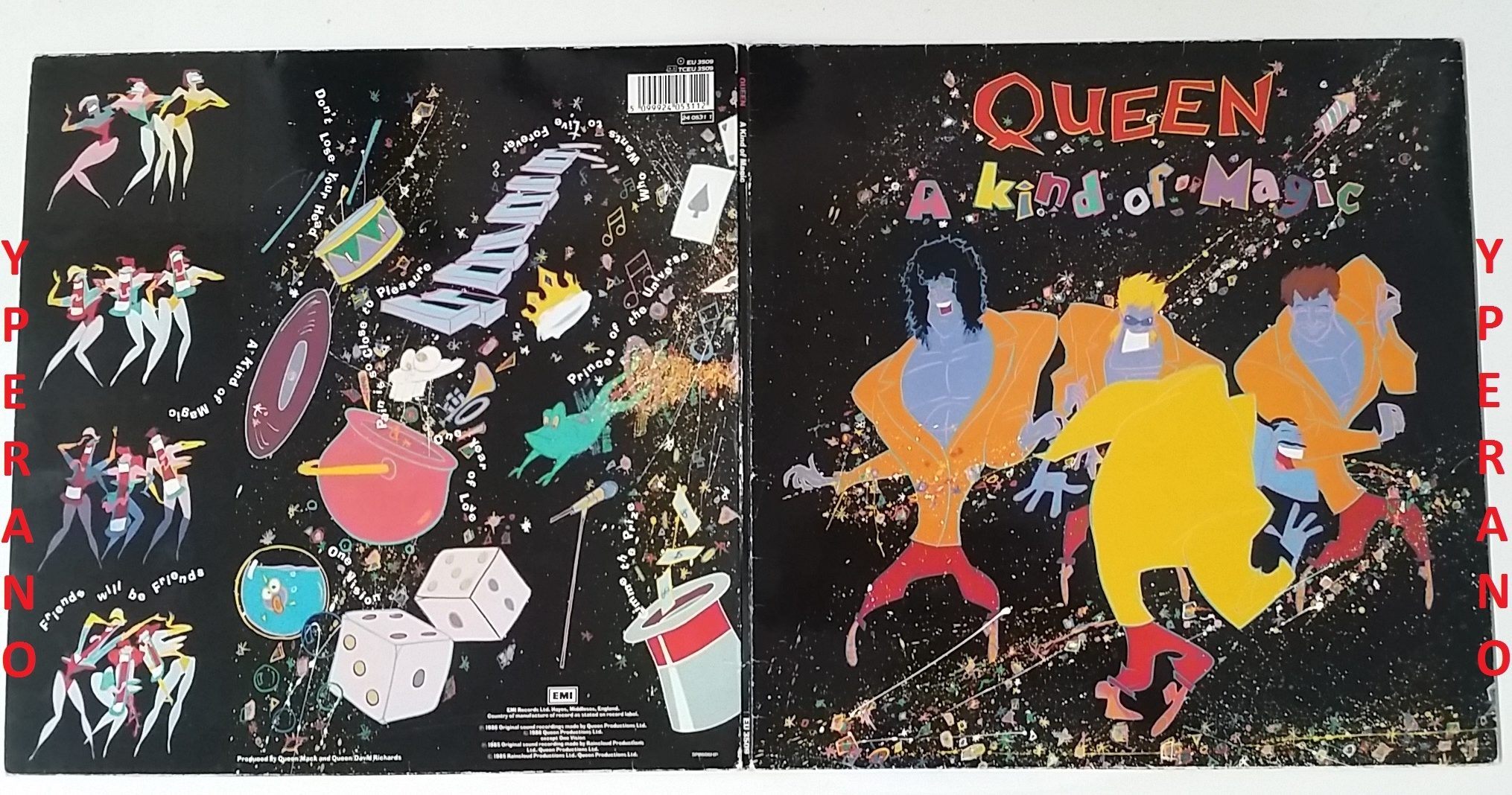 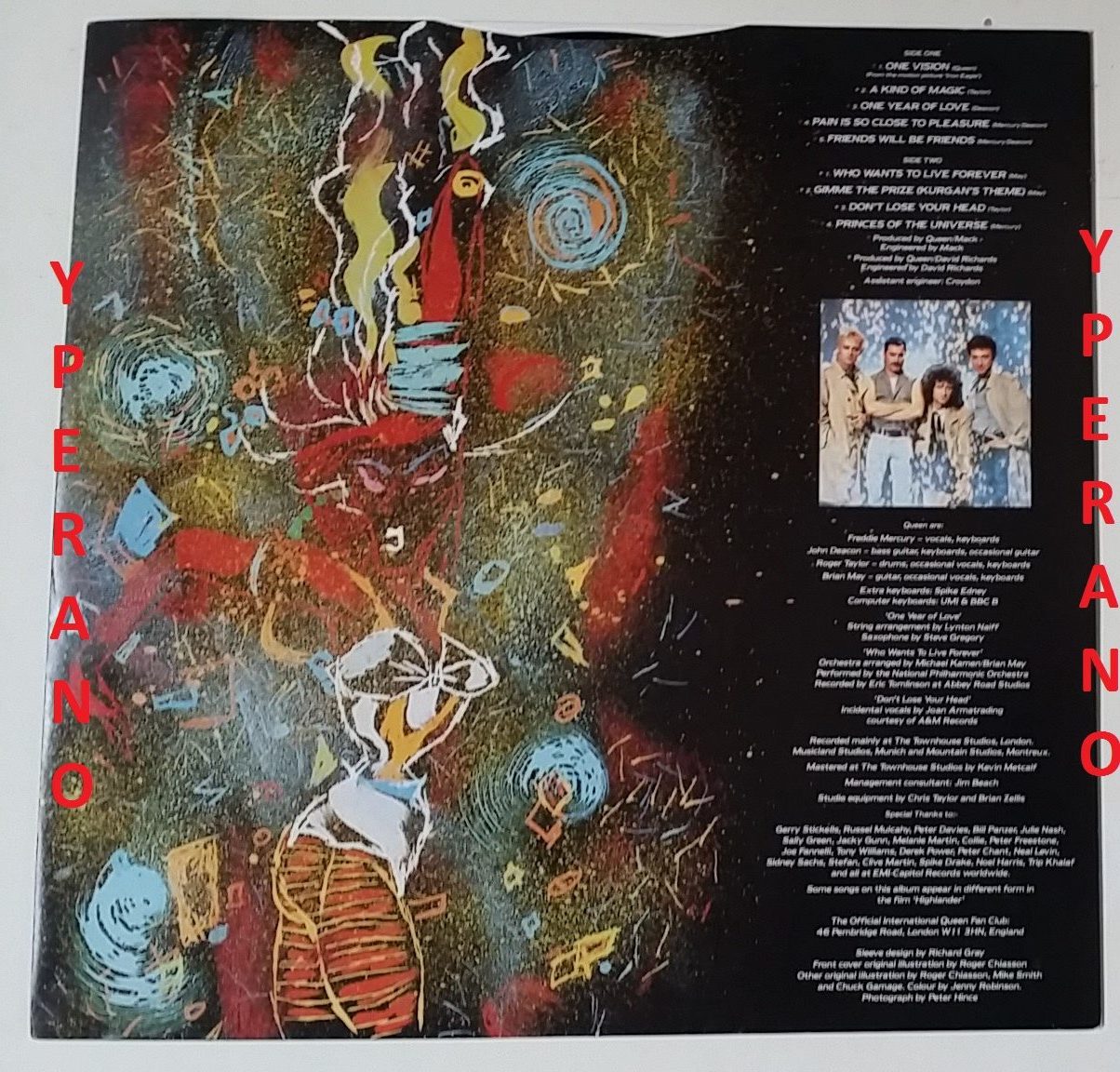 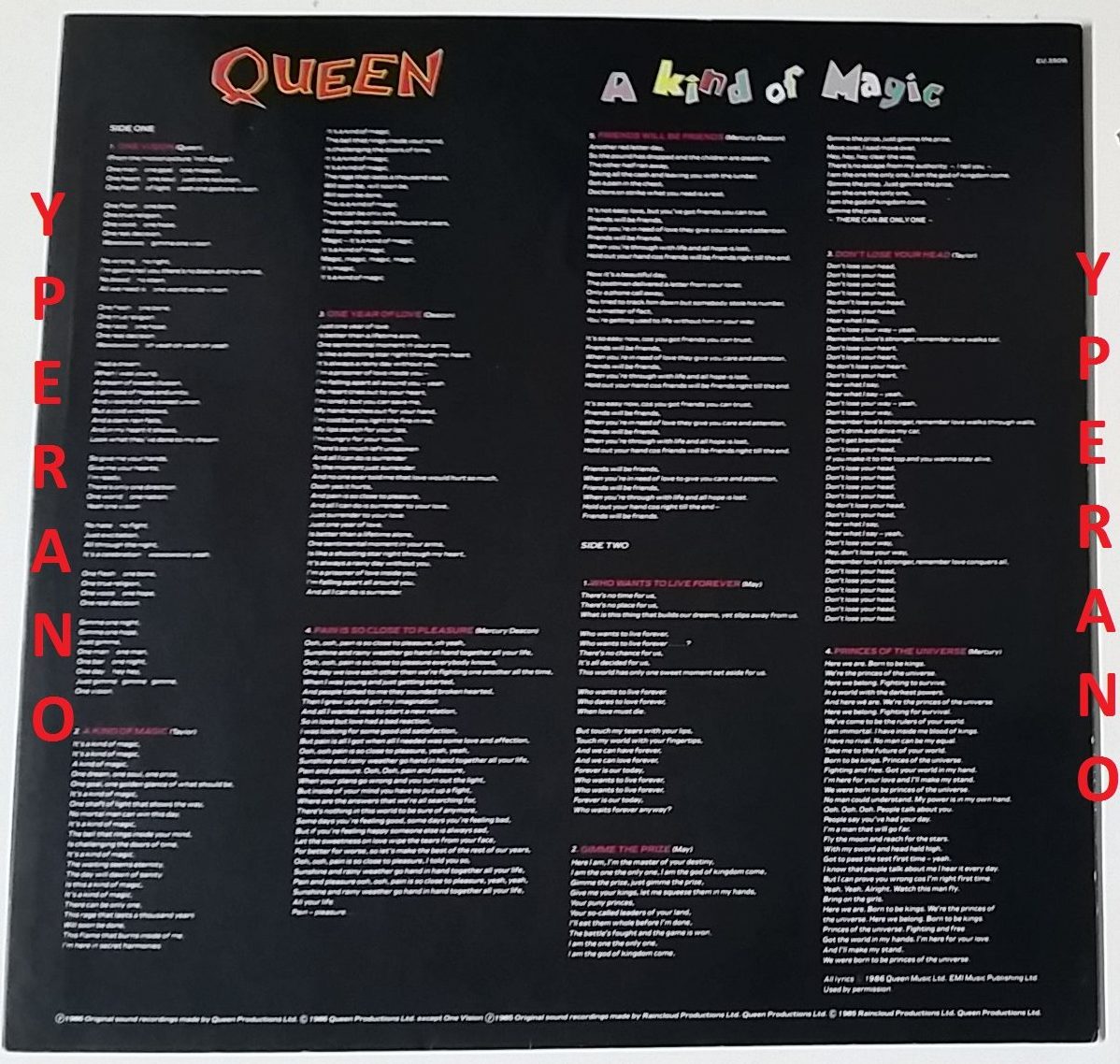 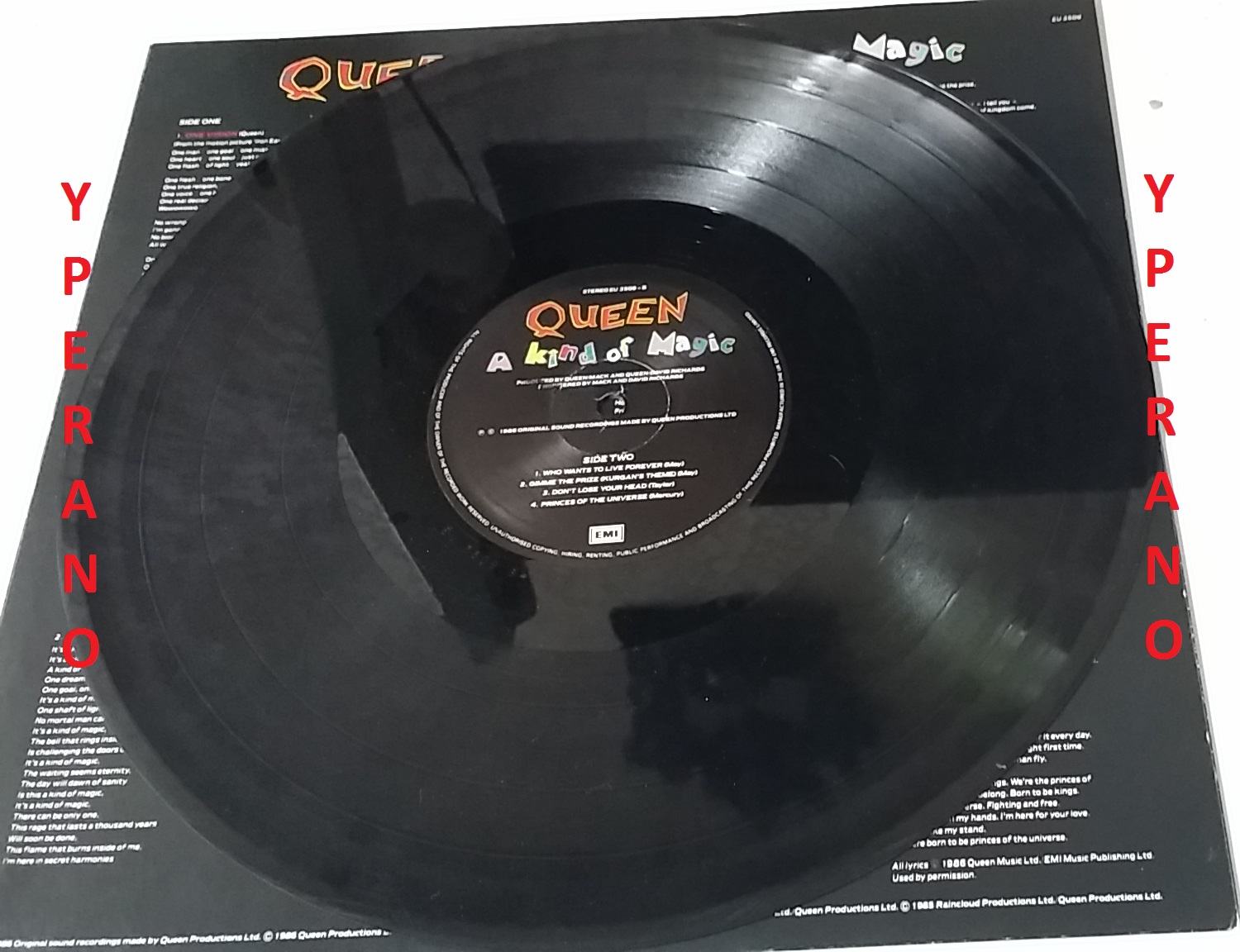 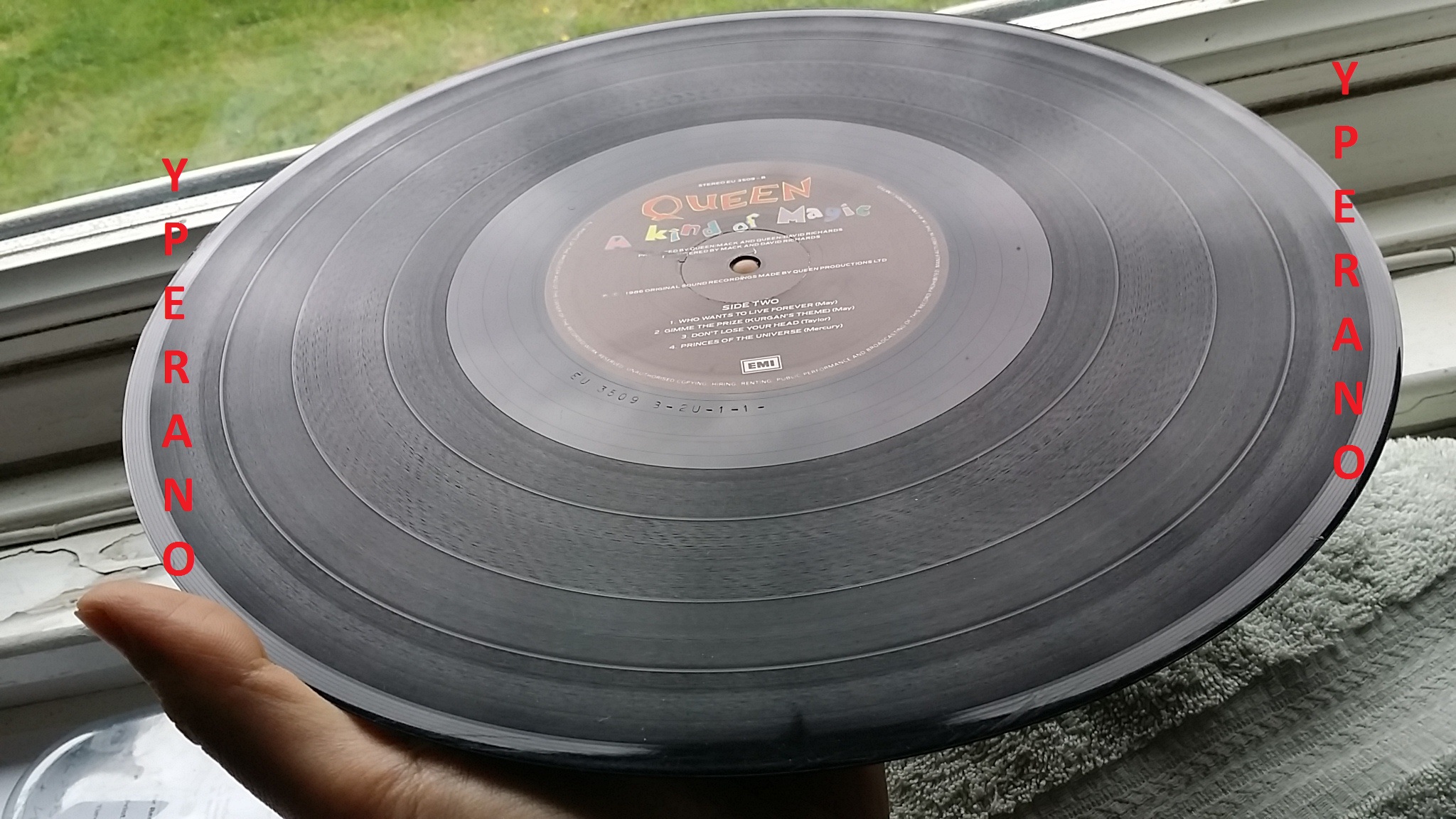 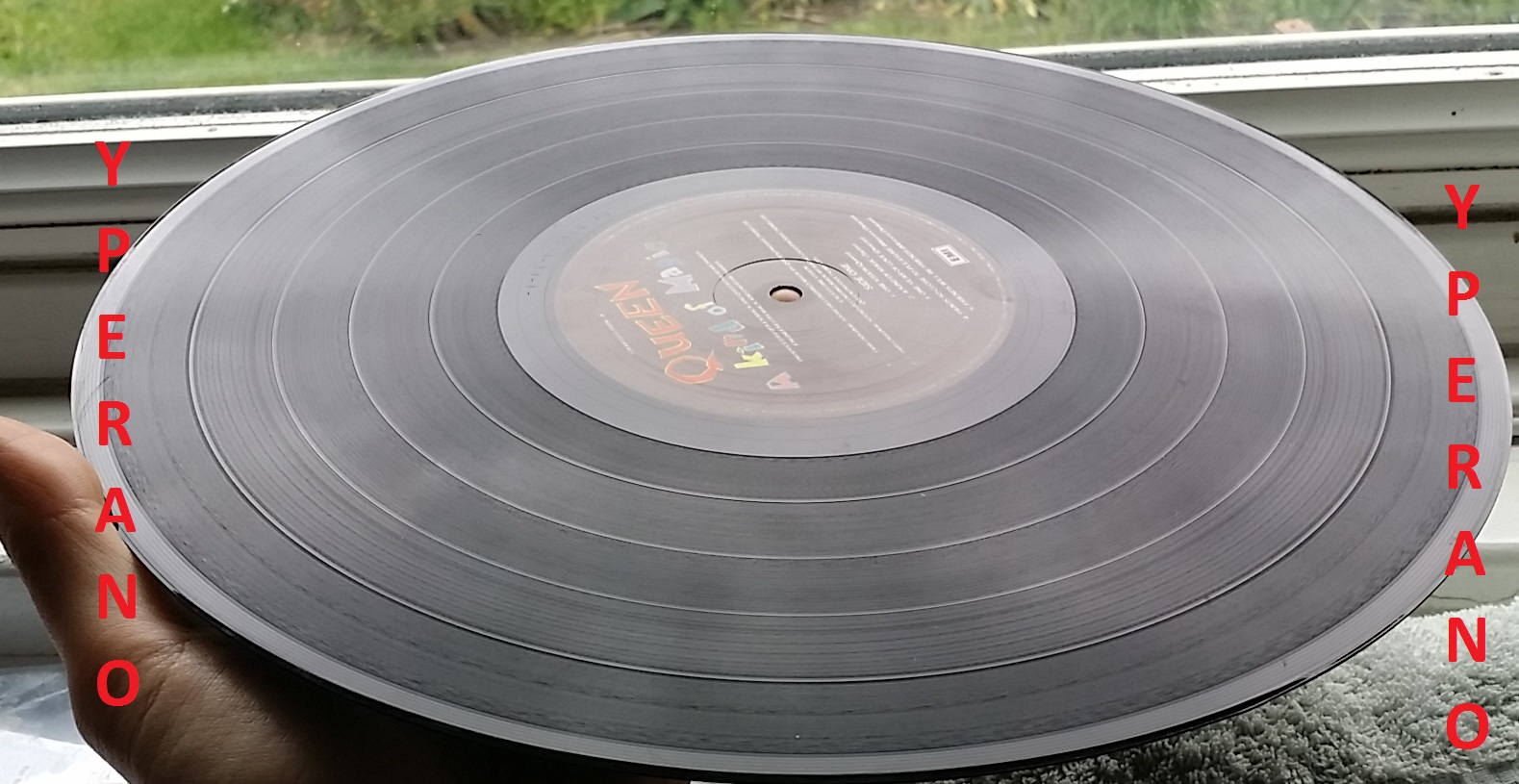 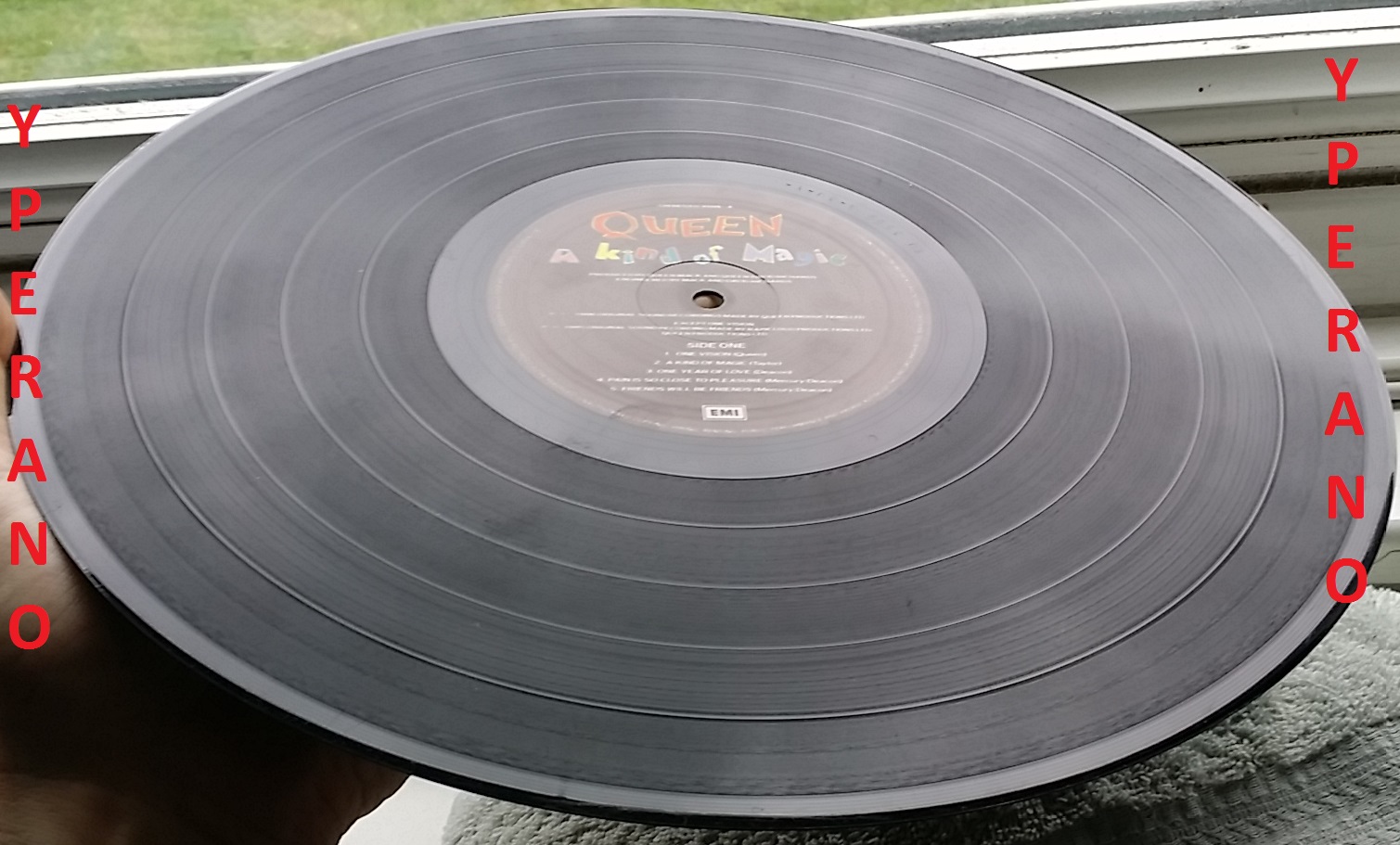 A Kind of Magic is the twelfth album by English rock band Queen, released in 1986. It was their first studio album to be recorded digitally, and is based on the soundtrack to the film Highlander, the first in a series directed by Russell Mulcahy.
Although Queen would release another three albums with Freddie Mercury (including the posthumous Made in Heaven), A Kind of Magic would turn out to be the band last album promoted with a concert tour, because of Mercury diagnosis with HIV the following year and his eventual death from AIDS in 1991. For the first time in their career, the band allowed filming of them while they were in the recording studio. The video for “”One Vision”” shows them in various stages of writing and recording the song.
A Kind of Magic reached #1 in the UK, selling 100,000 copies in its first week, and remained in the UK charts for 63 weeks. The album spawned three hit singles: the album title track “”A Kind of Magic””, “”One Vision”” and “”Friends Will Be Friends””. The sixth track on the album, “”Who Wants to Live Forever””, features an orchestra conducted by Michael Kamen, while the last track, “”Princes of the Universe””, is the theme song to Highlander.

A Kind of Magic and Highlander
The album enjoys the status of an unofficial soundtrack for the 1986 film Highlander (for which no official soundtrack album was released). The title, “”A Kind of Magic””, may have come from one of the lines Connor MacLeod (Christopher Lambert) says to describe his immortality. Six out of nine songs on the album appeared in the film, although in different versions. The three songs that did not appear in Highlander are “”Pain Is So Close to Pleasure””, “”Friends Will Be Friends”” and “”One Vision””

Critical reaction to A Kind of Magic was mixed. Rolling Stone described the album as “heavy plastic”, concluding, “This band might as well put some pomp back in its rock. Its members are never going to make it as dignified elder statesmen.” The Times described the album as one of “the most spectacularly successful releases this year”, yet questioned its appeal, asking, “why does it not extend to those of us who are given the records to review?” People Weekly wrote, “There hardly a personal expression, let alone an intimate one, in this album… The group can be dazzling. In this case they’re just overbearing.” In a retrospective review, Allmusic were more favourable, writing, “It may not have been as cohesive as some of their other albums, but A Kind of Magic was their best work in some time.” Kerrang! reviewer wonders “how much of the album is the ‘real’ Queen and how much is the result of the constraints/musical slant imposed upon them by writing material to go with a movie”, concluding that “only a band of Queen stature (…) could put out an album of such diverse songs without disappointing a sizeable portion of their fans”. In the 1994 edition of The Guinness All Time Top 1000 Albums, A Kind of Magic was voted #171 in the all-time greatest rock and pop albums. In 2006, a national BBC poll saw the album voted the 42nd greatest album of all time. In 2007, Classic Rock ranked A Kind of Magic the 28th greatest soundtrack album of all time.

One Vision After Queen contribution to Live Aid, Freddie Mercury was enthusiastic about the band and rang them up to go to the studio and write a song together, the finished product being “One Vision”. All four band members were credited as songwriters, however Roger Taylor stated in an interview with Australian TV that originally it had been his song, with serious lyrics about men like Martin Luther King, but joked that “that rotter Freddie” had changed all his lyrics with additions like “one shrimp, one prawn, one clam, one chicken”, and even name-checking John Deacon. Brian May played the opening synth section using a Yamaha DX-7. The song does not appear in Highlander, but was used in the 1986 movie Iron Eagle. 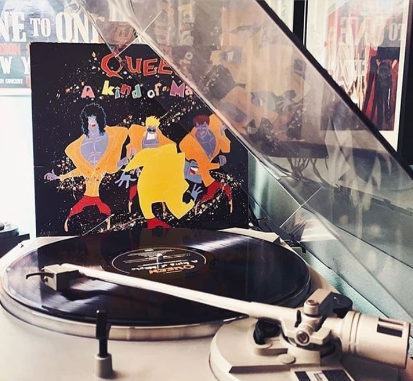 A Kind of Magic
“”A Kind of Magic”” was written by Taylor. He has admitted writing down some lyrics, which proved to be the basis for both “”One Vision”” and “”A Kind of Magic””, something made obvious by the demo of the song appearing for the first time on the 2011 Universal Bonus EP, which mixes some lyrics. Later on, unbeknown to Taylor who was off to the US for a few days, Mercury took it over, “”polished”” the lyrics, added the bassline, some connectors and re-arranged the structure. Regardless, the new, more pop oriented version was still credited to Taylor. It was this version that was featured on the album, released as a single and included their auxiliary live musician, Spike Edney, playing some keyboards. The heavier, rockier alternate version, also making its official debut on the 2011 Universal Bonus EP, played during the credits of Highlander. The song was covered by Elaine Paige in 1988 on her album called The Queen Album.

One Year of Love
“”One Year of Love”” is a song by Deacon. The album version features him playing Yamaha DX-7 synth, a string orchestra conducted by Lynton Naiff and a saxophone played by Steve Gregory. Deacon decided to substitute the guitar components with a saxophone solo after a discussion with May, who does not appear in the song. It was released as a single in France and Spain only, and appeared during the bar scene in Highlander. It was also covered by Elaine Paige in 1986 and later by Dutch singer Stevie Ann in 2006.

Pain Is So Close to Pleasure
“”Pain Is So Close to Pleasure”” began as a riff idea by May. Deacon and Mercury subsequently turned that into a Motown style song, with Deacon playing rhythm guitar. A slightly remixed and reworked version was released as a single in 1986, reaching #26 on the Dutch charts. The title also appears as a line in “”One Year of Love””. This would be one of the last times Mercury would sing a Queen song completely in falsetto.

Friends Will Be Friends
“”Friends Will Be Friends”” was written by Mercury and Deacon, with lyrics written by Mercury (which was confirmed by May on his website).[13] It is one of the last of Mercury piano ballads, and in some ways is a musical similitude with older Queen material, such as “”Play the Game”” and “”We Are the Champions””. It is another song not featured in Highlander. It was noted as being a modern update of the 70 Queen rock anthems “”We Are the Champions”” and “”We Will Rock You”” and reached #14 in the UK.

Who Wants to Live Forever
“”Who Wants to Live Forever”” was composed by May and sung in the album version as a duet between himself and Mercury. Synths are done on a Yamaha DX-7 by May, and the orchestra was arranged and conducted by Michael Kamen. Deacon did not participate, and Taylor played some drum-machine parts and contributed backing vocals. Percussion was taken over by the orchestra as well as bass (double bass in this case), in spite of Deacon miming those parts in the video. It serves as somewhat of a ‘love theme’ of Highlander, as it adds to the sub-plot of the movie (in the film, Mercury sings the first verse as well, unlike the album version, which has May singing first).

Gimme the Prize (Kurgan Theme)
“”Gimme the Prize”” was written by May. This song is featured in Highlander, and also samples various lines from the film, most notably “”I have something to say: It better to burn out than to fade away”” and “”There can be only one””, spoken by actors Clancy Brown (The Kurgan) and Christopher Lambert (Connor MacLeod) respectively. Director Russell Mulcahy states in the DVD commentary that this was his least favourite of the band songs used in the film because he does not like heavy metal. May also commented (to a Japanese magazine in 1986) that both Mercury and Deacon hated the song.

Don’t Lose Your Head
“”Don’t Lose Your Head”” was composed by Taylor and features Joan Armatrading in a vocal cameo. The song takes its name from a line spoken in Highlander, and is played for a short time when Kurgan kidnaps Brenda. The song then segues into a cover of “”Theme from New York, New York””, though it is only a small clip. An instrumental version of the track entitled “”A Dozen Red Roses for My Darling”” is featured as the B-side to “”A Kind of Magic””.

Princes of the Universe
“”Princes of the Universe”” is the film theme song and the only song on the album for which Mercury received sole credit. It is quite a complex and heavy work, demonstrating Queen returning to their hard rock and heavy metal roots. The song is played in the opening credits of Highlander. The music video uses clips and scenery from the movie, as well as a cameo by Christopher Lambert, who fights with Mercury at Silvercup Studios, which was a location from the film.

Singles:
Queen recorded “”One Vision””, released in the UK on 4 November 1985, the first after their much-lauded appearance at the Live Aid concert. It did well on the charts, reaching #7 in the UK and making the top ten throughout Europe. The song appeared in Iron Eagle.
“”A Kind of Magic””, released in the UK on 17 March 1986, reached #3 on its home chart. While charting well everywhere else, it peaked at #42 in the US and has been played on radios mostly in New England (Similar to their first single “”Keep Yourself Alive””). Russell Mulcahy, director of Highlander, directed the song accompanying video.
“”Friends Will Be Friends””, released on 9 June 1986, reached #14 in the UK and made the top 40 throughout Europe.
“”Who Wants to Live Forever””, released on 15 September 1986, reached #24 in the UK. The National Philharmonic Orchestra featured in the song video, along with 40 choirboys and two thousand candles.
“”Pain Is So Close to Pleasure””, released in the US and parts of Europe only.
“”One Year of Love””, released in France and Spain only.
“”Princes of the Universe””, was never released as a single in the UK. While not a hit, it is a cult favourite, due to Highlander, in the US. It was also used as the theme music for the Highlander television show which followed the film in 1992-“98. The music video featured Christopher Lambert and the band on part of the film set, and is cut with scenes from the film. The song also appears on Greatest Hits III. It was released as a single in the Netherlands on 28 February 2000.

Be the first to review “QUEEN: A kind of Magic LP 1986 UK Gatefold. Check videos “One Vision”, “Friends Will Be Friends”, “Who Wants to Live Forever”, “Princes of the Universe”” Cancel reply 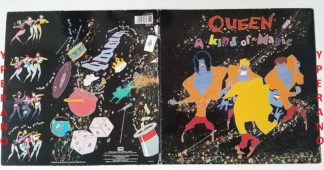 You're viewing: QUEEN: A kind of Magic LP 1986 UK Gatefold. Check videos “One Vision”, “Friends Will Be Friends”, “Who Wants to Live Forever”, “Princes of the Universe” € 11.96
Add to basket