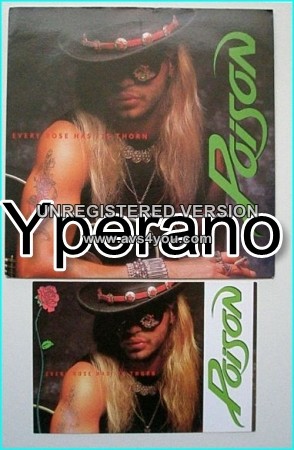 POISON: Every rose Has Its Thorn 7″ + Back to the Rocking Horse. Mega Ballad. Comes with a free scratch & sniff postcard. VIDEO!

It went to the top of the pop charts and is the quintessential hair metal ballad. It starts off with an acoustic guitar, eventually kicks into power ballad mode, and then mellows out again at the end. Poison was number one on my list of the best hair bands, so it’s only appropriate one of their songs is the best hair metal ballad.

Poison had previously shown few signs of having a soft centre (Talk Dirty To Me, anyone?) so when they released the fragile EveryRose Has Its Thorn it shocked the hell out of people. A suitably barbed composition, this is singer Bret Michaels’s finest hour. His semi-tearful display (and especially his pronunciation of ‘cowboy’ as ‘kee-arh-b-hoy’) elevates this sad, sad song into the fluffiest echelons of power ballad-dom. Even bad boys with big hair get the blues.

Choice lyric: ‘Instead of making love… we both made our separate ways’

According to singer Bret Michaels, the recording sessions for “Every Rose” were fraught with infighting and squabbles among band members. “It was like, I totally thought this would help us move forward, you know, push the envelope, sonically,” Michaels has said, “but the others were just not into it, you know? I mean, C.C. has always been the metal rawk one in the group, and he thought I was a fucking sell-out. He hated playing “Every Rose”; the song is one of the reasons he refuses to speak to me anymore. Although I think me sleeping with his girlfriend of six years didn’t help either.” C.C. Deville would later on mentioned in the Poison biography Sex, Drugs & Rock’n’Roll … & Sex & Drugs Some More: The Poison Story, “Well thats Brets take, okay? And you know what, hes a cunt. Thats all I have to say about that.”

Song:
Musically, the song starts quietly and features two intricate guitar solos, one mellow and one fast. Among guitarists, the song is notable for epitomizing the standard G – Cadd9 progression in pop/rock. During the same period, Poison had been playing at a cowboy bar called “The Ritz” in Dallas, Texas, accounting for the songs recognizable references to cowboys in the chorus, along with the twang in Bret Michaels’ vocals, which give the song a country feel not often heard in power ballads composed by glam metal bands.
In an interview with VH1s Behind The Music, Michaels said the inspiration for the song came from a night when he was in a laundromat waiting for his clothes to dry, and called his girlfriend on a pay phone. Michaels said he heard a male voice in the background and was devastated; he said he went into the laundromat and wrote “Every Rose Has Its Thorn” as a result. The name of the girl in the song is Tracy Lewis. Michaels has revealed that the “Rose” in the songs title is a reference to a womans vagina and that “Thorn” refers to vaginal teeth.
When asked in Twisted Sister: The Completed Uncensored Story about why the glam metal scene came to an end, Dee Snider of Twisted Sister said: “Hey man, it was them motherfuckin’ “power ballads”, you know! Bret is gonna kill me for saying this but “Every Rose” completely killed the metal in the pop metal scene man. All of a sudden, all the heavy metal rock bands got rid of their distortion pedals and went acoustic.”

The music video to “Every Rose” was similar to those filmed for other 1980s power ballads. It features Michaels sitting down, playing the guitar, and singing along to the song, interspersed with black-and-white clips from concerts, and color frames of a storyline that follows the song. 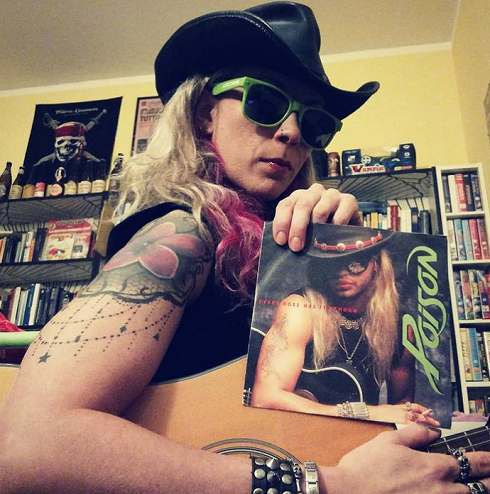 Be the first to review “POISON: Every rose Has Its Thorn 7″ + Back to the Rocking Horse. Mega Ballad. Comes with a free scratch & sniff postcard. VIDEO!” Cancel reply

You're viewing: POISON: Every rose Has Its Thorn 7″ + Back to the Rocking Horse. Mega Ballad. Comes with a free scratch & sniff postcard. VIDEO! € 9.31
Add to basket