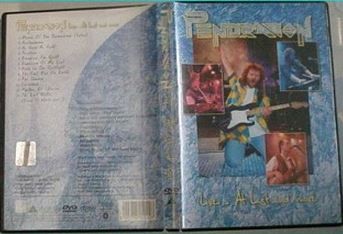 Releases information
DVD Metal Mind Records MMP DVD 0005 (2002)
This is a must for every Pendragon fan and for those who want to know what Pendragon sound and look like live. They really smash your senses! The sound was digitally remastered on the DVD version and with six discrete channels it makes you feel like you are taking part in the live show! You’ll find all the greatest songs played during “The Masquerade Overtour”, plus a pictures gallery, an interview with Nick Barrett and the promo video of “Saved by You”. This will be a real pearl in your Pendragon collection!
130 minutes. Track listing: March of the Torreodores (intro) – Nostradamus – As Good as Gold – Paintbox – Breaking the Spell – Guardian of my Soul – Back in the Spotlight – The Last Man on Earth – The Shadow – Leviathan – Masters of Illusion – The Last Waltz (Queen of Hearts part 3) + only on the DVD version: rare video of “Saved by You”, band and individual members biographies, an interview with Nick Barrett, discography, photo gallery, desktop images and art gallery.

5 stars As good as gold
For understandable reasons, Pendragon do not tend to tour much in their home country of the UK. Over the years, anyone from these parts who has wished to see them has been pretty much compelled to travel to London for one of their occasional gigs. As with many other British neo-prog bands their greater success in continental Europe has however made touring there a viable proposition. It is ironic therefore that my first visual experience of this fine band live is through seeing this recording of a concert recorded in Poland in 1996.

The gig was part of the Masquerade overtour, to promote the then current album of similar name. Not surprisingly, tracks from that album (The Masquerade overture) feature heavily, dominating the performance. Since this was in my book probably Pendragons best album, it follows that the DVD is also highly enjoyable.

Things get even better though, as the audio and visual qualities here are excellent, putting the efforts of many others to shame. The 5.1 surround sound is clean and well balanced, while the directing of the filming shows an awareness of the bands music which means that the shot moves to the appropriate soloist or performer at exactly the right moment.

The stage set is colourful and artistic reflecting the wonderful sleeve images of their albums, but the band do not resort to face-paint or pyrotechnics, preferring to let the music speak for itself. There is a palpable enthusiasm throughout the band, who are clearly proud of the new material they are presenting. The highlight for me is the wonderful The shadow, a true epic of prog which blends symphonic, neo-prog and other styles with some fine melodies to create a masterpiece of the genre.

While Nick Barrett is highly visible centre stage on guitar and vocals (he insists in the interview it is not his band), Clive Nolan slips in some great keyboard solos along with his usual waves of layered sounds. Peter Gee (bass) and Fudge Smith (drums) complete the line up.

The DVD has a number of extras including a rare Nick Barrett pop video where he looks like a Duran Duran member (I was going to say reject, but that would be unfair!). There is also a lengthy interview with Barrett filmed in the back of a pub. Barrett manages make his answers rather more interesting than the rather uninspired questions of the Polish interviewer.

In all, a superb DVD both in terms of content and quality of production. It only serves to emphasise though what it pity it is that this great band do not enjoy greater incentives to tour more widely.

Review by SouthSideoftheSky
The best of classic Pendragon performed live
This DVD features a live concert performed in Poland on the tour in support of the acclaimed Masquerade Overture album. As many consider that album to be Pendragons best ever, this DVD can be seen as capturing the band at the very peak of their long career. Most of the Masquerade Overture album is performed here as well as some of the best songs from The Window Of Life and The World albums. The set list can thus be said to constitute the best of this classic Pendragon period. Indeed, I personally think that this live recording outshines the studio albums from which these songs were originally taken. Obviously – as this is after all a live recording – the sound cannot be compared to that of the studio albums, but this is fully compensated for by the strong set of songs and the passionate performances. The Polish audience is very appreciative indeed and there is a very nice atmosphere created by the interaction between the band and the audience.
Live At Last is a good introduction to the music of Pendragon. Highly recommended! 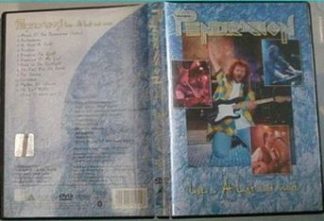