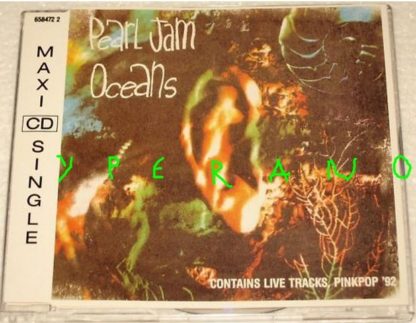 “Oceans” is a song by the American rock band Pearl Jam. Featuring lyrics written by vocalist Eddie Vedder and music co-written by Vedder, guitarist Stone Gossard, and bassist Jeff Ament, “Oceans” was released in 1992 as the fourth single from the bands debut album, Ten

“Oceans” features lyrics written by vocalist Eddie Vedder and music co-written by Vedder, guitarist Stone Gossard, and bassist Jeff Ament. Vedder on the song:
I remember for “Oceans”, someone asked me to put change in the parking meter for them. I went and did that and then I came back and was locked out. It was drizzling and I wasn’t dressed for an outing in the rain. I had a scrap of paper and a pen in my pocket, and they were playing this song [inside]. All I could hear was the bass coming through the wall, this window that was boarded up. So I wrote the song to the bass. I wasn’t even listening to hear the song at first. When I heard a break, I’d start pounding on the door…trying to get out of the rain. So as I was doing that, I thought, fuck it, I might as well write something.

Gossard on the song:
We wrote it, we played it and Ed sang it, which is another thing that he does. I’d never seen anyone engage with song writing the same way. Heres the song, let me play it for you. It goes like this. Okay, theres a change here, lets do it and he would sing it. I’d hear the melodies and I’d think, okay, hes gonna write words or whatever and then I realized later that he actually had written the words right there. I couldn’t understand how somebody could do that. Since then I’ve met a lot of people that can do it so it was an eye opener but he does it better than anyone I’ve ever seen do it.

Drummer Dave Krusen on the song:
We originally tracked drum kit on that song. Then I added three tympani parts. I remember we were all in the control room listening to the tympani part with the drums muted. Someone commented how cool it sounded like that, so we kept it that way. I’m glad we did.
When the band joined the albums mixer, Tim Palmer, in June 1991 in Dorking, England for mixing, Palmer overdubbed a pepper shaker and a fire extinguisher as percussion on the track. Palmer said, “The reason I used those items was purely because we were so far from a music rental shop and necessity became the mother of invention.”

Composition:
“Oceans” was performed in open D tuning.[5] The song is musically and texturally different from the rest of the album. Ament said, “When we were picking songs for Ten we thought it was important to pick the weirder moments, like “Oceans”, because we wanted to be able to explore those areas down the line.”

Gossard on the song:
I love “Oceans”. That probably sums up why I get excited about song writing. Its like open D tuning where the first chords just straight across and its just two fingers that come on and off to create the whole thing and then it moves down one position and it moves back up. It has a tiny little change in it but its also got three big movements. What I love about music is aesthetic chords; the simpler the better and then another set that does something to those original chords. Its a really simple arrangement.

Lyrics:
“Oceans” was inspired by Vedders affinity for surfing. Following Pearl Jams performance of the song at the bands 1992 MTV Unplugged performance, Vedder stated, “[that was] a little love song I wrote about my surfboard…no actually its to somebody named Beth who hopefully I’ll see tomorrow.”

Release and reception:
While the “Oceans” single was released commercially to international markets in 1992, the commercial single was not released in the United States until June 27, 1995 and was only available as a more expensive import version beforehand. Outside the United States, the single for “Oceans” was released commercially in Australia, Austria, and the United Kingdom. “Oceans” reached the top 30 in the Netherlands and was a moderate top 20 success in New Zealand.
In March 2009, “Oceans” was made available as downloadable content for the Rock Band series as a master track as part of the album Ten. The drum kit which was originally tracked by Dave Krusen was included on this release, unlike the remixed Ten which it was released to support.

Music video:
The music video for “Oceans” was directed by Josh Taft, who had previously directed the “Alive” and “Even Flow” music videos for the band. The video was filmed in Hawaii in September 1992. The black-and-white video features scenes of the band members and other people in Hawaii, including Vedder surfing, Gossard driving, people swimming and running, and small planes flying. It also features performance footage of the band filmed in Maui, Hawaii at War Memorial Gymnasium. The video was only released to areas outside of the United States in late 1992. The video was not released in the United States as the band felt Ten was already too big. The video clip for “Oceans” can be found on the Touring Band 2000 DVD as one of the Special Features.

5.0 out of 5 stars A great CD from a legendary band,
Oceans / Why Go / Deep / Alive -Live (Audio CD)
When I first heard Oceans, it didn’t strike me as much as Alive or Even Flow, but this is a song I have grown to love and even like better that Alive. There is so much emotion in this song and it really comes out through Eddie Vedder’s vocals. Another great thing about this CD is that it gives you live versions of songs that they hardly ever play live anymore. Why Go and Deep are great songs and deserve to be played. Alive (live) will definitely attract any Pearl Jam fan but its the hard-core fans that will listen and appreciate Why Go and Deep. Thank you Pearl Jam for such great songs.

5.0 out of 5 stars Pure PJ perfection!,
Pearl Jam is the band that has defined the nineties more than any other. This single is beautiful and powerful, peaking with the superhit Alive(live)!!. Four strong songs!

5.0 out of 5 stars Let the Oceans take you away.
Oceans is a very touching song. Tranquillity and peaceful, along with a feeling of melancholy rule the air whenever you put this CD on.
The best part of this CD is “why go” played live, one of the only places where you can get it live.
the rest of the live tracks are awesome too.
this CD is a must for any PJ fan. 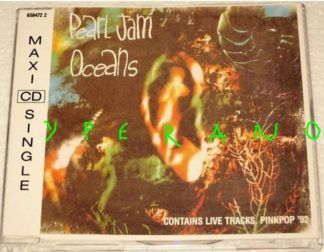