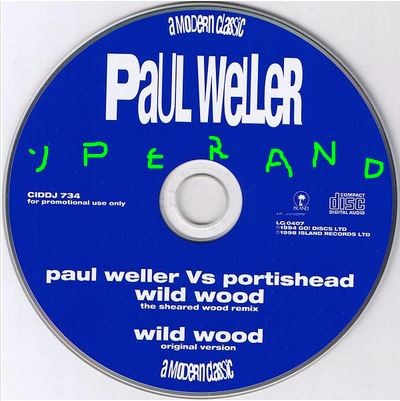 “Wild World” is a single by Paul Weller that was released in 1993 as the title track from his second album Wild Wood. It reached no. 14 in the UK charts in September 1993.

Uncut magazine rated Wild Wood as Weller’s ninth best ever song and the best of his solo career, with the Smiths’ bassist Andy Rourke praising it as a “very easy, kicking-back sort of song”

“For promotional use only.”
No artwork.
Clear, slim jewel case.
Promoting the UK release of Paul Wellers Greatest Hits ‘Modern Classics’
Sticker back reads:
Released for the very first time sheared Wood’ is the Portishead remix of Paul Wellers solo classic ‘Wild Wood’. Along with its original it is now being released as a double A-Side single. ‘Wild Wood’ itself is taken from Paul Wellers Solo Greatest Hits package ‘Modern Classics’. Paul is soon to embark on a short European Tour and will then start work on his new studio album which is set for release in 1999.
Release Date 28th December.
Anglo Plugging: 0717 800 448 – fax 0171 371 9490.
1994 Go! Disc Ltd.
© 1998 Island Records Ltd.
Barcode and Other Identifiers
Other (Label Code): LC0407

Wild Wood was Paul Wellers second solo record, released in September 1993. It made it to number 2 in the UK charts, and contained three UK hits: “Wild Wood”, which reached #14 in the UK charts.

“I’d be lost without my favourite record shops. Let’s all keep them all going in this very strange time. Music will lift our spirits and soothe our souls.” 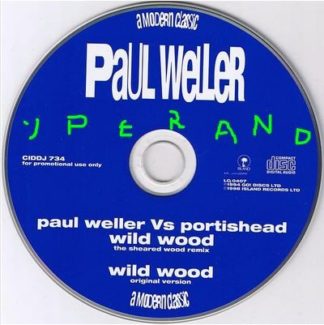