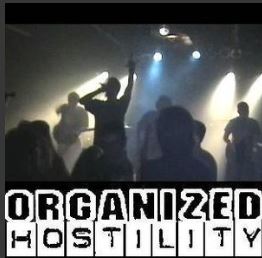 Organized Hostility formed in 1999. They quickly started working on a style and sound, as well as forming their beliefs and goals as a band. The five-man line-up proceeded to write a play list of songs, infested with brutal grooves and laced with political activity. The drums are quick and the vocals agonizing. Their heavy groove oriented style is not your average angry metal music but smarter, more calculated, a planned fury.
After cornering their style, Organized Hostility hit the road, playing countless shows across the Gulf South, and gigging heavily to make a name for themselves in their home town of New Orleans, LA. By April 2000, Organized Hostility had recorded their first CD entitled “Demo 2000 (Limited Edition)”. This four-song demo showcased the songs “Ill”, “Conditioned”, “Champ-Pain” and “Wifebeater”.
Label: Not On Label ‎– none
Format: CDr, EP
Country: usa Band from New Orleans, LA formed in 1999.
Released: Nov 2001

Be the first to review “ORGANIZED HOSTILITY: CD 2001 angry metal music but smart. Free £0 for cd orders of £28+ Check all songs” Cancel reply