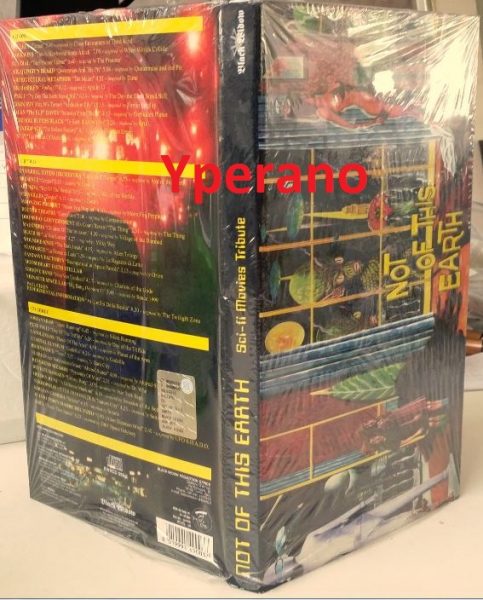 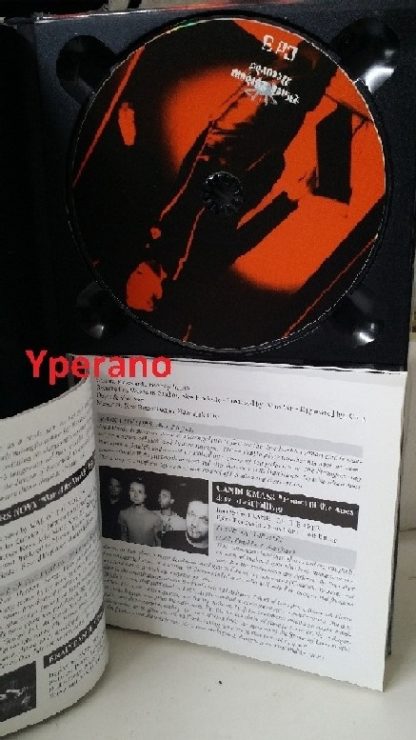 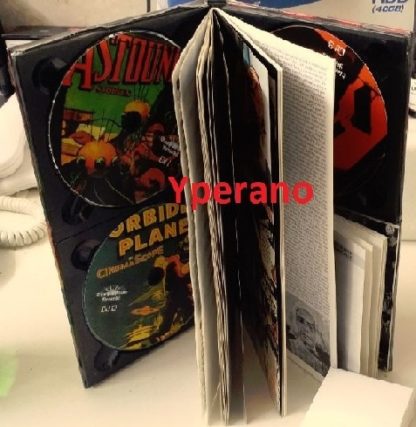 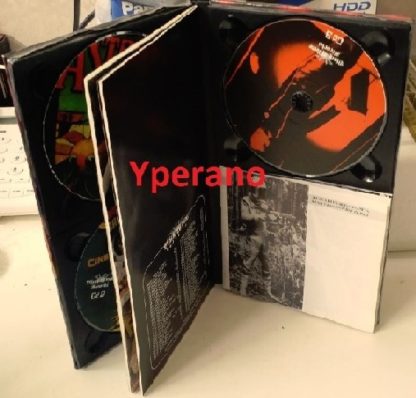 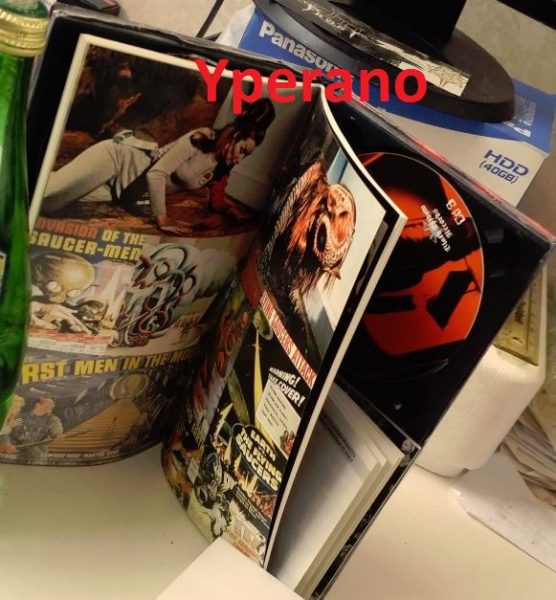 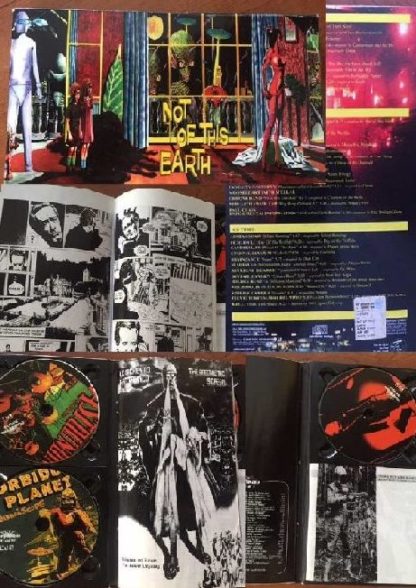 Not Of This Earth 3CD Compilation 14 cm X 26 cm 90 page book. Sci-Fi Movies Tribute. Limited Edition of 1000
This compilation contains tracks which are made as tribute or homage to famous Science-Fiction movies and books.

Not Of This Earth: A Tribute To Sci-Fi Movies””
(Black Widow 2002, BWR059, 3-CD box set)
I’ll start off by saying with no reservations that this is one of the most beautiful CD packages I’ve ever seen. The Black Widow label has pulled out all the stops for this one, and while it took quite some time to get it released the results are well worth the wait.

The 3 CD that make up the set consist of 40 bands covering the Space Rock, Psychedelic, Progressive and Metal realms (Space Rock is heavily represented), all contributing music that was supposed to have been influenced by a particular science fiction film, though television shows are included too. All tracks are exclusive to this set. A thick CD sized booklet has information about all the bands and a brief synopsis of each film. My only gripe is that they could have done a better job of listing contact information for the bands. Lots of them have web sites that aren’t listed. The good news is that the excellent pictures of Quarkspace that my wife took are included!

Also included is a 65 page book titled The Fantastic Screen with articles in English and Italian. Topics cover the development of sci-fi cinema through the years, social and political themes in the sci-fi films of the 50, The movie Them!, sex in sci-fi films, a very interesting series of articles covering Italian sci-fi films, a detailed series guide to The Prisoner television show along with a Patrick McGoohan filmography, and a Prisoner comic.

There are 40 contributors across the 3-CDS. And yes, I’m going to give you a quick rundown on all of them…

Hawkwind tribute to “”When Worlds Collide”” is actually a live version of Sonic Attack (I highly doubt “”When Worlds Collide”” was in mind when Sonic Attack was written). There was some discussion about this track on the Hawk/BOC list a little while back and what strange about it is that the lineup is listed as Brock/Davey/Chadwick/Tree, and while the music certainly sounds like it from the Love In Space era it also certainly sounds like Robert Calvert on vocals. Interesting.

Alan Davey “”Forbidden Planet”” tribute is an interesting track, having something of a Pink Floyd circa Animals sound, only much spacier. I wouldn’t have recognized it as Alan.

Adrian Shaw film of choice is “”Silent Running””. It a trademark Shaw song and you can tell by the lyrics he did write it for this set.

For his tribute to Day Of The Triffids, Pete Pavli plays synth, guitar, and viola through a delay unit to create multiple layers of repeating patterns. Very interesting and definitely one of the more avant-garde contributions to the set.

Architectural Metaphor, one of America oldest underground Space Rock bands, contributes a killer tribute to “”Dune””, with Paul Eggleston massive keyboards and Greg Kozlowski ripping and highly intense guitar licks. These guys excel at combining cosmic and symphonic elements. Stylistically this would be very much at home on their Creature Of The Velvet Void album.

British space rockers Dr. Hasbeen cover “”Apollo 13″” and the music is very much like what I’ve heard from them in the past, being a pounding slab of heavy Hawk rock. Very nice.

Right along the same lines is PXR.1, ex-Spacehead member Phil Howard band whose tribute to “”The Day The Earth Stood Still”” sounds almost exactly like mid-90 Hawkwind, but it a very cool track all the same.

Finnish spacers Dark Sun have, regrettably, only released one full length CD of original material, so this lengthy track recorded live with Nik Turner on sax is a much welcome addition to the set.

Texas space-punk greats ST-37 tribute to “”Metropolis”” is of particular interest because the band have performed the soundtrack to the film live as it was being shown, and indeed this track is from one of those shows, recorded live at the Alamo Drafthouse Cinema in 1998. I’m a huge fan of “”Metropolis”” and would LOVE to have seen one of these performances.

Nirnaeth Space Lab is an mightily impressive space rock band from Italy who I’d never heard of before. Their tribute to the “”Space 1999″” TV show is a total cosmic freakout. Really pounding brain slamming stuff. Most definitely a band to check out further.

I know Paul Chain has been around and apparently has a lot of recordings available but I’ve never heard his music before now. His tribute to “”The Twilight Zone”” series consists of very intense space electronics and more, designed just perfectly for a film soundtrack. At 8 minutes it one of the longer tracks of the set and has a dramatic narrative feel throughout. Most excellent.

Krel Martin M. (who by the way finally has a new album out soon on Dead Earnest) does an absolutely luscious tribute to “”2001 A Space Odyssey””. Floating ambient space, soundscapes, and meditative bliss are all the order of the day here. Quite beautiful. But there also a hidden bit where it looks like Krel get 13 minutes but the music ends after about 8, and then after several minutes of silence we get classic soundbites from “”The Prisoner”” and a very brief but blazing rocking rendition of the theme to the show.

Malleus is Enrico Ragni and his tribute to “”Close Encounters Of The Third Kind”” incorporates the recognizable notes from the film used to communicate with the extraterrestrials into a majestic slab of floating symphonic space.

Though I think they’re better known as a doom-metal band, Candlemass’ tribute to “”Planet Of The Apes”” sees the band using mostly strings to create dark atmospherics, and does so to eerie effect.

You can probably tell from their name that Fulvio Tori Madre Del Vizio are from Italy, and their tribute to the UFO S.H.A.D.O. television series is a very short but very cool electro space rocker with a good mix of heavy electro-rock and dreamy sympho bits.

Fantasyy Factoryy are a British acid psych band. I’ve got one of their CD which incidentally was produced by Gary Ramon of Sundial. Their tribute to “”Orion”” is a high energy rocker that is very different from the music on the CD of theirs I have.

Mooseheart Faith Stellar Groove Band tribute to “”Chariots Of The Gods”” is performed in a gorgeous early 70 heavy prog-psych style. I really like these guys.

From Finland, Moon Fog Prophet counts among it members Mika Ratto of Circle. Their tribute to the film of the same name (never heard of it) has elements of early 70 heavy prog with guitar edging out the keyboards a bit as dominant instrument.

Universal Totem Orchestra is an Italian band that in 7 minutes runs a stylistic gamut from classic orchestral progressive rock, complex avant-prog, ripping rock, and jazz. And they have an excellent operatic female vocalist.

Presence is an Italian band whose tribute to “”Contact”” is a metallic brand of heavy guitar/keyboard dominated progressive rock with little spacey bits peppered throughout. Some of it is a little too accessible for me but the band do display some more intricate compositional skills. And another impressive female vocalist.

Wounded Knee is an Italian band who plays a similar brand of heavy progressive rock with metal influences on their tribute to the “”Alien”” trilogy.

Standarte are an excellent Italian band that I’m well familiar with. This is a bit laid back for them but it may well suit the film it from, an Italian flick called “”La Ragazza di Latta””.

Doctor Theatre is from Texas and is apparently one guy named Stephen Romano on all instruments. His tribute to “”Contamination”” is a heavy but ethereal brand of progressive rock that was apparently originally recorded by the great Italian band Goblin.

Ars Nova is a Japanese keyboards/bass/drums trio that are heavily influenced by ELP and their “”War Of The Worlds”” contribution is precisely in that style. So if that your cup of tea you should note that they do it pretty darn good. The band consists of three impish women and I’ll never forget seeing them at the ProgDay festival a couple years ago when right in the middle of their set one of them came out in a leather and whip getup and did this weird S&M act to a drum solo and then nonchalantly launched back into their full band ELP thing. Pretty wild.

Versailles is an Italian band whose “”Zardoz”” tribute is a dirty rocking style of progressive rock but with both organ and symphonic keyboards. Good stuff. I’d like to hear more from them.

Malombra is from Italy and their “”Village Of The Damned”” tribute is a pounding slab of theatrical progressive metal. A very cool sound. I’ll have to explore more of their music.

Helden Rune, also from Italy, play a dark, Gothic, orchestral music with a definite soundtrack feel on this tribute to “”Invasion Of The Body Snatchers””.

I’ve never heard of Sethian and there pretty much no information about them here except to note that they were formerly a band called Nattvindens Graat. But their tribute to “”Altered States”” is a fairly standard heavy metal tune with keyboards to give it a progressive rock edge. Nothing exciting.

I really like Japanese stoner-psych band Eternal Elysium two albums on the Meteor City label and their tribute to “”Godzilla”” is a pounding, acidic, mind-bending take on the classic theme from the early Godzilla flicks.

Reverend Bizarre are a Finnish band I’ve never heard of who do an all too brief tribute to the “”Dr. Who”” series. It metallic but spacey and electronic. I’d be interested in hearing more from these guys.

Peter Frohmader does his classic keyboard and electronics thing for a tribute to “”Saturn 3″”. An excellent mixture of symphonics and orchestral electronica.

Death SS is an Italian band whose tribute to master of surrealism Luis Bunuel “”Milky Way”” is characterized by dark Gothic electronica that has a drifting quality, but also includes dance beats and bleepy alien sounds.

Deviate Damaen are from Italy and use pounding dance beats and efx’d narrative voicings in their tribute to “”Star Trek””, in this case focusing on the Borg.

If you’re still craving dance beats and electronica, Kirlian Camera will fit the bill with their tribute to “”Solaris””. Rave beats, a brain piercing electronic laser beam, atmospheric keys, and super intense vocals make this one of the more interesting of the electronica entries on the set.

Doomsday Gouvernment are from Sweden and apparently evolved from a band called Count Raven. Their tribute to The Thing is very short and other than it being decent soundtrack music there not much to say about them.

This compilation contains tracks which are made as tribute or homage to famous Science-Fiction movies and books.
most artists who feature on this album are affiliated with Black Widow Records.
It comes and with a 90 page book containing extensive liner notes about Science-Fiction movies in Italian and English language. The comprehensive book of this sprawling showcase provides numerous, previously unpublished photographs of exquisite, high quality paper. 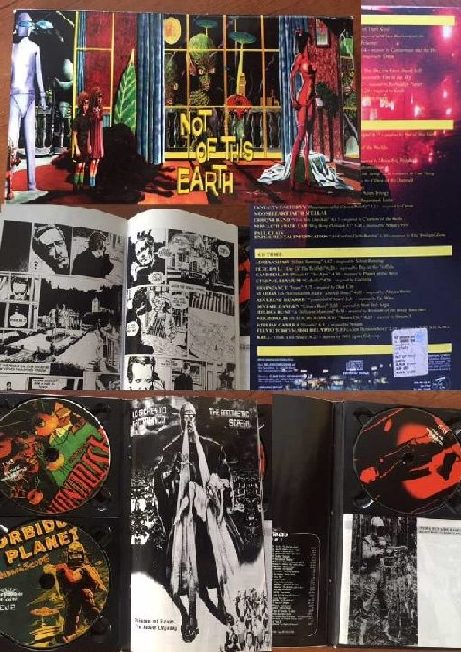 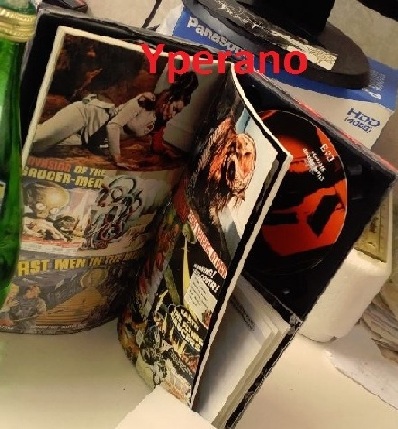 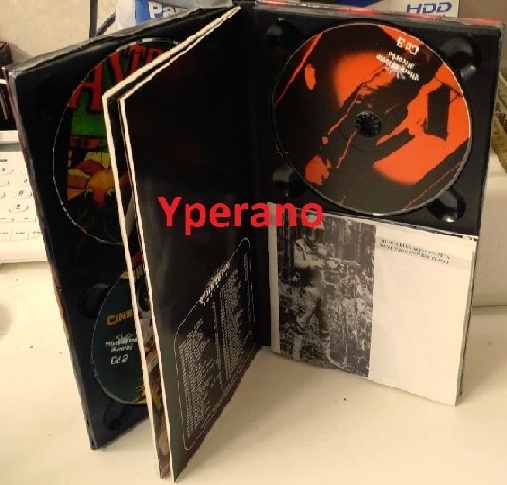 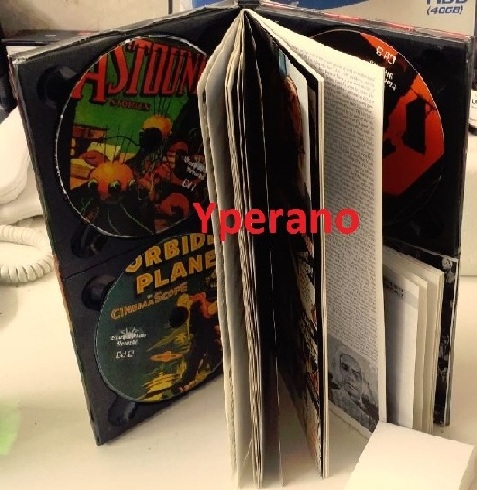 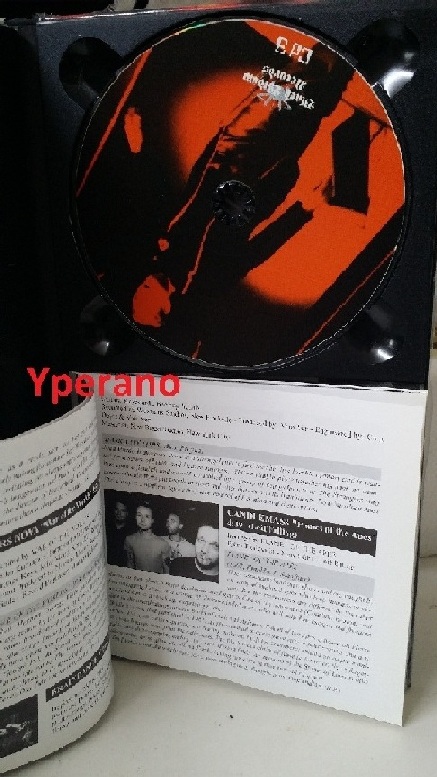 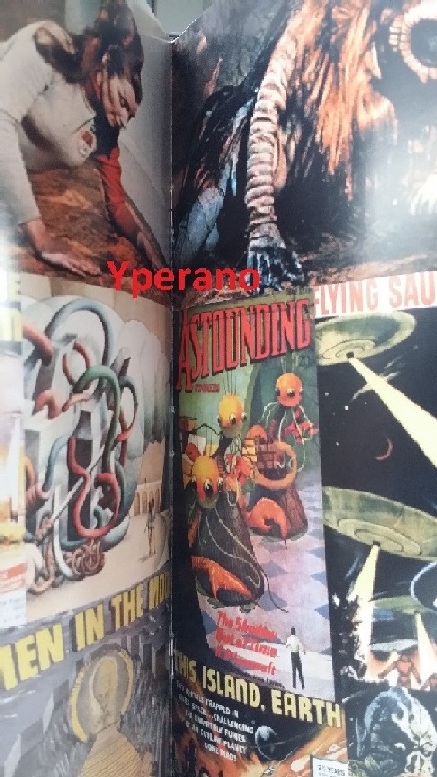 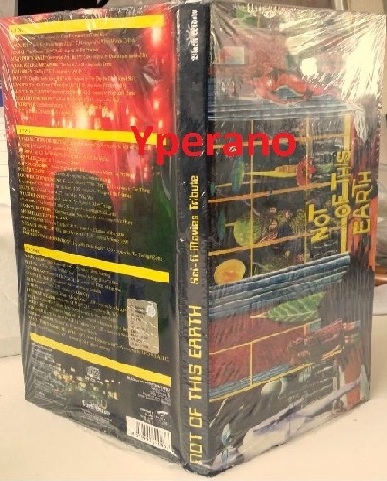 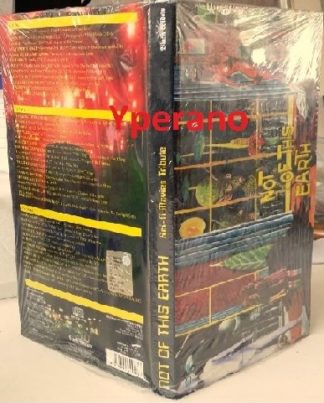