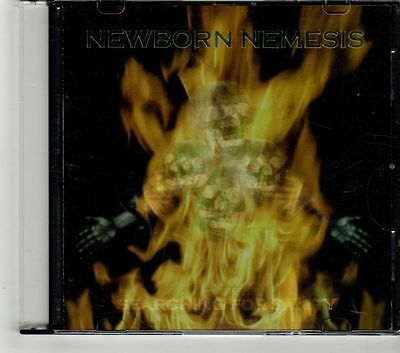 Newborn Nemesis – “Searching for Sanity”
(Independent, 2004)
“Searching for Sanity”, their debut mini album, hits the mark in a very pronounced fashion. Following on from their outstanding self-titled demo, the band formerly known as Cerberus are in an experimental mood this time around, mixing up their hardcore and thrash influences with some more traditional melodic fare. And while on paper this may sound like just the right ingredients recipe for yet another cliche-ridden “”melo death”” outfit, “”Evolution”” and the punky “”Middle Finger Salute”” prove that the band still owe more to The Haunted than they do to the tawdry likes of Caliban. At the same time however, the addition of twin-guitar harmonizing does detract somewhat from the music’s overall impact — at times overstepping the mark and becoming downright unwelcome, as in the case of the title track’s opening bridge. But it’s early days still for Newborn Nemesis, and at the rate they’re evolving at this point, it should surprise no one when they start getting mentioned in the same hushed tones as their peers very soon.

‘Newborn Nemesis’ who were originally called ‘Cerberus’ and who played Esquires in December. Again they delivered an awesome set, indicative of a band that has shared a stage with such names as ‘Mastodon’, ‘Exodus’, ‘Testament’, ‘Death Angel’ and ‘Entombed’ in the past few months.
Newborn Nemesis have now finished a 7 track mini-album called ‘Searching for Sanity’ which featured a track on a cover CD with the December edition of Terrorizers and gained some respectable reviews in the music press. The Esquires faithful were certainly not disappointed by their set on Saturday – come back soon!