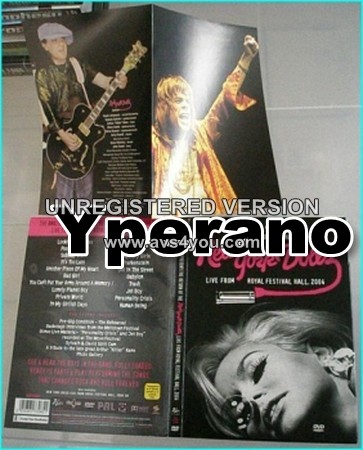 Full title – Morrissey Presents – The Return of the New York Dolls – Live from The Royal Festival Hall, 2004. UK live release captures the three surviving members, David Johansen, Sylvain Sylvan, & Arthur ‘Killer’ Kane, reunited after 27 years at the request of Morrissey for the Meltdown Festival.
——————————————————————————————-
This was a superb live show! Never in my wildest dreams did I think I’d live to hear these old classics played with such intensity by at least some of the original guys in the band. David Jo’s voice has aged considerably over the past 30 years, but for the better. Syl and the new guy Steve Conte do a great job of recreating the twin guitar cacophony that defined the Dolls’ sound.
——————————————————————————————-
5.0 out of 5 stars Wonderful!,
The Dolls tore it up in this concert, period. The band is extremely tight here..Steve Conte, Gary Powell, and Brian Koonin provide a very solid foundation for Arthur, David, and Syl.
Brian held it all together as arranger. Gary really makes things swing…great drumming. Steve Conte is what Johnny Thunders would have been like sober and clean – I can’t think of a better replacement for Thunders. The (Dolby 5.1) sound is fantastic. The guys look good and very happy to be together. It just is very nice to hear these guys play so tightly and with so much conviction. “”Jet Boy”” is the best version I have heard. The liner note from David Jo is a wonderful reflection, very heartfelt and eloquent. Great DVD, buy it!
——————————————————————————————-
5.0 out of 5 stars A Fix And A Kiss…,
If everyone who now claims to love the New York Dolls had actually bought their records back in the 70’s, past and present members of the band would have been making big coin from royalties for the past 30 years instead of wallowing in relative poverty and obscurity. Admittedly, the Stooges unwittingly invented punk rock in and around the college town of Ann Arbor, Michigan back in the late 60’s, but the Dolls brought it to art-form level with an injection (no pun intended) of heroin chic that would make Keith Richards blanch, influencing everyone from the Ramones to the Sex Pistols to Hanoi Rocks along the way. I’ve even seen photos of alt.country flavor-of-the-month Lucinda Williams wearing a Dolls t-shirt. It’s your call whether she knows how to spell “”irony.””

In their heyday, the New York Dolls were fuelled by every substance known to man and while they never actually set the charts alight, they did to anything else that got in their way, as evidenced by the number of dead former members, which now doubles that of the living. To be fair, though, bassist Arthur “”Killer”” Kane’s ticket was punched by complications from leukemia (shortly after this reunion show at the Morrissey-curated Meltdown Festival last summer) rather than anything in liquid or powder form, which is not to say his fringe of blonde hair was ever mistaken for a halo.

Obviously, the biggest question surrounding the reunion was whether Kane, David Johansen, and Syl Sylvain had the right to call themselves the New York Dolls without the late Johnny Thunders or, at the very least, the similarly mouldering Jerry Nolan on board. “”Morrissey Presents…”” answers that with an unqualified and resounding “”yes”” even before the end of set opener “”Looking For A Kiss.”” To their eternal credit, Johansen and Sylvain bring a geniune sense of enthusiasm, pride, and mirth to the boards when they could just as easily have phoned everything in. The ever stoic Kane’s emotions are a little harder to gauge lurking behind his Thunderbird, but he plunks away with what for him passes for a sense a purpose. One of the eerie things about watching this disc is that it’s almost as if Johansen and Sylvain knew Kane’s days were numbered, showering him with love, affection, and several smooches on the mouth and forehead. Somewhere, my old man is spinning in his urn.

Johansen’s thinner now than I ever remember him – bordering on gaunt – but remains one of rock and roll’s best front men ever, something that was mostly overlooked back in the days when he used to dress like a crack, er, Quaalude whore. Despite his career getting lost somewhere between those first two amazing solo albums (“”David Johansen”” and “”In Style””) and subsequent turns as Buster Poindexter (a move which broke my heart) and grizzled bluesman with the Harry Smiths, his star remains undiminished. He ain’t too shabby on harp, either. The lines in his face are now starting to deepen perhaps in response to years of carrying around a set of lips which have now exceeded Jaggerian proportions, prompting my son to look up from the latest copy of Detective Comics and ask “”Hey Dad, who’s the old guy?”” Later on I checked in the mirror for ear hair.

Sylvain anchors the proceedings, much like he did some 30-odd years ago, and provides comic relief by playfully razzing Johansen about being his lover. For my money, he was always the oddest member of the band (and with five guys like the Dolls, that’s saying a lot), content to exist in the long shadows cast by Johansen and Thunders like Marc Bolan’s kid brother. His talent as a player and songwriter shine brightly on those early post-Dolls solo albums, minor gems which are long overdue for digital upgrade. His cover of Thunders “”You Can’t Put Your Arms Around A Memory,”” which segues into “”Lonely Planet Boy,”” is one of the highlights of this show despite making me tear up.

The set list draws from tried-and-true, lived-in anthems from the band’s two studio albums which have always received heavy rotation on Planet Paull, like “”Puss ‘n’ Boots,”” “”Vietnamese Baby,”” “”Pills,”” (yeah!), “”Mystery Girls,”” “”Trash,”” and “”Personality Crisis.”” If you’re a hopeless romantic like me, who still wants to believe in the power of rock and roll but deep down realizes it’s all over but the shouting, the staggering roar these guys generate on stage is nothing short of triumphant, 90-some odd minutes of soul cleansing, purification, and – dare I say? – a near-religious experience. And to think that just last week, I couldn’t even pronounce “”hyperbole.””

Complete and humble apologies are due to guitarist Steve Conte (ex-Company of Wolves/Crown Jewels) and Libertines drummer Gary Powell whom this scribe referred to in his Best of 2004 list as “”ringers.”” In retrospect, outside of Walter Lure, it’s hard to imagine anyone other than Joe Perry-lookalike Conte filling in for the hopeless Thunders. At times, he eerily seems to be channeling Thunders from the beyond but unlike his predecessor, remains upright, resists the temptation to refer to audience members as “”douchebags,”” and makes less mistakes. He positively soars throughout this performance, hits his marks, and leaves the spotlight to Johansen, Sylvain, and Kane. He’s my new guitar hero.

Powell looks death in the face and doesn’t blink, completely unfazed at the prospect of spotting Nolan behind the traps and what he may lack in stage presence he more than compensates for in sheer sonic braun and a driving, compact, and unflinching timekeeping sense. Without Conte and Powell, it’s easy to imagine this whole house of cards collapsing pretty quick.

It’s probably a given that without an assist from Morrissey, who wrote a book about the New York Dolls before joining with guitarist Johnny Marr to create background music for running a warm bath and tapping a vein in The Smiths, we’d all (well, some of us) still be sitting around waiting and hoping for this reunion to take place, much like that long-promised new Stooges studio album which I’m going to give one more year before giving up hope on entirely. But it sure would have been nice if BMG could have seen fit to relegate Captain Bringdown’s name to the back cover of this disc instead of the front and give the Dolls their moment in the sun for once in their sorry-ass lives.

Having been lucky enough (in 74 or 75….I’d have to dig out my ticket stub) to see the Dolls live at the Theatre at Madison Square Garden, (formally called the Felt Forum), where they opened for Mott The Hoople, I can tell you what they were 30 years ago. Loud, Rude, and in your Face!…in other words…Great! Nobody on Earth was doing what they we’re, and it was really only after they broke up that the masses realized what the Dolls were all about! I have seen David Johansen in pretty much every incarnation since (DJ Group, Buster Poindexter and the Banshees of Blue / Spanish Rocketship Band, and most recently, with the Harry Smiths), and he has never failed to prove that he is a true Chameleon of Singers, never allowing himself to be stuck in a commercial “”groove””.

Ok..ok…..on to the present….when I first got this DVD home, I popped it into my computer. While the picture was fantastic, I was immediately disappointed by the sound. The band sounded SO loud that I barely could hear David singing at all. I was convinced that either it was a bad transfer to DVD, or even worse, a bad mix at the show itself. However, when I put it into my real DVD player and my 36″” Sony Digital TV, I was thrilled. Obviously, nothing but a top of the line soundcard can handle the Dolby Digital 5.1 Surround Sound and 2.0 stereo.

This show, along with the bonus footage, is Rock & Roll history. The New York Dolls sound just as great as they did 30 years ago. David is in great voice, and great mood and humor. Sylvain is fun and is playing well, trading occasional quips with David on stage. Arthur Kane..What can I say? His passing only a month after the show gives a special meaning to the fact that he consented to do this gig. Although it would have been great to see the late Johnny Thunders play, Steve Conte (?) fills in admirably on guitar, replicating JT’s licks. Rounded out by Brian Koonin on keys (I’ve seen him with David many times before), and a fantastic Gary Powell on drums, the re-formed Dolls tear through a set of hadda-plays! Highlights include, of course. Personality Crisis, Trash, Jet Boy, Lookin’ for a Kiss, but also unexpected gems such as a rendition of Piece of my Heart, Human Being, and a ripping version of Pills (I don’t think that’s on the CD version of this show), among many other great Dolls “”Hits”” (snicker!).

First time I listened to it I gave it a 4 +. Having listened to it several times now, it stands out as a Classic. Steve Conte does a great job filling in for Thunders! Gary Powell on the drums swings too!

Do yourself a favor, BUY IT!” 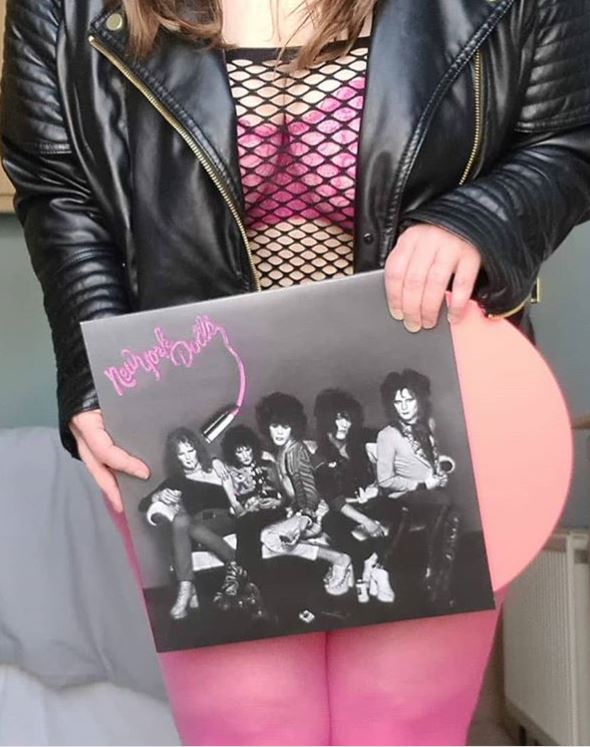 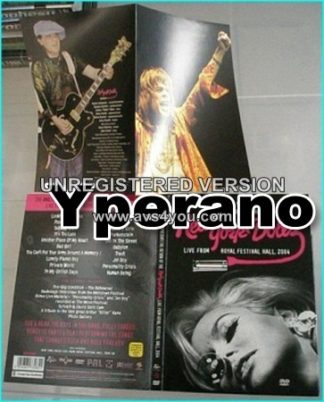