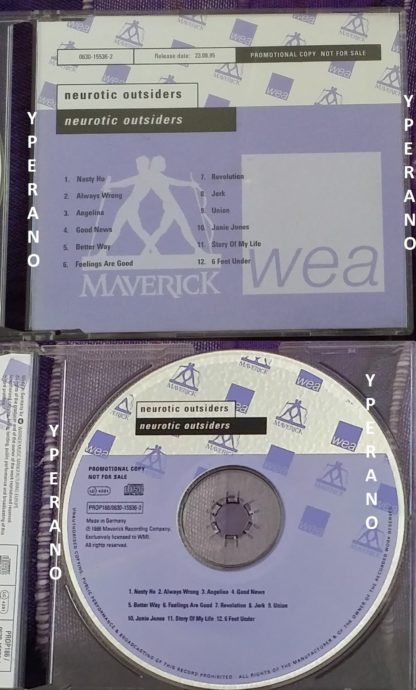 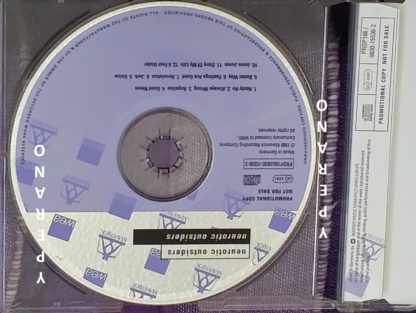 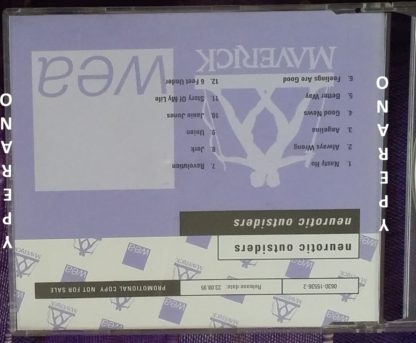 Neurotic Outsiders was a supergroup founded in 1995, consisting of John Taylor of Duran Duran, Steve Jones of the Sex Pistols, Matt Sorum and Duff McKagan of Guns N’ Roses.
Originally a gathering of friends jamming together at the Viper room, they eventually recorded this album, and did a brief tour of Europe and North America.
They reunited briefly in April, 1999 for three shows at the Viper Room.

ITEM CONDITION: This is in mint condition
SAMPLES: www.allmusic.com/album/neurotic-outsiders-mw0000185545
This wasn’t the first time Guns N’ Roses members and Steve Jones had collaborated. Axl Rose from Guns N’ Roses, and Ian Astbury, Billy Duffy, and Mickey Curry, all from The Cult, which Matt Sorum played with both before and after Guns N’ Roses, all made guest appearances on the Steve Jones solo album Fire and Gasoline.

All tracks composed by Steve Jones except where indicated
“Nasty Ho” 4:32
“Always Wrong” (John Taylor) 3:25
“Angelina” 2:55
“Good News” 3:32
“Better Way” (Jones, John Taylor) 4:22
“Feelings Are Good” (John Taylor) 3:23
“Revolution” 3:48
“Jerk” 4:10
“Union” 4:29
“Janie Jones” (Joe Strummer/Mick Jones) 1:53 (The Clash cover]
“Story of My Life” 4:10
“Six Feet Under” (Jones, Duff McKagan) 4:00
——————————————————-
5.0 out of 5 stars FanFRIGGINtastic!… (Steve Jones still rocks!…),
This is an excellent album. It sounds like a perfect mix of the Sex Pistols and Guns and Roses. Which makes sense because Neurotic Outsiders is made up of ex-members of both bands. Although I like the Sex Pistols a lot more than G’n’R and although this album reeks of G’n’R it doesn’t take anything away from the greatness of this album. (G’n’R had some [good]… songs anyway). Most of the songs are about girls, sex etc. There is also a different sounding cover of Janie Jones (originally preformed by the Clash). Punk rock fans and good old rock ‘n’ roll fans…this ones for you!!!
——————————————————-
5.0 out of 5 stars Great band,
I love this record. I was thrilled when i first heard about these guys forming a band. Just a fun alternative rock record. They all went about this project with the right attitude, for fun. John Taylors playing really is on the mark , you never really got to hear him in Duran Duran, but he shines on bass and as a vocalist. Another surprise, is Duff McKagan he switched from bass to guitar with NO and his riffs are great. Upon just listening to the cd i thought most of the solos was Steve Jones playing but i was fortunate enough to see these guys live and Duff did the majority of the solos. I only have to complaints about this album , one is that they did not include the great cover of the classic Duran song ‘Planet Earth’ and the other is Steve Jones’ vocals, John and Duff should have sang on all of the tracks but i am not complaining. I would love to see these guys get together in there down time for another go around.
——————————————————-
5.0 out of 5 stars This is a great album,
I think the combination of Steve Jones and John Taylor works brilliantly. I did not know anything about Steve Jones prior to hearing this album although I remember the Sex Pistols of course. However I liked this album immediately mainly because of Steve’s guitar playing. My particular favourite tracks are “Nasty Ho” and “Angelina”. I would recommend this album to anyone as one that will really grow on you.
——————————————————-
5.0 out of 5 stars Neurotic Outsiders are neurotic,
One of the top 5 best albums of all time! IT has individual songs by such greats as Steve Jones of the Sex Pistols and JOhn Taylor of Duran Duran. now I am not a big fan of Duran Duran but John Taylor song about losing his Dad is incredibly touching…Steve Jones penned a song called “union” which is absolutely amazing in terms of his delivery, and writing. It has such depth and longing. Anyone whose been lonely needs to check out this CD specifically for this song…MUST BUY!!
——————————————————-
5.0 out of 5 stars Not for everyone,
This album is only for a select group of people… they are – Guns N Roses fans, Sex Pistols Fans, Johnny Thunder Fans. This combines a common point between those bands and embodies it within Steve Jones – the thing is this is a very strong album if you fit my background, and includes such balady rock numbers as Angelina, and more brooding numbers such as “Feelings are good”. Of course there are the normal trite profanity songs which you would expect of this kind of band (“your a b*tch, I’m a jerk, I don’t think that this will work”) which after all, was made up of Matt Sorum and Duff MacKagan from Guns N Roses, the bass player from Duran Duran and the legendary guitarist from the Sex Pistols. If you are willing to overlook this vulgarity (or even if you aren’t) this is generally a fun album harking back (even reminiscing about) the earliest days of punk with some added complexities.
——————————————————-
5.0 out of 5 stars Pre Velvet Revolver,
I think for any fans of Velvet Revolver should look at this album. With the back bone of the band being former Gunners Matt Sorum and Duff Mckagan providing the driving hardcore rhythm, it rocks from beginning to the end.

Be amazed at how similar it sounds to Velvet Revolver!
——————————————————-
5.0 out of 5 stars on the eighth day he created this band
Thank God someone’s still making b***s to the wall rock n roll.
Guaranteed to make a teenager out of any old git. Well done !!!
——————————————————-
5.0 out of 5 stars A real Rocker!!!,
This is an amazing cd. The unfortunate thing about it being the time of release(1996). The record label didn’t promote it and “rock” radio were still spinning whiny losers like Pearl Jam and Smashing Pumpkins.
This cd was made by 4 guys, have that “attitude” in their blood. Money and fame can’t take the punk out of Steve Jones & co. You could tell these guys had a great time recording this cd. It is full of energy and great hooks & grit. These songs are what that “have a good time pissing off your parents” attitude are all about. Listen to Nasty Ho, Feelings are Good and Revolution. Jones, Duff and Matt have established themselves as legends as Rock-Punk hybrids. Just listen to what they are doing now–Velvet Revolver.
The big surprise is Jouhn Taylor. I don’t think anyone really expected him to be so raw and untamed. His songs really stand out.
Pop this cd in if you need a little inspiration to raise some hell, work out, rock out or to appreciate the talents of 4 killer musicians.
——————————————————-
5.0 out of 5 stars STEVE & JOHN ROCK, This album is one of my favorite albums great songs its a shame about the rest of the group but the rests ROCK!!!!! 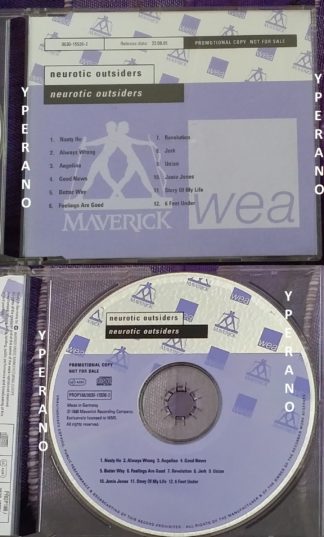