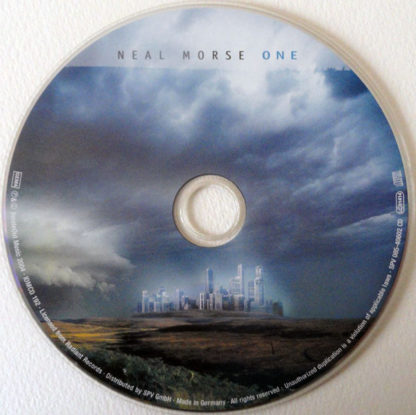 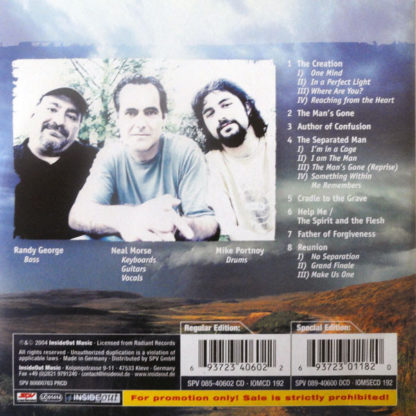 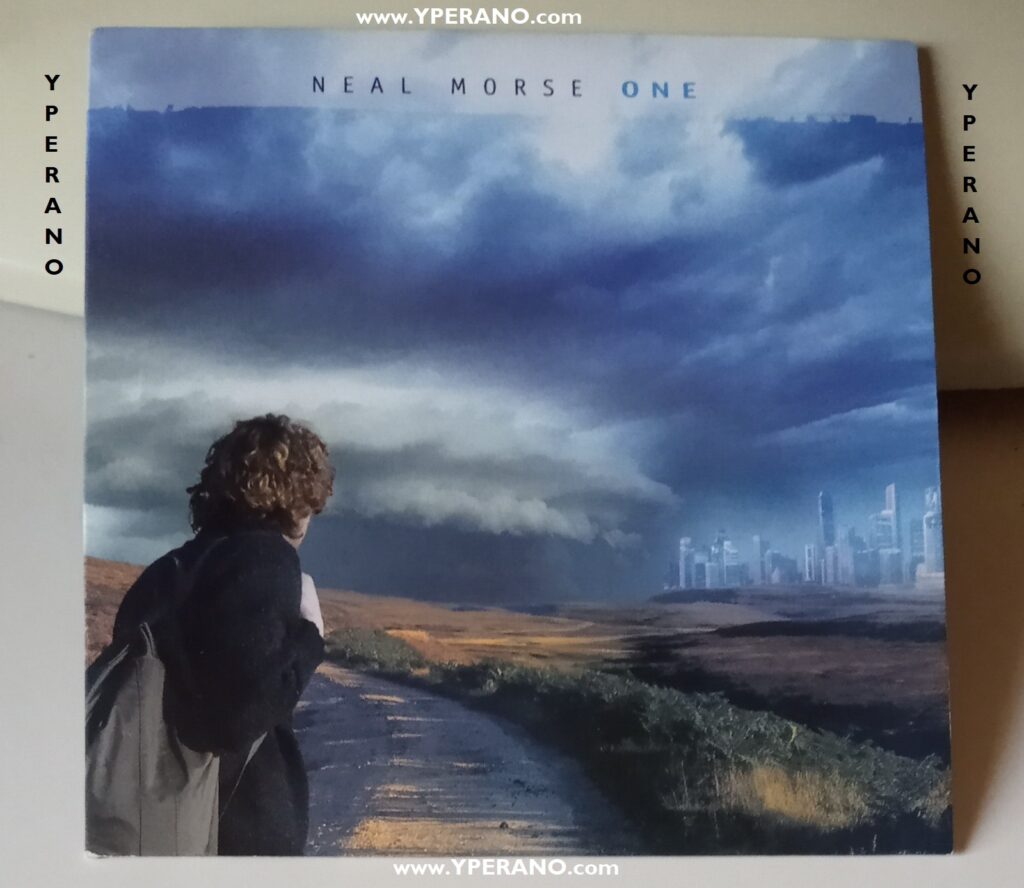 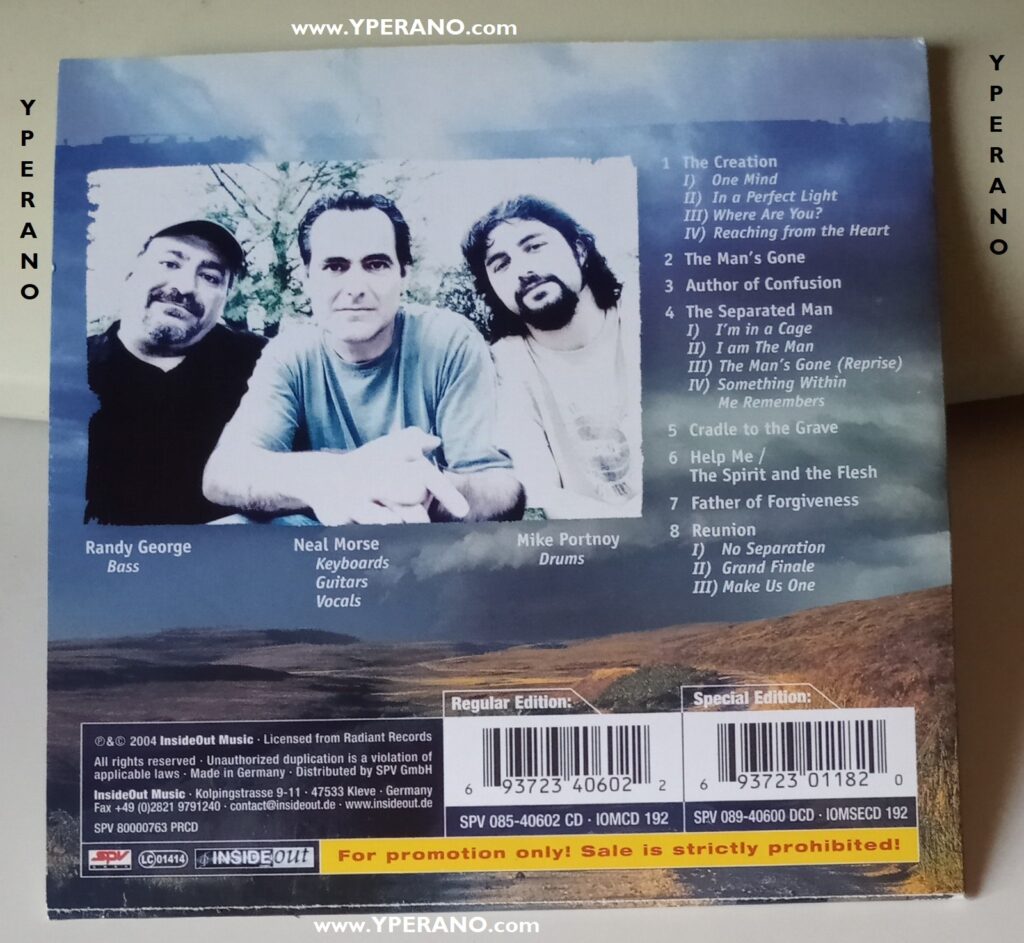 This Christian artist Neal Morse. Neal was formerly with neo-progressive rock group Spock’s Beard and the super-group Transatlantic. As the singer and predominant writer of those groups, he restarted a genre of music made most popular in the seventies by bands like Yes, Genesis and ELP. Fortunately, he also greatly influenced by the pop sensibility of The Beatles and thus his music is a little more modern, a little fresher and definitely more light hearted than some of the old school dinosaur bands of time’s gone past.
Neal writes big sweeping epics that are really suites of songs linked together to make great epic songs, many lasting 20 minutes or more. He uses that elongated style to create thematic albums that are often singular concepts that run through the whole album. This particular CD is about the creation of man by God, man’s fall from grace and his reunification with God. In one track you can expect to hear not only great musicianship in typical rock music formats, but he veers into jazz, acoustic, latin and symphonic music. His voice is passionate and unique though he does tend to wear his love for John Lennon right out on his sleeve sometimes. The music here is thoughtful, spiritual and considerably rockin’ music that may take several spins to really find everything that he’s doing in each song.

There are some great musicians on this album aside from Neal who can play nearly every instrument. There is also Phil Keaggy, renowned Christian singer, songwriter and guitarist. On drums is percussion powerhouse Mike Portnoy of the mighty mighty Dream Theater and a host of other metal and progressive rock acts. On bass is Randy George of the Christian progressive rock band Ajalon who is a fine guitarist and singer as well as bassist. With such a line up, even if you weren’t a big Christian fan, you know the music is going to be top notch.

The Creation opens the disc with a long suite of music about God and Adam and Eve in the garden. The end where God searches for the hiding shamed pair is extremely powerful and along the way you twist and turn through an incredible variety of music. From there you work your way through to the final epic tracks where there is reunion between man and God. At eighty minutes across several tracks, you know you are getting your money’s worth on music.
This disc is for fans of classic rock styles, but with an updated modern sound by some amazing players. It rewards the listener with great music and with a good sound spiritual message that is never cloying or superficial – it’s passionate and he means it. Well worth a look, and if you like that one, Neal’s previous release Testimony might even be better.

With ”Testimony” Morse actually got back on track of a second-born highly prolific career.Along with Mike Portnoy he played on The Beatles’ cover band Yellow Matter Custard, while at the same time he prepared his second concept album ”One”, based on the relationship of God with a Christian man.He established a supporting duo with Mike Portnoy on drums and Randy George of Ajalon on bass, while Morse was responsible for guitars, keyboards and vocals.Of course the album again features a long list of guest musicians like Phil Keaggy on guitars or Chris Carmichael on strings.”One” was eventually released on Inside Out in November 2004.
To talk about the concept is needless, it actually depends on what anyone believes.To talk about the music of Morse though is more than interesting.”One” is compiled by one CD of almost 80 minutes of music, split in three epic tracks and some shorter compositions, and the composition level is on par with the best of THE FLOWER KINGS or SPOCK’S BEARD.Very tight and grandiose musicianship all the way, exploring the fundamentals of 70’s Prog music in a contemporary way. The blend of modern and vintage sounds in melodic and deeply atmospheric textures remains Morse’s biggest weapon and the main reason the man is regarded as one of the leading figures of Progressive Rock, maybe a member of a future Prog Hall of Fame.The long tracks are full of orchestral arrangements, spicy interplays, strong breaks and sufficient melodies, filled with balanced vocal- and instrumental parts. The use of analogue keyboards next to the bombastic synthesizers and the atmospheric piano lines of Morse lead the way, though there are strong amounts of great guitar lines with both sensitive solos and more aggressive riffs.The compositions are truly magnificent with a strange twist from rich and powerful venues to lighter, more emotional textures.There has been some fantastic work done also in the vocal department, full of demanding harmonies and multi-vocal crescendos, one of the best vocal performances in a Prog album.Anyone into Classic Prog ala GENTLE GIANT, GENESIS, YES, GENTLE GIANT or KING CRIMSON will simply love Neal Morse’s personal career.

Another highlight in Neal Morse’s career.His departure from Spock’s Beard seems to have worked as a rebirth and ”One” is an excellent release of Classic Progressive Rock, served with today’s standards.Highly recommended.

Be the first to review “NEAL MORSE: One CD PROMO Inside Out Music 2004. Progressive Heavy rock. Mike Portnoy of Dream Theater on drums. MASTERPIECE! ﻿Check all songs” Cancel reply