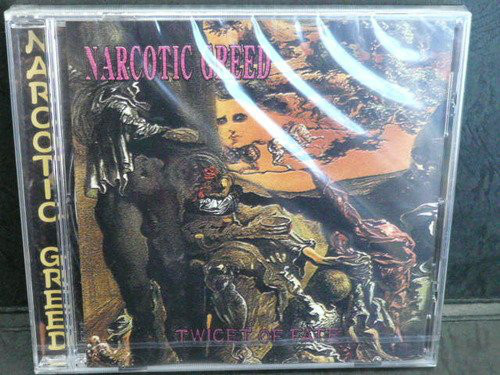 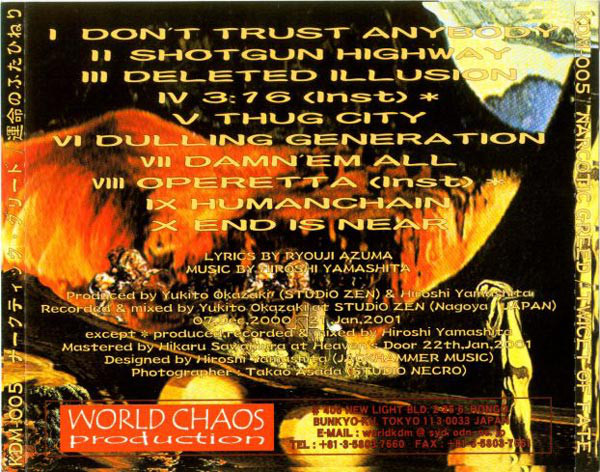 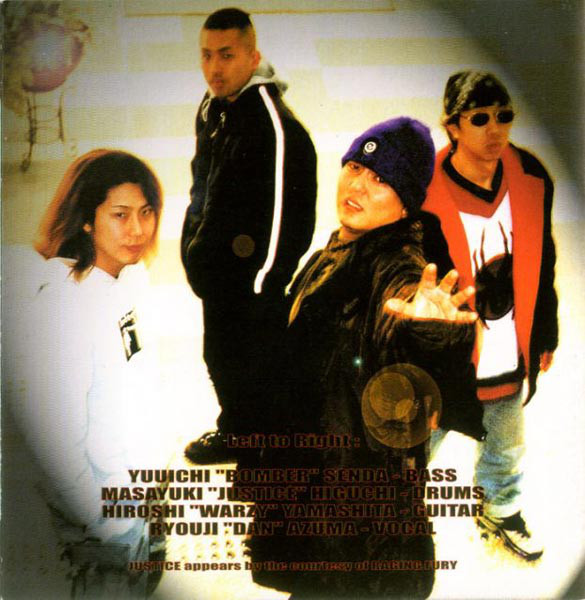 NARCOTIC GREED: Twicet Of Fate
大阪のカルトスラッシュの２００１年３月１０日にリリースされたセカンド・アルバム。古くて音は悪いが。。。聴いてくれ！ The Japanese thrash scene has never been held in quite the same regard as those in the Bay Area, Germany, or even the U.K., but thrash metal’s influence most definitely spread to the Land of the Rising Sun in the early-’80s. Bands like OUTRAGE, UNITED, and AION began making waves in the late-’80s; while Osaka’s NARCOTIC GREED—whose origins also date back to 1989—finally released their first demo, Absurd War, in 1991. Channelling American acts like Forbidden, Toxik, and Nuclear Assault, NARCOTIC GREED released two more demos between 1992 and 1993—tirelessly sharpening their teeth in preparation for what would become their debut full-length, Fatal. Released in 1994 with minimal distribution outside of Japan, Fatal unfortunately hit the streets too late for the U.S. market to consume its splendor. Though never leaving its mark on the global metal scene, NARCOTIC GREED had managed to put forth an album of pure, unadulterated thrash metal that—despite never gaining the notoriety it deserved—has become a cult favorite amongst thrash enthusiasts the world over. 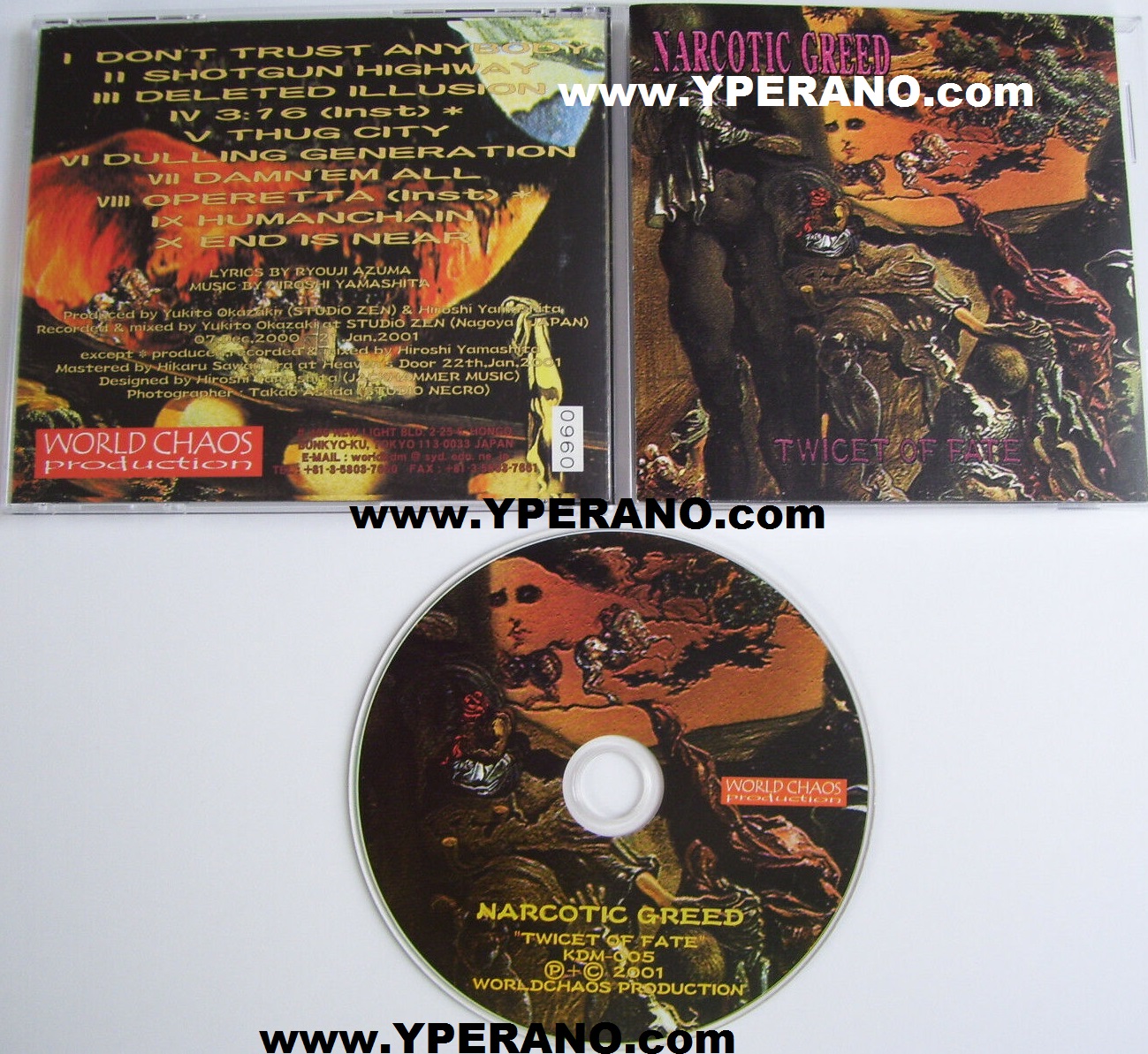 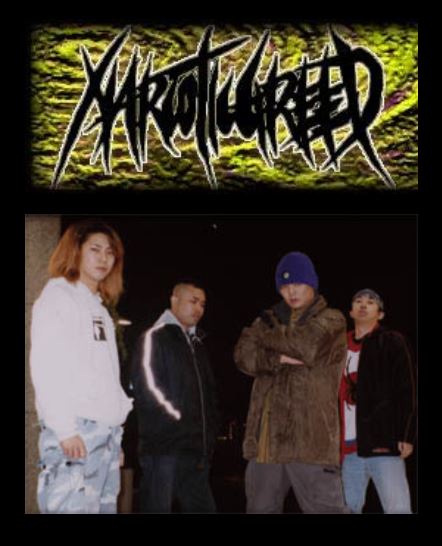 Japanese Melodic thrash metal in the vein of FORBIDDEN and DESPAIR 2nd album. Japanese import.. Mid range voice sometimes melodic, other times aggressive. This guy could sing as well in a Hard Rock band if he wanted to!! NARCOTIC GREED’s sound is pure attention-getting fast and Technical Thrash Metal.

I like to think the Japanese live in a perpetual time warp, but whatever time you want it to be is the warp they’re in. It’s like they’re a living cultural history museum for the rest of the world. This is the only reason there could possibly be a band like Narcotic Greed; this band’s style of primitive speed/thrash metal hasn’t existed since 1984 at the latest, but here they are, playing it as though it just happened yesterday.
This most closely resembles Nuclear Assault in general delivery: it’s closer to a fusion of NWOBHM and hardcore punk than it really is thrash proper, though it certainly does have substantial influences from the latter, and the delivery sounds like something you might hear in the very early ’80s overall. Granted, some concessions have been made to modernity: production values are an obvious one, and aggression and technical ability are a couple others, but overall this is a substantially more old school release than even the typical modern old school releases. Vocals are a high-pitched barking yelp which sometimes turns into a wail, right out of some forgotten thrash bands releases. They’re one of the most notable features of the music and executed pretty well.

The riffs have a great deal of punk and NWOBHM influence, and even a bit of glam from time to time, resembling the heaviest moments of Motley Crue in certain moments. In general, though, they’re speedy thrash riffs with a big emphasis on precise right hand work and rapidly changing riff sets. They’re catchy and engaging enough to be serviceable for the music, technically perfect in that they’re impeccably timed and flawlessly played. Drums are capable and technically proficient.

That’s really how most of this music goes: it doesn’t experiment much (except for a couple strange forays into clean guitar interludes) and it doesn’t really extend itself very far even within the confines of the chosen genre, but it’s well-played, intelligently composed with enough variation to keep your attention, and overall, not a bad way to headbang to. Lovers of old school speed/thrash stuff would be advised to check this one out. 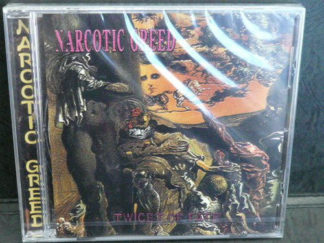